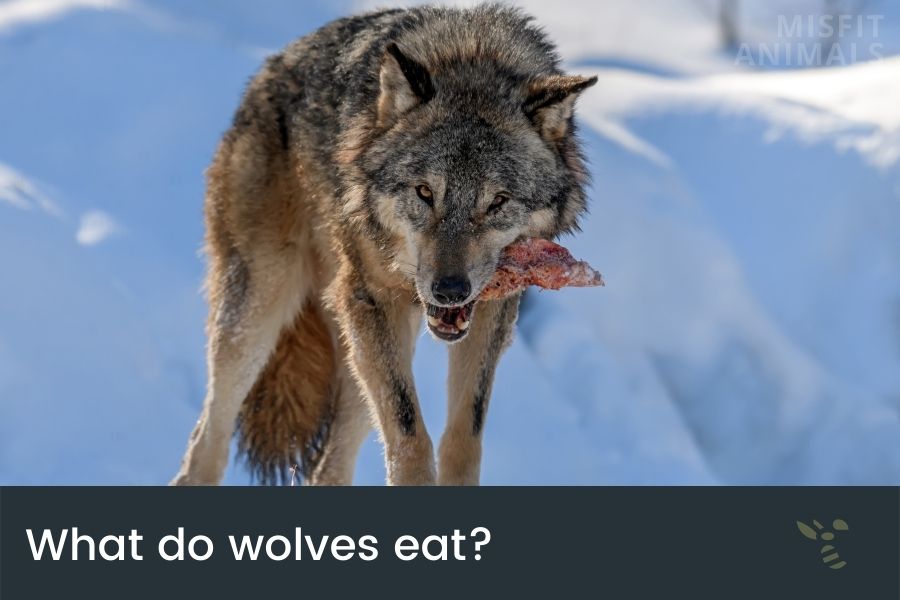 Wolves eat meat. They are carnivores, hence their diet mainly consists of meat. Wolves mainly prey on large, hoofed mammals called ungulates, such as deer, elk, and moose. They also feed on small animals such as rabbits and beavers.

The list of what wolves eat changes depending on the season of the year with some animals being more prevalent in a certain time frame than others.

The different species of wolves will also have different eating habits due to what they can hunt or scavenge better from their environment.

A study showed that wolves can adapt quickly, even turning to garbage as a food source.[3]

Do Wolves Eat Fruits and Vegetables?

Wolves prefer to eat wild prey, mostly ungulates but will turn to plant material if there’s a lack of prey.

As said, this is not wolves’ preferred food source, but in some regions there simply isn’t enough prey. Hence, they will turn to the plant material they come across.

What Do Wolf Pups Eat?

Wolf pups drink milk and eat meat. In the first three weeks of their lives, they feed on milk from their mother. After that, they switch to meat. They still depend on their mother for food until they grow older.

If no prey is around, or if there’s not enough prey, wolf pups can be fed berries or other plant material. [4]

When wolf pups are around six months old, they will start hunting for larger animals with the rest of the pack. Up until this point, they may hunt for smaller prey, as they learn to hunt.

Depending on the season, different prey may be available for wolves. As the seasons change, some animals go into hibernation, while others stay active, or become active again.

What Do Wolves Eat In the Winter?

During the winter months, wolves mostly prey on large ungulates like deer and elk. During this time of year, herbivores have less food available. As ungulates feed on plant material, their food sources will be scarce, meaning they’re weaker.

This makes them easier to hunt, kill, and eat.

Related: What do wolves do in the winter?

What Do Wolves Eat In the Spring?

During spring, wolves usually have a great selection of available food sources. Any animals that stayed in hibernation through the winter come out, as food sources start to appear again.

In the spring, wolves will feed on both large and small animals, with a preference towards larger animals like moose, caribou, deer, or similar animals.

What Do Wolves Eat In the Summer?

In the summer, wolves also have a large selection of available food sources. Their territories will be swarming with small animals such as rodents or hares, as well as larger game.

At this time, the prey will be more difficult to catch, as they’ve been able to eat more. Their prey will be healthy and full of energy.

What Do Wolves Eat In the Fall?

During the fall, small animals and fish often work as the primary food sources for wolves. There will be plenty of small animals running around, making it easy to prey on them. Salmon is also a bigger part of their diet around this time of year.

Wolves Are at the Top of the Food Chain

Wolves are predators, meaning, they’re at the top of the food chain. They’re carnivores, hunting mostly herbivores for food.

They’ve been known to eat bears and other predators as well, but they mostly stick to ungulates (if possible).

While wolves are at the top of the food chain, they do share this spot with other apex predators. They compete with other predators for food, as well as fighting with them from time to time.

Two of the most common animals that wolves prey on are moose and deer. They prefer to feed on ungulates in general. Wolves will focus on hunting these more frequently than other animals because they provide plenty of sustenance for the pack members.

How Much Do Wolves Eat per Day?

A wolf can eat as much as 20 pounds of meat in a single day. The amount of food they eat per day varies greatly though, depending on what they catch in their territory.

Wolves can survive on about 2.5 pounds of food every day, but they need between five and seven pounds to stay healthy and be capable of reproducing successfully.

The amount of food available is of course also a big factor, when it comes to wolves’ food consumption per day. Some seasons provide better availability of food, where they’ll have plenty each day, while they may go some periods without much.

How Much Do Wolves Drink?

Wolves drink around a quarter to three-quarters of a gallon each day. They get a lot of this water from their prey but do drink extra if needed.

The amount of water wolves drink depends on their climate, as well as how active they are. If they’ve been hunting all day, they need more water. Wolves in warmer climates also drink more water, than the ones in colder climates, as the heat causes them to dehydrate.

During the winter, if food is scarce, it can be difficult to find water. Most water sources may be frozen over. They may have to eat snow or ice to stay hydrated.

When wolves go long periods without drinking anything at all, their kidneys help them conserve fluid by concentrating their urine.

All species of wolves are carnivores, hence, they all eat a variety of animals. But, they are some slight differences in their diet, depending on the region they live in, and specific behavioral traits they’ve developed.

What Do Gray Wolves Eat?

Gray wolves primarily feed off of ungulates (large, hoofed mammals). These include bison, elk, deer, and moose, as these are available where the gray wolf lives.

They eat meat for their primary source of nutrients, rather than the leaves and fruits from plants or fungi like some other organisms do.

What Do Arctic Wolves Eat

Arctic Wolves are also predatory carnivores. They hunt for caribou and musk-oxen, but will also prey on smaller animals including birds, lemmings, hares, and similar animals.

Related: What do arctic wolves eat?

What Do Maned Wolves Eat?

Maned wolves are omnivores, meaning they eat both plants and meat. They don’t shy away from fruits and vegetables, which make up 50% of their diet. They’re particularly fond of lobeira (“fruit of the wolf”). Apart from fruit, they hunt for small mammals, such as rabbits, insects, and rodents. [5]

What Do Timber Wolves Eat?

The diet of Timberwolves is what makes them unique from other types of wolves. While most species can survive on rodents, rabbits, and even fish, the timber wolf’s diet largely consists of larger prey such as elk, moose, and deer.

Timber Wolves have been known to eat the smaller prey, but their diet largely consists of larger animals.

What Do Red Wolves Eat?

Red wolves are predators in the eastern United States with a diet rich in white-tailed deer. They will also prey on raccoons, rabbits, and other rodents. Unusual for carnivores, red wolves can live without meat by eating plants and they also feed on berries.

What Do Black Wolves Eat

Black wolves eat meat, primarily from ungulates, but will eat what their territory has to offer. Ungulates are considered their preferred prey. This includes deer, elk, bison, moose, and similar animals. If no ungulates are around, they will feed on small mammals instead.

What Nutrients Do Wolves Need?

Wolves are carnivores, meaning, they eat meat. Meat is very rich in protein, which is very important for wolves.

They need nutrients like protein, fat, vitamins, and minerals to stay healthy.

Ungulates, which are, as stated, the primary food source for most wolves, contain many of the essential nutrients for wolves.

They need a variety of vitamins such as vitamin B and vitamin A, but what they need the most is protein.

Since wolves are what we consider “social hunters”, eating in a group allows for more efficient hunting and better nutrition.

How Wolves Hunt for Food

Wolves hunt in packs. This is one of the main reasons why wolves are such superior hunters. There’s a very little amount of animals on the planter, that can take on an entire wolf pack, or even run away from them.

When the pack has located a prey animal, the pack will separate to surround it. They will flank on multiple sides, making it almost impossible for the prey to escape.

As they close in, they will jump on it, attacking the prey with their claws, biting into them with their sharp teeth, eventually taking them down.

As soon as the prey is down, they deliver a devastating bite to the neck. They will shake the animal violently to break its spinal cord.

Wolves will continue to eat until there’s nothing left to eat, and will also take food back to their den for family members that weren’t able to get their own meal.

Wolves, like many other predators, have evolved to hunt prey that is much larger than what they can kill alone. Their pack structure and cooperation make them more likely to catch their prey successfully during the chase.

But, sometimes wolves are running around alone. This is when they drop from the top of the food chain. Alone, wolves are still impressive hunters, but they’re not nearly as strong as the collective pack.

Bears, tigers, and other apex predators can get the jump on a lone wolf, eventually killing and eating it.

Sometimes wolves will be eaten by other wolves, but this is very rare.

Wolves primarily eat meat from larger mammals, specifically ungulates. They will also feed on smaller prey, such as rodents, rabbits, or similar animals. In cases where no prey is present, they will eat plant material in order to get their necessary nutrients (some wolves have a diet consisting of 50% plant material).

Wolves hunt in packs to kill their prey, which enables them to take down almost any animal they encounter with great success. They hunt strategically, surrounding the prey before attacking.

Yes, wolves are carnivores. This means that they eat meat from other animals in order to get their food energy from what they consume. Wolves mostly prey on large, hoofed mammals called ungulates. Ungulate is the collected category for deer and other larger hoofed animals.

Wolves will typically not eat humans. Not because they don’t like the taste, but because they tend to stay away from us. Between 1900-2000, there were no documented deaths as a result of wolf attacks. If it came down to it, wolves would eat humans though.

Wolves eat any type of animal that they can hunt, including fish. During some seasons of the year, a larger portion of wolves’ diet consists of fish, salmon being their preferred option.

Typically no, wolves are not cannibals. They don’t eat wolves. But it can occur. Especially during times of food shortage, wolves may eat others of their kind.