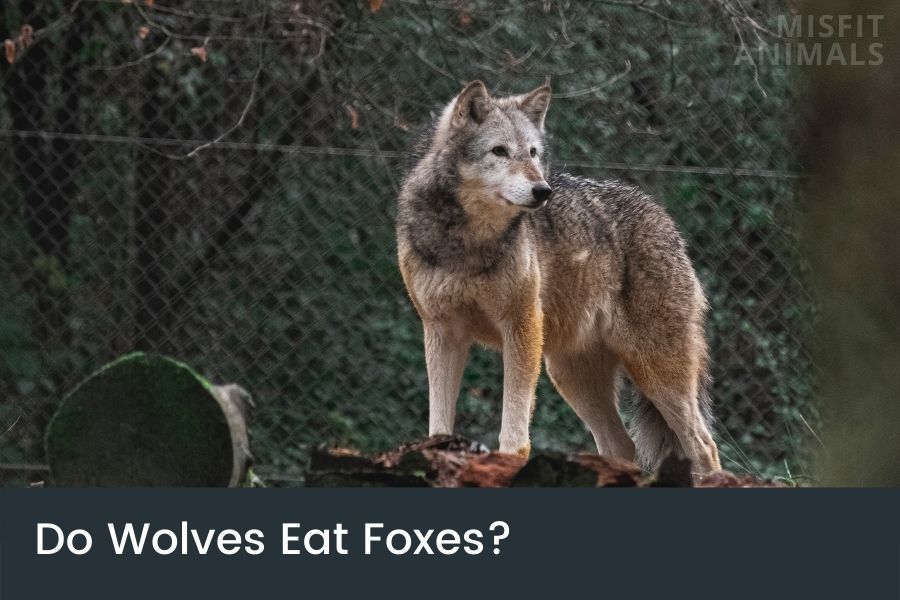 Yes, wolves do occasionally eat foxes. Wolves are carnivores, primarily feeding on ungulates, but if no other animals are around, they will hunt and kill foxes.

Foxes and wolves are relative, as they’re both parts of the Canidae family. However, wolves are much more ferocious predators, and the two animals don’t get along.

Wolves even perceive foxes as enemies, or competitors, as foxes roam around in their territories.

In this article, we’ll talk about when wolves hunt for foxes, why they do so, and why foxes typically aren’t a part of wolves’ diet.

What Do Wolves Eat?

Wolves are carnivores, primarily feeding on ungulates (large, hoofed animals). They prey mostly on these because they provide enough food for the entire pack, and they provide plenty of nutrients.

Wolves are opportunistic feeders, meaning they take advantage of the most accessible meal around.

While these apex predators prefer to feed on ungulates, they will also hunt for smaller animals such as rabbits, rodents, or even foxes. They are also been known to fish.

For the most part, wolves do not actively hunt foxes but will consume them if they come across one during their hunting activities.

Wolves do sometimes eat foxes, but it is not common. This is due to foxes’ small size and lack of nutritional value compared to larger prey like deer or elk.

While foxes can’t run as fast as wolves and hence may have a difficult time escaping, they’re still incredibly agile. They may be able to escape their larger relatives, the wolves.

Other predators that prey on foxes include coyotes, bears, jackals, and even other foxes. These animals all see each other as enemies and competition, as many of them prey on the same animals.

Wolves do not typically hunt foxes. Wolves also don’t hunt for sport, but only if they’re trying to secure a meal.

Foxes are smaller and do not make a very large meal for wolves, so they do not go out of their way to track them down.

However, if there is nothing else around, either live prey for wolves to hunt or dead animals for them to scavenge on, they will hunt down foxes.

In some cases, hunting for foxes is easier for wolves. This is due to how foxes make use of scent marking to mark their territories. Foxes spread their own, unique scent across their territory, to let other foxes know, that the territory is taken.

If wolves catch this fox scent, they’ll know that there’s most likely a fox in the area.

Why Do Wolves Eat Foxes?

There are several reasons why wolves may eat a fox:

The first reason is that it’s easier for wolves to take down a fox, compared to an elk or a moose.

Wolves will hunt in packs when hunting larger prey, but they can take down a fox alone.

The second reason is if there’s no other food in the area.

Wolves need to eat at least 2.5 pounds of meat a day to stay somewhat healthy. They need up to 5-7 pounds if they want to reproduce. Hence, they need a lot of food.

When food is scarce, wolves will hunt animals that are usually not on their radar, such as foxes.

A third reason why wolves may eat foxes is if the fox is invading their territory.

Wolves are territorial animals and will do almost anything to protect their territory and their pack. If they catch a fox roaming around their territory, or even worse, their den site, they will hunt it down.

Typically, wolves do not eat foxes because they don’t provide a very large meal. They are more likely to prey on large mammals like moose, deer, and elk, which provide an abundance of food.

However, there have been several recorded instances of wolf packs killing red or arctic foxes in Alaska.

These cases usually occur when the fox was denning near a wolf pack’s territory or if it had wandered into an area without many other prey animals available for hunting.

Do Foxes Eat Wolves? (Typically No, but They Might)

Foxes do not typically prey on wolves, but they may do so if given the chance. Wolves are larger and stronger than foxes, hence foxes can’t take down wolves unless they’re injured.

Wolves and foxes are both carnivores. Both animals are also predators, hunting live animals to feed on. However, their diet does vary somewhat.

Wolves mostly scavenge ungulates such as deer, elk, moose, and caribou while foxes opportunistically feed on a variety of small animals.

Whereas wolves may occasionally hunt foxes, the opposite is not true. Foxes know to stay away from wolves, as they can’t kill them.

However, foxes are, like wolves, also opportunistic feeders, taking advantage of whatever food they can find. Hence, if a fox comes by a dead wolf or a very injured wolf, they can indeed feed on it.

While they can choose to do so, wolves also don’t fit the category of foxes’ preferred meal. They like smaller animals, but as said, won’t pass up on a sure meal.

What Other Animals Eat Foxes?

Foxes have plenty of natural enemies, some including:

These are all animals that pose a threat to foxes, hence foxes try to avoid these predators as much as possible. This is not always possible though.

Coyotes are a major predator of red foxes. They tend to prey on foxes during the winter when they are hungriest and can track them through snow more easily than in other seasons.

Coyotes might also do this if there is not much food around for them to eat.

While coyotes aren’t as big as wolves, they’re still bigger than foxes. They live in packs but go off on hunting expeditions on their own.

Jackals are small canids that are native to Africa. Jackals do not normally eat foxes, but they may if the opportunity arises, and there is nothing else available for them to hunt.

The jackal population in southern Israel has increased in recent years due to an abundance of rabbits, which is one of their main prey.

Bears are another predator of foxes and can be a major threat to them. They are opportunistic predators, meaning they will eat whatever is available to them.

While bears prefer to eat other animals, such as fish, they will take advantage of a stray fox crossing their path.

Bears tend to kill their prey by crushing the skull or neck. They have been known to kill young deer and elk, as well as coyotes, raccoons, and other small mammals.

While it may be rare, foxes do eat other foxes. This is not a common sighting, and will mainly occur if a fox is on the brink of starvation. During times where food is scarce, they’ll look for alternative prey, such as weaker foxes.

Foxes are, like wolves and other predators, very territorial. They leave scent marking around their territory. Through these scent markings, foxes can even smell how dominant another fox is, and can, based on this information, decide whether or not to stay away.

Wolves typically don’t eat foxes, but it does happen. While wolves prefer to eat ungulates or other smaller herbivores, they occasionally do hunt down foxes and eat them.

This mainly occurs for two reasons: the wolves aren’t able to find other food, and hence prey on foxes to avoid starvation, or a fox has crossed into their territory, which triggers wolves to kill it.

There are also many other predators that occasionally will prey on foxes. These include coyotes, jackals, bears, and even other foxes.