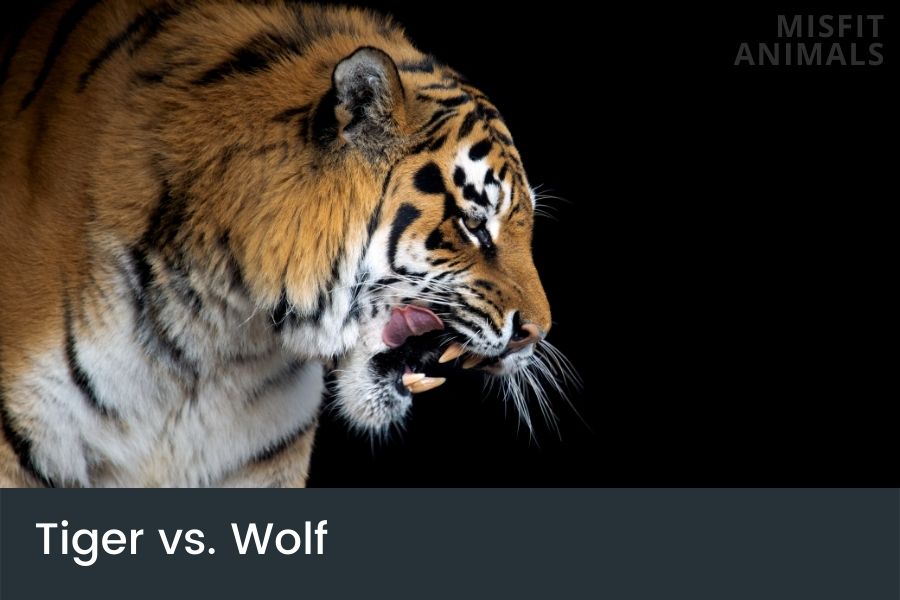 The main difference between tigers and wolves is their appearance and social structure. Tigers are much larger than wolves and can be identified by their stripes. They are solitary animals, whereas wolves live in packs.

Wolves and tigers are some of the fiercest predators in the wild, but for different reasons.

Where wolves use their pack mentality and structure to hunt down large animals, tigers make use of their sheer size and power.

There are many differences between tiger and wolf, but there are also similarities.

In this article, we’ll take a look at the differences, similarities, as well as what happens when wolves and tigers fight.

Tiger vs. Wolf Pack: Who Would Win?

If a tiger were to run into a wolf pack, the wolves would most likely end up as victors. That’s due to the strength of the wolf pack.

Wolves’ biggest strength is their ability to hunt in packs, whereas tigers are solitary animals. Hence, an entire wolf pack working together can take down a single tiger.

Tigers are much bigger and heavier than wolves and have enormous amounts of power in their muscles. Wolves, on the other hand, are extremely fast and agile which gives them an advantage in a long chase.

This does depend on the size and strength of the wolf pack.

A tiger has no problem taking down a lone wolf. Tigers are much larger animals, and can without a doubt win a fight with a single wolf.

Tigers are much bigger and heavier than wolves.

In terms of raw power, tigers come out on top.

Tigers and wolves are very different animals. They behave differently, they look different, and they come from different families. The most notable difference is their size, looks, and social behavior.

When it comes to physical appearances, tigers and wolves couldn’t be more different. Tigers are the largest of all cats, weighing in at anywhere from 200-600 pounds (the Siberian tiger is the largest tiger subspecies).

Wolves, on the other hand, typically weigh between 80 and 100 pounds, far less than the tiger.

Tigers have orange fur with black stripes running down their backs. They also have a white underbelly. Wolves can come in a variety of colors, the most common being gray, black, brown, and white.

They do have some things in common though: pointy ears, long snouts, and long tails.

Tigers are usually solitary animals,  with the exception of a mother with her cubs [1]. Wolf packs have strong social bonds and rely on each other for hunting, protection, and raising young wolves together.

Hence, wolves are much more social animals, constantly living with others of their species.

Tigers and wolves are from two different families, the tiger being a feline animal while a wolf is a canine.

Tigers belong to the family Felidae of which there are over 260 species. This family also includes lions and jaguars, amongst others.

Wolves on other hand belong to the Canidae family, where we also find foxes, dogs, and coyotes.

Tigers were once much more widespread than they are today. Due to climate change and human intervention, tigers now roam only 6% of their historic habitat. [2]

Nowadays, wild tigers are only found in Asia, while wolves live in many other countries. Tigers can also be found in Africa and northern India due to roaming.

Wolves are found in many countries and continents, including ​​the United States, Canada, Eurasia, and Africa.

Both the tiger and the wolf are carnivores, meaning that they both eat meat. They are also both from the Order Carnivora, which is a scientific classification of predatory animals. They also share some similarities in their physical features, such as their sharp teeth and powerful jaws.

Wolves and tigers are both predators. They hunt down prey to feed on. While they may supplement their diet with plants, flesh makes up the majority of their diets.

Both animals use their superior hunting skills to track down, chase, and kill animals which they will feed on.

As they’re apex predators, their only enemies are other predators.

Tigers are carnivores, meaning they primarily eat meat, same as wolves. They may also eat plant matter if food is scarce, but they prefer meat.

Wolves prefer to hunt for ungulates, which are large, hoofed animals such as elk, moose, and deer. These provide a grand meal for the entire pack.

Tigers also prefer to hunt for larger prey. This includes wild boar, deer, moose, pigs, cows, or even elephant calves. Large prey is an integral part of their diet.

Hence, the two animals prey on many of the same animals, which is why they also consider each other enemies or competitors.

Are Wolves and Tigers Related?

Wolves and tigers are descendants of different animals. Even though they’re both carnivorous predators, their evolution is completely separate from each other.

This also means that the two cannot be bred with each other. Tigers have 38 chromosomes, whereas wolves have 78. [3]

Do Tigers and Wolves Get Along?

No, wolves and tigers do not get along. They’re enemies and competitors, feeding on the same prey. There are also many records of tigers preying on wolves.

While the two animals may typically stay away from each other, they will at times engage in fights.

Related: What are wolves’ enemies?

Do Tigers Prey on Wolves?

Tigers and wolves don’t typically prey on each other, however, it does happen. The Amur tiger (Siberian tiger) is known to prey on wolves, especially when food is scarce.

While tigers and wolves rarely cross paths, it does happen. And when the two animals live in the same territory, it rarely ends well for the wolves.

Siberian tigers and wolves inhabit some of the same territories in Asia. As the Amur tiger is the biggest of all tiger species, these predators will take out other competitors.

One study shows how, whenever the tiger and wolf territories overlap, the Siberian tiger typically wins, resulting in a decreasing wolf population. [4]

Tigers will usually only prey on wolves under certain circumstances:

When any of these happen, a tiger may engage. Even though the tiger is a solitary animal, they’re also very smart when they hunt. They can single out a wolf from the pack, taking it down quickly without causing much of a stir.

Do Wolves and Tigers Ever Meet?

Wolves and tigers rarely meet in the wild, but they may do so in Asia. There are gray wolves living in Asia, the native region of the tiger. As they roam, they can cross paths.

Occasionally, there may be a skirmish as each animal fights for dominance, but generally speaking, neither animal wants to risk serious injury by fighting a strong opponent.

Wolves and tigers are very different animals but still share the same predatory instincts. Tigers are much larger than wolves, hence wolves have no chance of single-handedly taking down a tiger. The wolf pack is strong though and may be able to achieve such a thing.

While they rarely cross paths in the wild, it’s been observed that wherever wolves’ and tigers’ territories overlap, the tigers usually come out on top.