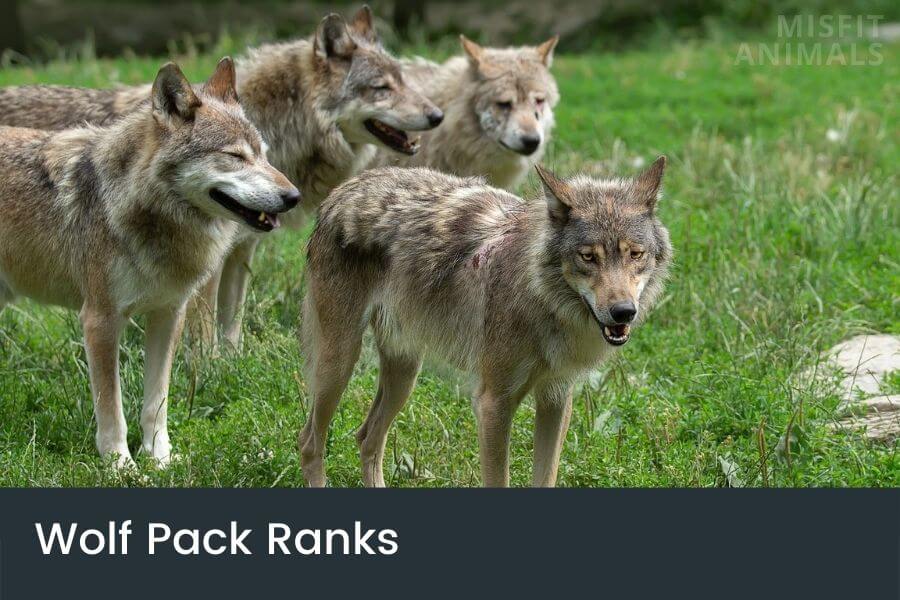 A wolf pack lives in a structured hierarchy with the following ranks: alpha, beta, mid-rank, and omega. Different ranks have different roles.

Wolves are extremely social animals. They live in wolf packs with a leader and different ranking “subordinates”. The leader is the alpha wolf.

All the wolves beneath the alpha answer to the wolf in charge.

Depending on their specific rank, they’ll have different tasks they’re in charge of.

In this article, we’ll discuss each wolf pack rank in detail, and explain how wolves behave depending on their role in the pack.

Ranks in a Wolf Pack

There are four main ranks in a wolf pack: alpha, beta, mid-rank, and omega. Each position has a specific role in the pack hierarchy.

A wolf pack consists of anywhere from 2 to 20 wolves. The average wolf pack has 6 to 8 members.

The pack consists of the following ranks:

The alpha wolf is the wolf in charge, also known as the breeding wolves. There’s typically always an alpha male and a female, which is a breeding couple of the pack.

The beta wolf is second in command to the alpha wolf; they help protect the pack and work as enforcers. When the alpha is out, the beta is in charge of keeping the pack in line.

Mid-rank wolves aren’t as strong as alphas but also not as weak as omegas. This is where the majority of wolves are found and include elders as well. These wolves will help take care of and protect, wolf pups.

The omega wolf is the lowest ranking wolf of them all, and will generally stay on the outskirts of the pack. They don’t have any authority and will be picked on by the rest of the pack.

The lower-ranked wolves will act submissively toward the higher-ranked wolves. It’s important for wolves to have a clear hierarchy, as it provides order. [1]

A wolf pack is ruled by an alpha wolf. The alpha wolf is typically the strongest of all wolves in a wolf pack, but not always. While alpha wolves are commonly used, it’s more accurate to refer to them as breeders.

An alpha’s job is to protect their family from outside threats, many times this includes hunting for food as well.

All members of the wolf pack are submissive to the alpha wolf.

A common misconception about wolves is, that they fight for dominance. This is not necessarily true, as the alpha wolf is merely the one that breeds. Hence, the accurate term for the wolf in charge is actually “breeder”.[1]

There’s typically both an alpha male and an alpha female, where the female may be referred to as a Luna wolf.

Role of the Alpha wolf

The alpha wolf is the leader of the pack and is responsible for its overall health and welfare. While they’re generally more aggressive and assertive than the rest of the pack, their most important job is breeding.

Besides breeding, the alpha also takes charge on hunting trips and generally makes sure the other wolves stay in line.

When breeding season comes around, the only couple to breed is the alpha couple.

The Alpha Pair Is the Only Ones Who Breed

While there may be more than one mating pair in a wolf pack, the only one to produce offspring will be the alphas. Hence, they’re also referred to as the breeders.

This means they are responsible for all offspring within a wolf pack.

The alpha couple will mate around January to March, where the female alpha will give birth to a litter of wolf pups.

Related: Are wolves monogamous or polygamous?

Beta wolves are the second in command of a wolf pack. They help the alpha leader keep the pack in line and carry out their orders.

Betas often have more experience than other pack members and can be older, larger, or more aggressive.

They defend the pack from danger and feed the rest of the pack when food is scarce. In some cases, betas can become alphas if the original alpha dies or is removed from power.

Their role is often seen around feeding time. The alpha male will typically eat first, then the beta, and then the rest of the pack. If any wolves try to move in before it’s their time, the beta will push them away.

Role of the Beta wolf

Beta wolves can be thought of as enforcers. They carry out the rules, making sure the other pack members keep in line.

This may be seen during feeding time, if other wolves in the pack are misbehaving, or if any wolf is harassing another.

Mid-ranking wolves are the rest of the pack. These have a somewhat fluent hierarchy amongst themselves and may try to assert dominance over each other.

The mid-ranking wolves are the lowest in the wolf’s hierarchy or wolf pack, besides the omega wolf.

This rank is made up of elderly wolves, aunts and uncles to the alpha, and even the younger wolves.

They will be submissive toward the beta and alpha wolves but have a fluent hierarchy amongst themselves. It’s not uncommon to see these wolves have small fights as they try to assert dominance within the group.

Role of the Rest of the Pack

A mid-ranking wolf is a wolf that has a flexible role in its pack. These wolves can be both hunters and soldiers, depending on what is needed by the pack at any given time.

They are the backbone of the pack and are often responsible for caring for wolf pups and teaching them how to hunt and survive in the wild.

The mid-ranking wolves may also be tasked with guarding the territory against intruders or helping to keep order within the pack. They are typically very loyal to their pack and work hard to ensure its success.

The omega wolf is the lowest-ranking member. They’re the most submissive, and don’t have any authority in the back, generally keeping on the outskirts of the pack, as well as feeding last.

Omega status is the lowest in a wolf pack hierarchy. They have no real rank and are often treated badly by other members of the pack.[3]

They’re often thought of as the scapegoats of the pack, but also the jesters. The other wolves will let their aggression out of the omega wolf, as they know it won’t fight back.

There can be both male and female omega wolves. They’re typically timider, as they’ve been raised to be submissive.

Role of the Omega

A wolf pack is the last and most subordinate role. They are often used as scapegoats and stress-relievers.

When the other wolves have internal fights, they may end up taking it out on the omega wolf.

Even though the omega is treated this way, they still instigate play with the other wolves.

A wolf pack consists of alphas (one male and one female), betas (sometimes just a single beta), mid-ranking wolves (the rest of the pack), and omega wolves (typically just one).

In wolf packs, the alpha wolf is the leader of the pack and has complete authority over all of its members. The beta wolf is second in command and may help to make decisions or enforce the alpha’s orders.

Mid-rank wolves are responsible for carrying out the duties of the pack, such as hunting and guarding territory.

Omega wolves are at the bottom of the hierarchy and have few privileges within the pack. They often serve as scapegoats for their brethren.

While there is some variation from one wolf pack to another, these are generally the four ranks found in a wolf pack. Understanding these roles can give you a better understanding of how wolves interact with each other and why they do what they do.

What Are the Ranks of a Wolf Pack?

A wolf pack consists of the following ranks: alpha, beta, mid-rank, and omega. These all have different responsibilities, and there’s often more than one wolf in each rank. Male and female alphas are known as breeders.

Do Real Wolf Packs Have Rank?

Wolf packs do have ranks, and the position of each wolf in the pack is important to its survival. The rank of a wolf in a pack determines how much authority that wolf has within the pack, as well as what responsibilities they have.

What Is a Luna Wolf in a Wolf Pack?

Luna wolf is another term for the alpha wolf. This is the breeding female, one part of the alpha couple. She’ll be the only wolf to give birth.

Who Is Responsible for Raising Young in a Wolf Pack?

The entire pack takes part in raising their young, but the female wolves in the pack typically have a bigger role when it comes to early nurturing. After giving birth, the alpha female will stay back from hunting to look after her pups, along with other females and old wolves.

Do Wolves Have Alphas?

Wolves do have alpha, but not in the sense of it being the strongest wolf. The alpha wolf is a term used in place of “breeding” males and females. The alpha’s biggest role is to reproduce.

How Many Wolves Are There in a Wolf Pack?

There are between two and ten wolves in a wolf pack, while the average size is around six wolves. This depends on the amount of young born in the latest litter, and whether any wolves recently died.

How Do Wolf Packs Work?

Wolf packs function as a family. They stay in a pack as it allows them to hunt bigger prey, and stay safe from other predators. Wolves in a wolf pack protect each other, hunt for each other, and generally take care of each other.

What Is a Group of Wolves Called?

A group of wolves is called a pack or wolf pack.