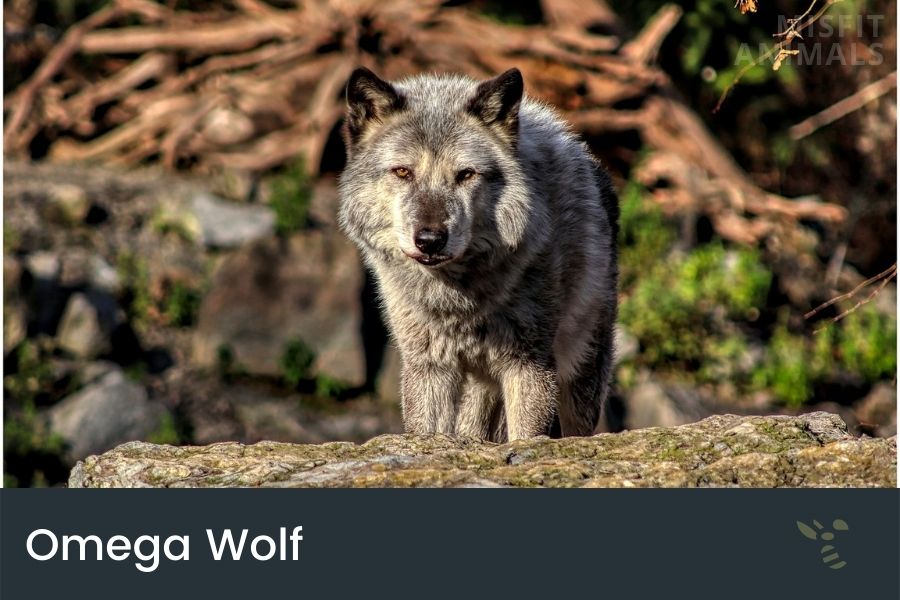 The omega wolf is the lowest rank in the pack. It’s a low-ranking individual that works as a scapegoat, jester, and stress reliever for the other wolves. An omega’s job is to eat last and keep out of the way.

The omega also wanders off sometimes, to stay out of the way or to find food outside of what is offered by its pack mates (sometimes eating carrion – dead animals).

Omegas are at the bottom of their respective packs as they do not have much power or rank.

In this article, we’ll dive deeper into the omega wolf, their behavior, and why they’re at the bottom of the ranks.

Omegas are the weakest members of a wolf pack. They are frequently less mature wolves who have not yet established their authority in the pack. Omegas will generally eat last, avoid the rest of the group, and go off on their own.

The omega is at the bottom of the hierarchy in terms of dominance and authority within a wolf pack.

The omega wolf has also been observed to work as a “stress reliever” and “jester”. The omega will often be the one to instigate play, act like a fool, or be “bullied” by the other wolves.

The behavior of the Omega Wolf

An omega wolf is often considered to be an individual who exists outside or on the fringes of the actual ‘pack’ or group. While being a member of the pack, they have no authority or dominance.

This results in the omega having to wander off, keeping away from the rest of the pack. They will often be seen with their head low and tails between their legs, showing submission to the rest of the wolves.

Related: How do wolves show submission?

Often the Younger of the Pack

The omega wolf position is often filled by an individual who is either the youngest in the pack. As the wolves grow up, they try to establish their dominance all the time, from their pups to adults.

As the youngest, smallest, and weakest or the litter, the omega has no way of establishing their authority, resulting in being picked on all the time.

This then results in the submissive behavior that omegas are known for. They know not to challenge any of the other wolves to a fight.

How many omega wolves are in a pack?

The number of omega wolves varies from pack to pack, but there will frequently be both a male omega and female omega. These will both work as the underdogs of the pack.

What’s the Rank of the Omega Wolf?

An omega wolf is the lowest-ranking member of a pack. They have no authority, and their behavior is generally very submissive.

The omega wolf eats last, keeps to themselves, and wanders off alone while the other wolves do their business during hunting trips. This behavior shows that they are truly at the bottom of the pack

However, there are several important roles that omega’s play in this social structure.

The omega wolf is the jester and stress-reliever of a pack. If any other wolves are fighting internally, the aggression and violence will usually be directed to the omega wolf.

While this sounds harsh, it’s an important aspect of a wolf pack.

What’s the Omega Wolf’s Role in the Pack?

The omega wolf serves as jesters and stress relievers for the pack, meaning, other wolves will let out any stress or aggression on the omega. At the same time, the omega is the primary instigator of play with the other wolves in the pack.

Omegas can be seen as lone wolves. They will often be alone, even though they keep trying to play with the other wolves.

Are Omega Wolves Weaker Than the Rest?

The omega isn’t as physically strong as other wolves in the pack. As said, the omega wolf will often be the younger of the litter, they’ve grown up to be smaller and weaker.

This enhances the submissive behavior, as they have no way of establishing their dominance. The rest of the wolves will be bigger and stronger, beating them in a direct fight every time.

Why Do Wolves Attack the Omega Wolf?

A frequent event within a wolf pack, is the alphas, betas, and other wolves, attacking the omega. These attacks include biting, scratching, or simply nibbling.

Omegas often have more scars, bumps, and bruises than the rest of the pack. Not from hunting or fighting other prey, but from their pack members.

The pack does this for several reasons.

This pecking order also results in the omega looking over its shoulder, being very scared and insecure. They know, that at any time, they could be attacked or hurt.

The omega wolf has a role to play in the pack. They’re the bottom feeders, the outsiders, the ones who have nothing to say. And the rest of the pack reminds them often.

This can be done in several ways, simply by occasionally giving them a hard time, or by directly fighting them.

Every wolf knows its place within the social structure of its respective pack – even though there is no physical barrier between ranks, all wolves understand who should be respected, who should be feared, and who’s a pushover.

Wolves can have internal squabbles, they can be stressed due to food shortages, or perhaps something else has happened. If they’re stressed, they have to let it out.

Here’s where to omega comes in.

If two mid-rank wolves are fighting (not physically), they usually won’t harm each other. They’ll redirect the stress and aggression towards the omega.

While this may not be “fair”, this is the way of the wolves. And the omega has the most difficult position: they have to take it, as they can’t challenge the other wolves. They’re the scapegoat, and there’s nothing they can do about it.

While the omega wolf is being pushed around, they still search for a way into the pack – and this is usually through play.

The omega is most frequently the wolf that will instigate play, inviting the other members to a pulling contest or some other form of play.

They keep being dominated and hurt by the other wolves, but they keep coming back.

Do Wolves Kill the Omega Wolf?

No, wolves do not kill omega wolves in their own pack. Even though they’re at the bottom of the pack, they’re still a member of the pack. They do serve a purpose, after all.

However, if an omega leaves its pack or is forced out of it (from getting sick for example), there are higher chances that they will be killed by other wolves.

What Makes a Wolf an Omega?

Omega wolves, also called dispersers, are the lowest on the totem pole. What makes a wolf an omega is a natural selection that happens after they’re born. They fight for dominance, and the omega is the weakest of the bunch.

An omega grows up to have certain traits.

They work as scapegoats, jesters, and stress-relievers in the pack structure. Omegas eat last and keep out of sight to be left alone. They also wander off on their own.

Their rank in the pack is evident by how they are treated.

The omega wolf has the lowest rank in the pack hierarchy.

Above the omega wolf, we find mid-ranking wolves. These are simply all of the wolves, that don’t have a specific “title”. Above them are the beta wolves, and at the top, we have the alpha wolves. [1]

Alpha female and male wolves are dominant over all members of the pack including the omega wolf.

A pack usually consists of both an alpha male, as well as an alpha female (also called a luna wolf). The alpha couple will be the ones to reproduce. [2]

Wolves can gain and lose alpha status, as they grow into or out of the role as alpha. The alpha is the leader, but at some point, alpha wolves are unfit to lead. At this point, they will be challenged by another wolf, who will overtake the position and alpha.

The alpha female wolves are often submissive to the alpha males, though the males still do respect them. As alpha males return from foraging, they will hand over what they’ve caught, or regurgitate some food, give it to the female who’ll feed it to the pups.

The beta wolf is the second-highest in the pack.

They are bigger and stronger than omega wolves, but they often lack some of their leadership skills compared to alpha wolves.

Beta wolves are often skilled hunters and they tend to be more aggressive when hunting.

When alphas aren’t present, the beta wolves will take over as leaders, making sure to keep the pack in line.

The Rest of the Pack

These can be relatives to the betas and alphas, like aunts and uncles, old wolves, or simply wolves from the recent litter who didn’t grow into a beta or alpha role.

These wolves will respond to commands from the alpha and beta wolves.

The Omega at the Bottom

The omega wolf takes the bottom place in the hierarchy. As stated, they feed last, keep out of the way, and have no authority over other wolves.

All other wolves in the pack will keep the omega in check, from mid-ranking wolves to the alpha.

Omegas are generally omega for a reason – they do not display qualities that would make them fit into more dominant roles within their pack. Omega wolves often display certain traits from their pups, such as being timid, non-aggressive, or simply not dominant.

Omegas can also be more immature, wanting to play a lot of the time.

Omegas are usually omega for life, but if they display more dominant qualities in the future, they may be able to move up the ranks.

An omega wolf can be either male or female. Omega wolves have the lowest rank in a pack, typically being seen as the scapegoat or jester. Omegas will be used for stress relief, they’ll stay out of the way, and will east last.

Omegas don’t have any authority or dominance and will be very submissive towards the rest of the pack. They’re usually younger wolves, as young wolves don’t have much strength.

The omega has two main jobs: to eat last at mealtime so that everyone else gets to feed and keep out of the way.