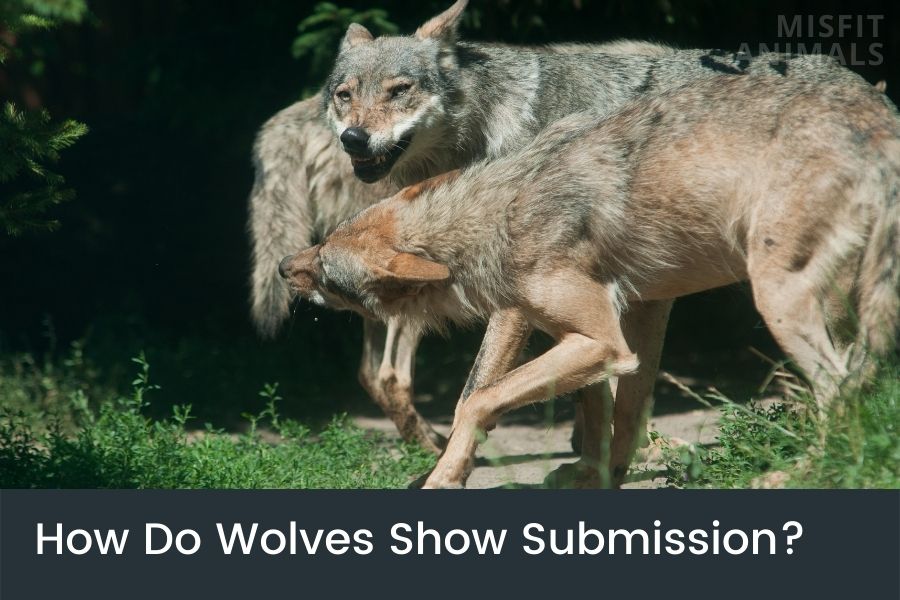 Wolves show submission through their body language, tail position, vocalizations, and their actions toward other pack members. They do so to avoid conflict, show respect, and maintain pack hierarchy.

A wolfpack is typically split in a hierarchy, where the top dog (the alpha) is the most dominant, and the bottom dog (the omega) is the most submissive.

Anything in between will act relative to their rank. This includes showing dominance to those above, or submission to those below.

In this article, we’ll go into detail about how wolves show submission, through both bodily and vocal cues.

Wolves show submission in many different ways. This is mainly done through their posture, tail positioning, and submissive vocalizations.

Depending on a wolf’s role in the pack, they’ll either be dominant or submissive. A wolf pack is structured the following way:

The omega wolf is the most submissive wolf of them all, as they’re the lowest ranking wolves in a pack. They will be picked on by all of the other wolves and will keep on the outskirts of the pack.

Wolves show submission through their posture. They will lie on their back and expose the sensitive underbelly that is vulnerable to attack.

Another way wolves show submission with their body is to stay low to the ground.

Dominant wolves do the exact opposite. They’ll stand tall, to show the rest of the pack that they’re the strongest.

To show submission, a wolf will keep its tail low, sometimes even positioning it in between its hind legs. It’ll either be completely still or have very slow movement.

This is also where the expression “with one’s tail between one’s legs” comes from. The meaning of this expression is used when someone feels ashamed or rejected.

Related: Do wolves wag their tails & why?

Vocalization is an important part of communication between wolves [1]. They howl, growl, whimper, and bark.

To show submission, wolves will whimper or whine. They do this when dominant wolves are asserting their position.

These sounds make them appear smaller as if they’re trying to become even less threatening than they already are. It’s often used in combination with posture and tail positioning.

Wolves can communicate how they are feeling through their facial expressions. The face is an important indicator of how a wolf feels in a situation.

For example, if you see your dog with his lips pulled up so he resembles what we call “smiling” this means he is happy to see you.

Wolves will lower their ears, close their mouth, lower their head, and raise their inner eyebrows. This also looks like fear.

Wolves can show submission by muzzle licking. The submissive wolf will lower its head to lick the muzzle or lips of a dominant wolf. This is also used as a greeting gesture.

This gesture can also mean other things, such as affection. It depends on the social relation between the wolves engaging in the gesture.

Related: How do wolves show affection?

Wolves often fight. This can either be because they’re arguing or in disagreement about something, but it can also just play.

The submissive and weaker wolf will give up the fight to show their submission to the other wolf they’re engaged in a fight with.

Mid-ranking wolves have a somewhat fluent hierarchy amongst themselves. They’ll often have smaller fights to determine who’s more dominant.

Why Do Wolves Show Submission?

Wolves show submission because they have a specific social hierarchy. They do so to keep the hierarchy intact, and to create order in the pack.

Most of the time, the beta or alpha wolf will keep the pack in line. These are typically the strongest wolves physically. If other wolves in the pack overstep or gets out of line, they’ll be corrected.

The beta wolf often takes on the role of enforcer. When the alpha is away from the pack, betas take on the responsibilities.

There are generally two types of submission: active and passive. Active means to do take action, while passive is defined as “accepting or allowing what happens or what others do, without active response or resistance”.

Active submission is to actively show signs of submission. Wolves will lower their body, tuck their tails in between their legs, and let out vocal cues.

In other words, active submission is when a submissive wolf is showing their submission through its actions. [2]

Passive submission is to let others show their dominance and authority without actively responding or resisting their actions.

Here’s what it looks like in the case of wolves.

When the alpha wants to assert dominance, the wolf will approach a submissive wolf, either nibbling at them, growling, or pushing them. To show passive submission, the wolf of the receiving end will do nothing.

They’ll simply take the act of dominance, allowing it to happen without resisting or responding.

The Alpha wolf, or the leader of a pack, rarely shows any signs of submission. A female alpha may show submission toward her mate, the alpha male.

They are dominant and confident in how they present themselves to their subordinates.

If another wolf challenges them for dominance by baring teeth and making direct eye contact, an all-out fight may break out.

Yes, submissive wolves do whimper. This form of vocalization can be used to show submission toward other wolves.

Whimpering can also mean other things, such as if they’re injured or frightened.

Omega wolves are at the bottom of the pack and are hence the most submissive wolves in the pack. The alpha is on the other end of the spectrum, and will only show dominance.