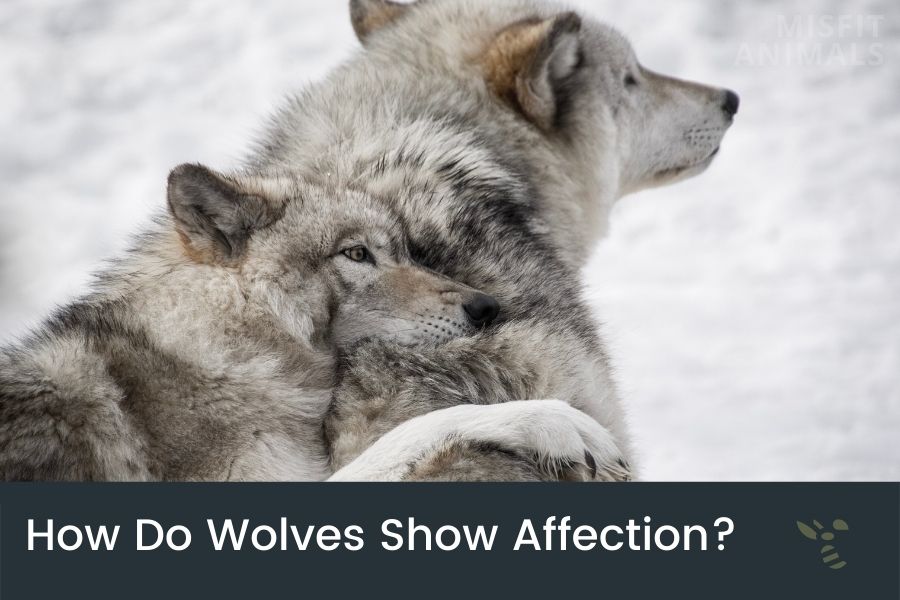 Wolves show affection in different ways, from nibbling to howling. They’ll show affection and endearment to their family members, though this is most often between mother and her pups.

Wolves are usually very social animals who live in packs with family members.

If you’ve ever watched them on Animal Planet, you might have noticed how they lick one another’s faces to greet one another.

This is called “wet-nosing” and is a form of affectionate behavior for these animals.

In this article, we’ll dive deeper into the affection between wolves.

One of the most common forms of affection seen in wolves is nibbling. They’ll nibble each other’s faces. While it may look assertive, it’s an action of endearment.

Wolves will also do a number of other things:

Most of these actions can be used to send multiple messages. A howl combined with a bark will send a much different message (an alarm) than a straight howl.

Touch & Feel Each Other

Wolves are very tactile animals. They touch each other regularly, especially during greetings, to assert dominance, or to show affection.

When wolves howl together they often stand shoulder-to-shoulder in an upright posture with their tails raised and quivering at the tip.

They also use touch to mark their territory. Wolves have scent glands on many parts of their bodies that leave markings through rubbing against trees or rocks for territorial marking.

Howling was once believed to be a vocalization triggered by stress, or as a form of alarm.

This is apparently incorrect.

A study was done on wolves, and their howling behavior shows that they how more when the missing member of the pack is someone closely related to them. Hence, they howl out of affection, or “love”. [1]

They want to signal their location, to make sure the missing wolf can find its way back home.

Social grooming is a form of communication seen in many animals, including wolves.

They lick, bite, and nip at their companion’s fur to show they care about them.

Wolves are affectionate animals who use social interactions in order to express how much they care about their pack members by grooming them often.

Wolves often touch noses together when they meet and greet, which is a sign of respect and affection between the two wolves. They will also lick each other’s faces.

Wolves can use nibbling as a sign of affection or dominance, depending on how aggressive they do so.

A gentle nib will show affection, whereas they can use a more aggressive nibbling to show who’s in charge.

Omegas will often get nibbled a lot, but not in an affectionate way. They will have bruises and bumps from other wolves using them for stress relief.

Whining, as other forms of communication, can be used for multiple things. Wolf pups will often whine to get the attention of their mother or to signal that they’re hungry.

A breeding pair may whine to show affection during play or other interactions.

Yes, wolves are affectionate animals. They share strong social bonds with one another.

How Do Wolves Show Affection to Each Other?

As discussed, wolves show affection in numerous ways, from nibbling to howling. Body language and vocal cues are important for communication among wolves.

Where humans use their words and actions to show love and affection, wolves do the same – but they use different methods, as they’re not as evolved.

It’s important to wolves to show their pack-mates affection. They need strong bonds to stay a cohesive unit. Without the pack, wolves are vulnerable.

Related: How do wolves mark their mate?

Do Wolves Bond With Humans?

Wolves can form social bonds with humans. Studies have shown that wolves in captivity will connect with their handlers, seeing them as part of the pack.

These bonds can be as strong as the ones between wolves in a pack, to the point where wolves in captivity will miss their handlers when they’re away. [2]

It’s important to note, that even though wolves can show the same traits and domestic dogs, they’re not fit for pets.

Wolves are wild animals with aggressive tendencies and do not make for house pets. They belong in the wild.

How Do Wolves Show Affection to Humans?

When wolves interact with humans, and when they’ve formed a bond with their caretaker, they’ll show affection in many of the same ways as wild wolves.

They’ll lick their handler’s face, as well as cuddle up for close physical contact. They may even howl for their caretaker when they’re away.

Wolves in captivity may also show other traits connected to domestication syndrome, such as wagging their tail or letting out small whimpers when their caretaker returns.

Wolves enjoy being petted, but they will often only allow the humans they’re comfortable around to pet them. Since they’ve been raised by their caretaker, they’ve formed a close social bond with them.

Both wolves and dogs like to lick another animal or human on the face as a sign of love and goodwill. They will also show affection by giving their caretakers food.

Another similar trait between domestic dogs and wolves in captivity is wagging their tail. This is typically not something seen often in wild wolves, but more common in captivity.

Lastly, there’s the longing for their caretaker. When a dog owner returns to their house, they’ll often be greeted by excited dogs. The same things can be seen in wolves who’ve been raised by humans.

Wolves are affectionate creatures who form close relations with their pack members, specifically their mates and pups. They’ll show affection in different ways, from howling to nibling.

Wolves raised by humans in captivity will form similar bonds to their caretakers, as well as show similar behavior towards these. They’ll seek physical contact, and show affection to their handler.