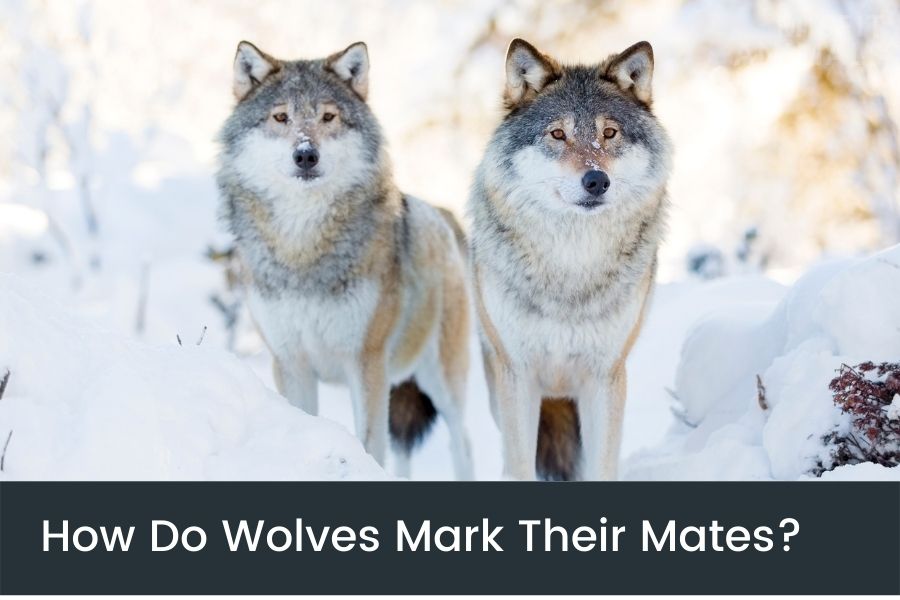 Male wolves mark their mates by smelling the genitalia of their chosen mate. The female wolf will produce sex hormones when she’s ready to breed, which the alpha wolf will smell.

Wolves choose their mates by how they smell, how they look, how old they are, and how dominant the wolf is.

When a male wolf has chosen his mate, he’ll mark them to assert his dominance over other males in the pack.

It’s usually only the alpha male which will produce offspring within the pack.

In this article, we’ll talk more about how wolves mate, how they choose their partner, and how they live their life with a mate.

What Does It Mean to Mark a Mate?

When male wolves mark their mates, they sniff their counterpart’s genitalia. They do this to show the other males in the pack, that a given female is taken.

Hence, to mark a mate is the same as “claiming” a mate. Once a female and males are mates, other male wolves won’t make a move on the female.

Wolf mates share a special bond and connection. A mating pair will often have a deeper connection with each other than with other packmates.

When other wolves see that a male wolf has marked his mate, they recognize the two wolves as mates, or partners, and will hence look toward other females for mating.

How Do Wolves Know Who Their Mate Is?

While wolves may look closely the same to humans, they can easily distinguish amongst themselves.

Most often, wolves show different behavior depending on their role in the pack. The alpha male is very assertive and dominant, while the omega wolf is very submissive.

Do Wolves Choose Their Own Mates?

Male wolves choose their mates by first examining them, sniffing them out to recognize if they’re ready for mating or not. If they are, they may proceed with courtship and breeding.

While males are always ready to mate, female wolves are only ready during specific times of the year, most often sometime between January and March.

Female wolves are most often sexually mature when they’re around two to seven years old. [1]

If the male wolf is accepted by his future mate, they’ll proceed to breed, and the female wolf will give birth to a litter of wolf pups. It’s most often only the alpha male that breeds.

Do Wolves Care About Their Mates?

There are several signs that wolves care about their mates:

How Do Wolves Show Affection to Their Mates?

Wolves show affection to their mates in several different ways. The most common ways are by sniffing each other, lip-licking, and cuddling together at night.

Most people believe that howling is just used for communication, but it can also be used as a show of affection. If a wolf is missing its mate, it can howl to communicate its location to its mate, guiding them home. [2]

Wolves also like to play and engage in mating behavior as well, which usually involves licking the other wolf on the face.

Related: How do wolves show affection?

Wolves are considered monogamous, but not all of the time. Most often, the female wolves stick to a single mate, while males may have several.

Polygamous behavior is most often seen in male alpha wolves. These are the most dominant in a wolf pack, and hence have plenty of females to pick from.

While they typically stick to a single mate, they may breed with several. This behavior is not seen in all wolves though.

One study claims that wolves are monogamous 72% of the time. This means that 28% of the time, they have more than a single breeding partner.

Related: Are wolves monogamous or polygamous?

Do Wolves Mate for Life?

Wolves usually mate for life, as they have monogamous relationships. Males will mark their mates to show ownership toward other males.

There are however a few instances where wolves do not mate for life:

Wolves tend to move on from their mates, if they’re killed, or otherwise die. They will find a new mate to produce offspring with.

Related: Do wolves mate for life?

Wolves are famous for how loyal they stay to their mates. Once a wolf has found its mate, it will stick around. The couple will be more or less inseparable.

However, this does not apply if a wolf’s mate is killed or otherwise dies. The theory that wolves won’t find a new mate is merely a myth. They will go out to find a new suitable partner.

What Happens if Wolf’s Mate Dies?

Wolves are normally monogamous, meaning that they mate with one partner for an extended period of time. If a wolf’s mating partner dies or is killed, it may grieve its loss just like how humans do.

However, once they’re done with grieving, they’ll head out to find a new mate. Depending on the time of year, they may even breed with a new mate fairly quickly after their old mate died.

The Alpha Couple is the only one that is allowed to breed in a pack. This couple consists of an alpha male and an alpha female. These wolves are the dominant males in the pack.

Especially around the breeding season, the two wolves will establish their dominance over other wolves. They will be more assertive, making sure no other mating pairs breed.

When the alpha female gives birth to wolf pups, the other females of the pack will help raise them and care for them.

In the first period after giving birth, the alpha female will stay home instead of hunting. The alpha male will then bring meat or other foods back to her and the pups.

Wolves mark their mates by sniffing their genitalia. Male wolves will first figure out if a female is sexually mature (by sniffing). He’ll then proceed to court her, and if accepted, breed with her.

Wolves are very social animals, and they’re very affectionate toward their mates. They show this affection by greeting each other after being apart. This greeting includes lip-licking and a show of submission (often done by the female).

They’re typically monogamous animals but may have several partners. This polygamous behavior is often seen in males.