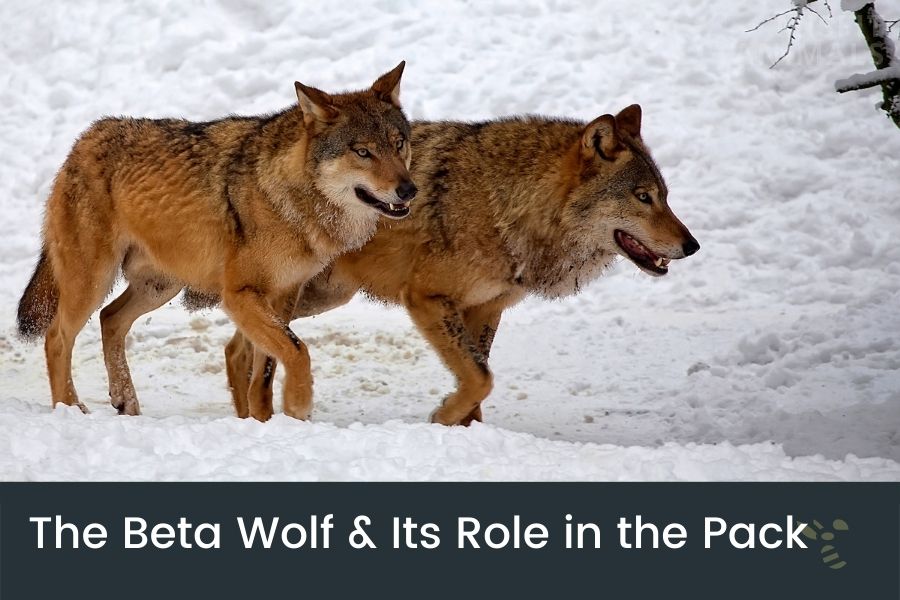 A beta wolf is the second wolf in a wolf pack hierarchy. They work as second in command. They take over when the alpha is away, and help keep the mid-ranking wolves in a line.

The beta wolf plays an important role in the pack, as it balances out the alpha wolf and the rest of the pack.

Beta wolves also play a role in maintaining peace within the group by preventing fights from breaking out between other members of the pack.

What Is a Beta Wolf?

Beta wolves are often referred to as “second-in-command”. Beta wolves are both dominant to other wolves in the pack and submissive to the alpha wolf.

Beta wolves receive less respect than alpha wolves, but they’re still a highly respected member of the pack. They play an important role in enforcing discipline and keeping order within a pack but still respond to the alpha.

There are 4 ranks in the wolf pack hierarchy:

What Does Beta Mean?

A beta wolf is typically referred to be one who takes charge if no higher-ranking member is present.

The word beta is the second letter of the Greek alphabet ( Β, β ), transliterated as ‘b’. It has many use cases in the world, such as describing a draft of a product, or something that isn’t fully developed yet.

Hence, beta is used often as something that’s not quite at the top, but rather comes just before it – exactly like the beta wolf.

The beta usually steps into their position when the alpha dies or leaves, and will then be responsible for:

Betas can be both male and female, sometimes even both.

Male beta wolves are right hands to the alpha male. When the alpha male leads the pack on hunting trips, the beta wolf will be right beside him, or directly behind him.

While female beta wolves usually aren’t as aggressive or confrontational, they still maintain their rank and social standing within the pack.

Female beta wolves also work hard at maintaining peace between all members of the pack.

Role of the Beta Wolf in the Pack

Beta wolves’ primary role within the pack is that of an enforcer and peace-maker. If other wolves misbehave, the beta will step in to discipline them.

Beta wolves have a somewhat difficult role to maintain. They need to be dominant, but not more than the alpha.

Hence, beta wolves will often remain calm and neutral, whereas the alpha will be more aggressive and dominant by nature. Only when the beta is needed, will he display his dominance.

A beta wolf is second in command of a wolf pack. This is a very important role, as it gives them dominance, authority, respect, and control – when the alpha isn’t around.

The beta wolf works with the alpha to maintain order within the group. A beta’s power is the ability to cooperate with others while maintaining their own authority.

They are often less physically imposing than most alphas because they don’t need that physicality to get ahead, instead preferring social intelligence over brute force.

Beta wolves use their rank to discipline lower-ranking wolves in the pack when they misbehave.

Taking Over When the Alpha Is Out

The beta wolf will step up to lead if there isn’t an alpha around.

Beta wolves will often have to step up when the alpha is away, killed, or injured. Hence, the beta needs the respect of the colony, without overruling the alpha.

If the alpha wolf is killed, the beta wolf may become the new permanent leader of the pack. If the pack doesn’t recognize the beta as a new alpha, the pack will split up.

Beta wolves are somewhat responsible for hunting, together with the alpha wolf. They’ll let the alpha control the pack and call the shots, but won’t be far behind.

The beta wolf hunting behavior depends on corresponding external factors, and is made out of 5 stages:

Depending on whether they can see the alpha or the prey, they switch between states.

The behavior of Beta Wolves

Beta wolves live a somewhat stable existence. They know their role, and so do the other wolves. Yet, it’s a difficult role to balance.

They’re both submissive and dominant, respectively to the alpha and to the rest of the pack.

They’ll both let the alpha dominate, but at the same time show authority themselves.

Submissive to the Alpha wolf

All wolves in a wolf pack are submissive to the male alpha, even the female alpha. If the alpha isn’t respected, there will be consequences. This also applies to the beta wolf.

Hence, in regards to the alpha, they’re as submissive as the rest of the pack, though they’re still high up in the hierarchy.

Dominant to the Rest of the Pack

The beta wolf is dominant over all other wolves in the pack. They are very territorial and will do anything necessary to protect their rank within the group.

There is usually one or two beta members per family unit, one male, one female, or both.

The beta wolf works, as stated previously, as an enforcer and peace-maker. They’ll make sure the other wolves behave accordingly to their rank, and that they don’t overstep their boundaries.

This may include pushing, nibbling, and “attacking” (without intending to kill), lower-ranking wolves.

An example of this is feeding time. When the beta wolf eats, and other members of the pack try to feed as well, the beta wolf will push them away, making them wait for their turn.

Wolves generally have 4 ranks in their pack: Alpha, Beta, Mid-rank, and Omega.

The alpha wolf is the primary leader of a pack. They direct and control their subordinates, marking boundaries with scent marks, and imposing rules on how members should behave within their territory.

An alpha wolf is in charge of his or her own individual pack. Generally speaking, an Alpha male will always be dominant over female alphas but not necessarily vice versa.

The alpha wolves, male and female, will be the breeding pair of the pack. This means, no other pair is allowed to breed. The rest of the wolves will help care for the pups.

The beta wolf is the second-highest rank in the wolf pack hierarchy. There can be both a male and a female beta wolf, as they usually have separate hierarchies.

The beta wolves play an important role in the pack, though they are not as high-ranking as alphas.

The beta wolf enforces the rules set by the alpha, making sure the other wolves don’t overstep.

Mid-Ranking wolves are always wary of the beta wolf and alpha wolf, trying to stay out of their way.

The mid-ranking wolves tend to be the ones that cause problems within wolf packs; acting as if they don’t know their place in a pack can lead to punishment by beta or alpha wolves.

These are often uncles, aunts, or elder wolves. A wolf pack is often made out of family members. Mid-ranking wolves may also be old betas or alphas, who’ve become too old to take on the authoritative roles.

The omega wolf falls at the bottom of a pack’s social hierarchy and is usually targeted for harassment. They work as stress-relievers for the rest of the pack, resulting in the omega having bruises most of the time.

Omega wolves are usually shyer, or timider than the rest. They keep their distance from the pack most of the time, but may also instigate play.

The beta wolf holds the second-highest rank in the pack, right under the alpha wolf. This makes them second in command and often results in a peace-maker or enforcer role.

They eat second, they are second in line when hunting, and will step up if the alpha is away, injured, or killed.

The beta wolf is submissive to the alpha but dominant to the rest of the pack. They will let the alpha wolf keep control until they’re needed.

What Comes After Beta in a Wolf Pack?

The alpha is the top-ranking wolf in the wolf pack hierarchy, while the beta is second in command. After the beta comes to the rest of the pack, called mid-ranking wolves. These are other relatives, such as aunts, uncles, elders, or pups.

The mid-ranking wolves have a flowing hierarchy amongst themselves, which can make their roles confusing at times, often resulting in fights.

What Is the Role of a Beta Wolf?

The beta wolf holds the role of second in command, enforcer, and even peace-maker. If other wolves misbehave, they’ll step in to keep them in line. They may punish, or discipline, other members of the pack.

A beta wolf’s job in the group dynamic is to ensure no one individual becomes too dominant over others and maintains balance among all members of the pack. Betas are often mature wolves who have earned respect from their peers through experience.