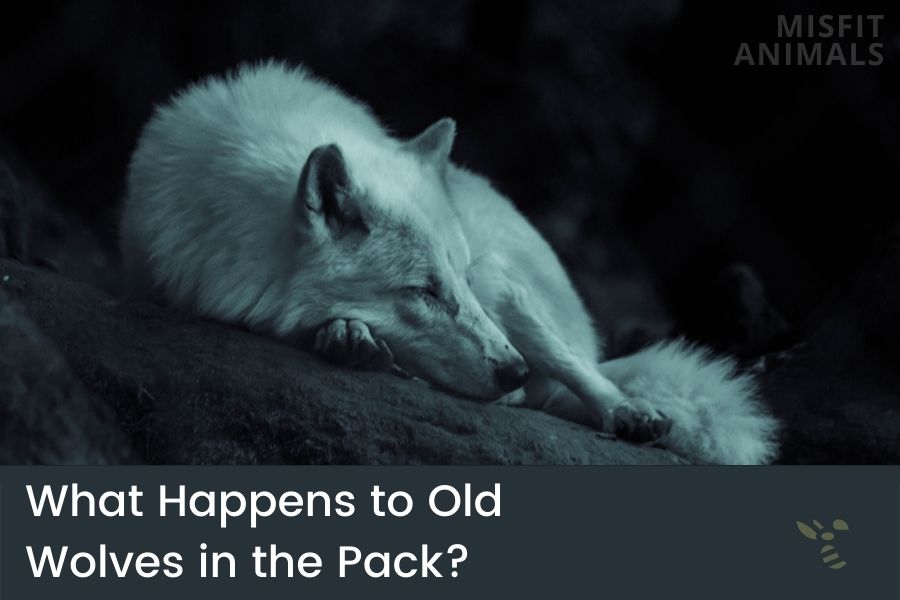 Old wolves in the pack are still important members. They aren’t killed or banished, but they’re typically not alphas or betas either. They’ll help share their wisdom as mid-ranking wolves.

Some people believe old wolves are abandoned, or killed, but this is not true. Wolf packs are like families – and they don’t kill their families.

But as wolves grow older, they lose their strength.

So what exactly do they do? That’s what we’ll discuss in this article

What Happens to Old Wolves in the Pack?

While the pack is led by the alpha, the old wolves still have plenty of wisdom to share.

They’ll show the rest of the pack their hunting strategies, and other neat tricks they’ve picked up on over the years.

Just because they aren’t as strong as they used to be, they’re still very important to the pack, as well as the structure of the pack.

Sometimes, an old wolf will remain the alpha, if they’re respected by the pack members. In this case, they’ll let the younger wolves lead on hunting trips, yet still, be in charge of decision making.

What Happens to Old Females Wolves?

Some of the same things that happen to old males. In fact, this is what usually happens. The old female won’t go hunting, or will at least stay in the back of the pack.

Old females tend to withdraw from any activity involving fighting with other wolves over food sources, territory, etc.

For old alpha females (also called Luna wolves), they’ll usually be replaced when the alpha male is. When they’ve pushed down the ladder, they’ll stop breeding, as only the alpha couple is allowed to do so.

The old alpha female has now shifted from being the breeder to becoming a caretaker.

Old female wolves are very wise. They know a lot and can see what younger ones cannot; what kind of trouble may be lurking, or the consequences of a misplanned attack.

Old alpha wolves can become betas when they are beaten in a fight. Wolves decide who’s alpha based on authority and strength.

If the beta wolf decides to challenge the alpha and wins, they may swap places in the hierarchy.

What Are Old Wolves Rank in the Pack?

Old wolves’ are usually what’s called “mid-ranking”, meaning, they’re in the middle of the pack in terms of importance.

The mid-ranking wolves can be anything from young wolves or old wolves to aunts and uncles of the alpha.

As old wolves, they may just have a little more authority than the rest of the mid-ranking wolves. They’ve gone through a long life, and hold a lot of experience.

When a new wolf is born into an old pack, it’s rank in the hierarchy is determined by how other members of the pack interact with it, as well as its own personality traits. Shy or timid wolves tend to rank lower than aggressive and authoritative ones.

Where Do Old Wolves Stand in the Pack?

Old wolves will stand towards the back of the pack. They don’t want to get in the way of the young and strong wolves, who’ll be leading, but they also want to protect the young pups, who’ll be staying far back.

The old wolves aren’t leaders on hunting trips anymore, but instead teachers, who’ll teach the younger wolves how to do things correctly.

What Happens When Old Wolves Dies?

If an old wolf dies as an alpha, the pack will get a new alpha. This will either be the oldest son of the deceased alpha or the strongest member of the pack (which will usually be the beta).

It does happen that the pack won’t be able to find a new leader.

When this happens, they can either:

If the wolf was the only breeder, then there’s a 77% chance of the pack dissolving. [1]

Wolves will not kill old wolves in the pack. They are still an important part of what makes a group cohesive and strong, even if they cannot run as far or fight as well as they used to. [2]

Elder wolves withdraw as they get older so younger alphas can lead the pack without them getting in the way, but still keep watch. They never leave completely though. It is still their duty to protect the pack, even if a new wolf takes control.

If two wolf packs encounter each other, they may kill the old wolves of the other packs, not they’ll never kill their elders.

What Are Old Wolves Called?

There’s no exact term for an old wolf. Elder wolves are called elders or oldsters. These terms can also be used for humans, and are simply other words for “old”.

Some old wolves do have certain roles in the pack, such as alpha or beta. In this case, you could put their role in there, such as “elder alpha wolf”.

How Old Do Wolves Get? (Life Span)

Wolves live for about 14 years if they’re in the wild while living around 16 years in captivity.

The reason behind the difference in life span between free wolves and wolves in captivity is the care they receive.

Animals who live in cages, or in sanctuaries, typically receive better care, than they would in the wild. They get to eat every day, and they have access to plenty of water.

Related: How long do wolves live?

Old wolves are still important to pack members, but they’re often demoted from alpha or beta roles. The elderly wolves won’t be as strong as younger, capable wolves, and such won’t be able to lead hunting trips.

They will typically stay towards the back of the pack, looking out for the wolf pups. Instead of leading hunting trips, they provide value to the pack by sharing hunting strategies, that they’ve learned over the years.