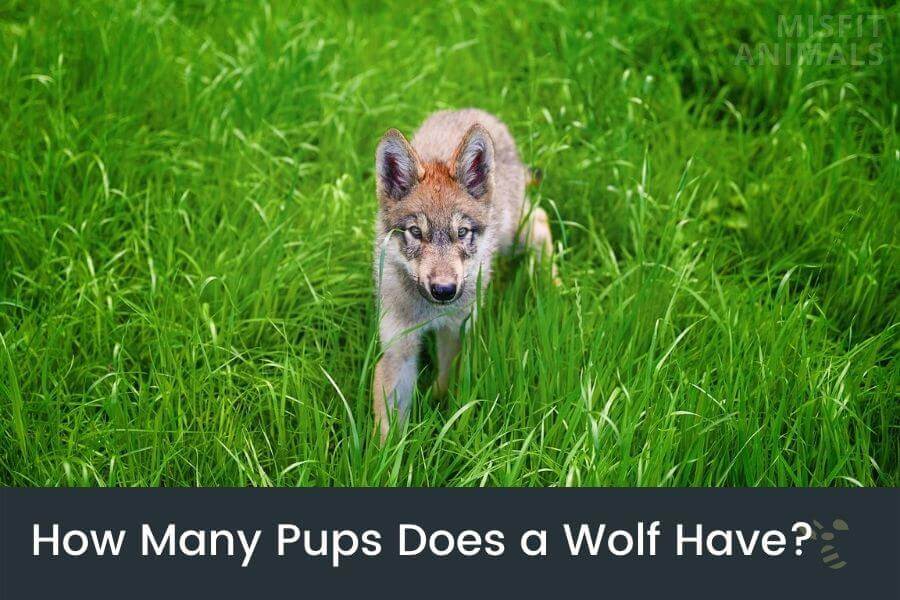 Female wolves give birth to anywhere between 1 and 15 pups, with the average being 4 to 6 pups.

Wolves breed to increase the wolf pack and to survive for generations through expansion.

The wolf pups are cared for by the entire pack, not just their parents.

The litter size of a wolf litter varies from year to year, but they only give birth to one litter a year.

How Many Pups Does a Wolf Have?

When wolves give birth, they’ll typically give birth to a litter of 4 to 6 wolf pups, though this can vary between 1 and 15.

A mature female wolf will come into estrus once a year. Hence, wolves mate once a year between January to March. This is only done by the breeding pair of the pack.

The breeding female, also known as the Luna wolf or Alpha female, will then give birth in the early springtime.

After mating, they then have a gestation period of 63 days. Hereafter the female will give birth to anywhere between 1 and 15 wolf pups.

Pups are born blind and deaf, making them vulnerable in their early life stages.

How Many Pups Does a Wolf Have In a Year?

Wolves will only mate once per year and the average litter size is between four to six pups, though it can range from one to fifteen.

Hence, wolves can both give birth to just one or up to fifteen pups every year.

Unfortunately, wolf pups have a high mortality rate. Many wolf pups don’t make it past their first few weeks.

How Many Pups Do Wolves Have In a Lifetime?

It takes about 12 months for a wolf to fully grow. Around the 2 year mark is when they become sexually mature and may leave the pack.

Wolves are sexually mature from the age of two years old, and most wolves live to be 8 in the wild.

Hence, wolves mate once per year for about six years. With a little math, we can calculate that wolves will have between 24 and 36 pups in their life.

However, if they were to live longer (as wolves can live up to 16 years), they could reach upward of 10 years.

How Many Pups Survive in a Litter?

Pups are born blind and deaf which means they must rely on their mother for survival. Unfortunately, only about 40% to 60% of wolf pups survive into adulthood.

This high mortality rate is due to a number of reasons:

The mortality rate for wolf pups is, as stated, high. This number can be due in part to predation by other animals within the pack’s territory or diseases that may sweep through the pack.

Sometimes, wolves even steal pups from other wolves, if many in their own litter died.

Pups are born blind, but they’re not deaf. They rely on hearing and feeling the first 10 days of their life.

Pups rely on their mother at first, mostly because they can’t see, and can’t take care of themselves.

When wolf pups are born, their eyes are closed. These won’t open until around 10 days after birth. At first, they rely on feeling, hearing, and smell.

As they grow bigger, they slowly develop teeth, their fur will grow out, and their eyes will change color from blue to yellow or brown.

How Often Do Wolves Mate?

Wolves will mate once a year when the female goes into estrus. This happens between January and March.

Female wolves are sexually mature when they are about 2 years old. Around January to March, they’ll go into estrus, where they’ll be ready to breed.

When this happens, they’ll release sex pheromones, which the male wolves can smell. This is how the male knows it’s time to mate.

They’ll only mate once a year, and will hence give birth to 4 to 6 pups a year (on average).

Related: Do wolves mate for life?

Which Wolves Breed in the Pack?

It’s typically only the alpha male and female that’ll bread. This couple is known as the breeding pair.

Wolves are very social animals. They typically live in packs with family members related by blood, but they will form close relationships with non-family wolves as well.

There is usually an alpha male and an alpha female who lead the pack along with their offspring pups.

This alpha male and alpha female are the only wolves that’ll breed unless prey animals are abundant around. Under certain circumstances, the alpha pair will allow another pair to mate as well.

The alpha male and female are typically more assertive and aggressive during the breeding season, to ensure no other wolves breed.

Other wolves in the pack will help take care of the younglings.

What Are Baby Wolves Called?

Wolf babies, or pups, are typically born in the springtime. Depending on the region, they can be born as early as January and as late as April. Litters can range anywhere from 1 to 15 pups, but 4 to 6 is about average.

The gestation period for a wolf is 63 days.

How Quickly do Pups Grow?

It takes about 12 months for a wolf to fully grow. Around the 2 year mark is when they become sexually mature and may leave the pack.

The growth rate of wolf pups is highly variable, with some growing rapidly and others lagging behind.

On average, wolf pups grow about one pound per week during their first five months [3]. They reach adult size by their first birthday.

There is considerable variability in how quickly pups grow – some may reach adult size as early as 9 months while others take up to 13 months.

Wolves will give birth to a litter of pups averaging between 4 to 6 wolves, though they can range between 1 to 15 pups. They mate once a year, between January and March, and will give birth in early to late springtime.

It’s only the alpha pair or breeding pair, that’ll give birth. The rest of the wolf pack will help protect and raise the newly born pups.