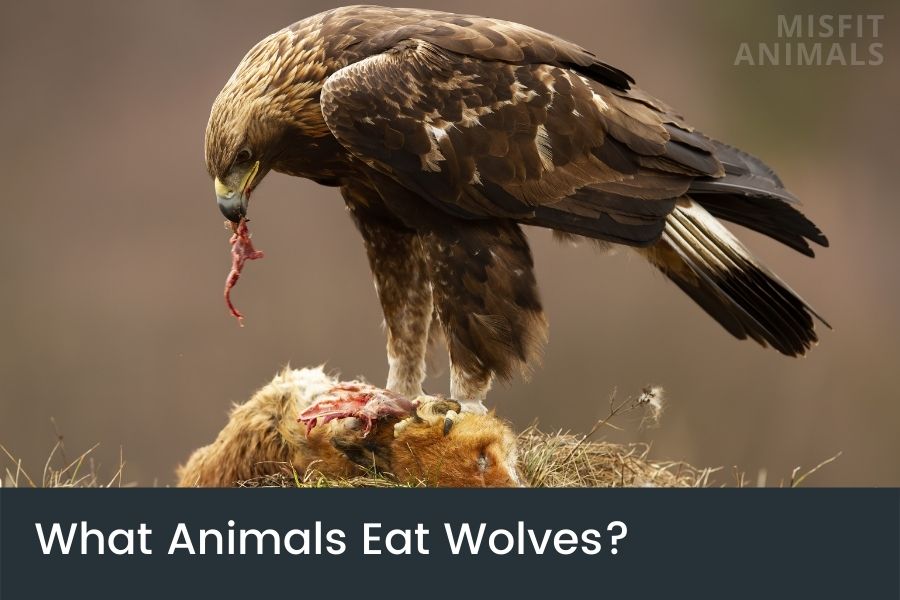 Wolves are apex predators; they’re at the top of what’s called the food chain. However, this doesn’t mean they aren’t preyed upon by other animals.

The wilderness is full of predators, from bears to lions. Some of these animals are too difficult for wolves to take down, but it does depend on the circumstances.

In this article, we’ll talk about what animals eat wolves, and when they do so.

What Eats a Wolf?

Bears are one of the animals that prey on wolves. While 70% of bears’ diet consists of plants and vegetation, they’re known to prey on animals such as ungulates, smaller mammals, and the occasional wolf.

While bears don’t typically hunt and eat wolves, they may be inclined to do so under certain circumstances:

If one of these happens, bears will kill wolves.

While bears have no problem taking down a single wolf, killing an entire pack may be a problem. The outcome of such a fight depends on several factors, such as how many wolves are in the pack, if they’re weak or strong, and more.

Siberian Tigers are the largest predators in the cat family. They can weigh about 475 pounds (215 kg) and can measure over nine feet long from head to tail. Their coat is mainly a reddish-orange, with black stripes that run down their back and legs.

These tigers primarily eat deer, but they will also take down elk, wild boar, and even small bears.

Siberian tigers have been known to kill wolves, though it’s not common. Studies show that wherever tigers live, wolf populations tend to go down due to the hunting efforts of the tiger.

Mountain lions are one of the predators that can kill a wolf, though the two rarely meet. However, wolves can also kill mountain lions.

One study shows, that when territories of wolves, bears, and mountain lions overlap, the lions are typically the ones to fall short. [1]

They live in North America and hunt deer, elk, and other large prey. A mountain lion will usually try to take down an animal by leaping onto its back and biting its neck. Their sharp claws can also injure their prey.

The coyote often shares the same habitats as wolves, as may at times also kill and hunt wolves, however, this happens very rarely.

Coyotes are opportunistic hunters and will take advantage of any prey they can find. They’re also territorial animals and often compete with other predators for food sources.

While the average coyote is much smaller than the average wolf, they’re known to prey on wolf pups. They may also take down weakened or injured wolves.

The two animals have a complex relationship; while coyotes will eat wolf pups whenever they can, adult wolves will sometimes kill coyotes in order to protect their territory.

In general, however, the two species usually avoid each other.

Wolves are also preyed on by other scavengers. These scavengers include bears, vultures, coyotes, and eagles.

While scavengers won’t engage with a healthy wolf, they may prey upon the weak and injured ones. Vultures, for one, are known to circle prey that’s just about to die, as they want to secure their meal.

Scavengers and wolves are not just enemies. Scavengers actually benefit by living around wolves, as wolves often leave meat behind. This way, animals such as foxes, ravens, or other scavengers have access to easy meals. [2]

Wolves typically try to avoid other wolf packs. At times, wolves from different packs do cross paths. When this happens, they can engage in a series of different interactions, either neutral, positive, or negative.

Wolves are usually not cannibals, yet it has been observed that wolves eat other wolves. This usually happens if they’re starving, and there’s no other food around.

When wolves cross paths, they’ll interact. This can either be:

Humans are one of the top predators of wolves, and wolves know this. Humans are known to kill wolves for sport, food, and fur.

Wolves have been hunted by man for centuries, and they continue to be killed in large numbers today, even though it’s illegal in many countries. [3]

Do Wolves Have Enemies?

Wolves sit atop the food chain, however they do have enemies.

Wolves natural enemies are the ones mentioned in this article:

Wolves’ position at the top of the food chain means that they play an important role in maintaining ecosystem balance. By preying on weak and sick animals, wolves help keep populations of ungulates (hoofed mammals) healthy and check. [4]

When left unchecked, overpopulation can have a negative impact on the environment, including overgrazing.

Related: What are wolves’ enemies?

What Kills Wolves in the Wild?

Wolves can be killed by other predators, including coyotes, bears. They’re also killed by diseases, accidents, or even by the prey they hunt, such as elk or bison

However, many of these animals don’t always engage in aggressive interactions, as they’re aware of the risks.

Diseases are a common cause of death for wolves. Especially wolf pups die due to sickness.

They can contract diseases from both animals and humans. Rabies is perhaps the most well-known disease that affects wolves, but there are many others that can kill them as well.

Accidents also claim the lives of many wolves. Wolves are not the most careful animals, so they can easily get hurt or even killed in accidents. They’re often hurt when hunting, but fatality is less frequent.

Where Are Wolves in the Food Chain?

Wolves are apex predators, meaning they sit on top of the food chain and have no natural enemies besides other predators.

As wolves are apex predators, they prey on other animals, typically herbivores. They primarily eat large ungulates (hooved animals), such as deer, elk, and moose.

However, they will also eat smaller prey if it is available.

Although wolves are not typically killed by other predators, they can still be vulnerable to attack. For example, cougars and bears may kill adult wolves, while coyotes and foxes often prey on wolf pups.

In rare cases, humans also hunt wolves for their fur.

By understanding the role of wolves in the food chain, we can better protect these iconic animals and the ecosystems they inhabit.

The biggest advantage that wolves have over other predators is their pack mentality and structure. A group of wolves can take down prey much larger than they could individually.

Wolves are social animals that live in packs. The size of a wolf pack ranges from 2 to 20 animals, but the average size is 6 to 8 members. This pack works together to bring down large prey by attacking it from different angles.

When alone, wolves are not as strong though.

It’s typically when a lone wolf is hunting, that they’re killed by other predators. Most people tend to think of wolves as much bigger and stronger than they actually are.

There are several animals that prey on wolves, such as bears, tigers, lions, coyotes, other scavengers, humans, and even wolves themselves.

While wolves are at the top of the food chain, they can still be killed by other predators, though this isn’t as common as you might think.

Wolves live in the wild and are killed by many different things, not just other predators. It has even been observed that weaker wolves have a diet while hunting and the large prey they target can be very dangerous.