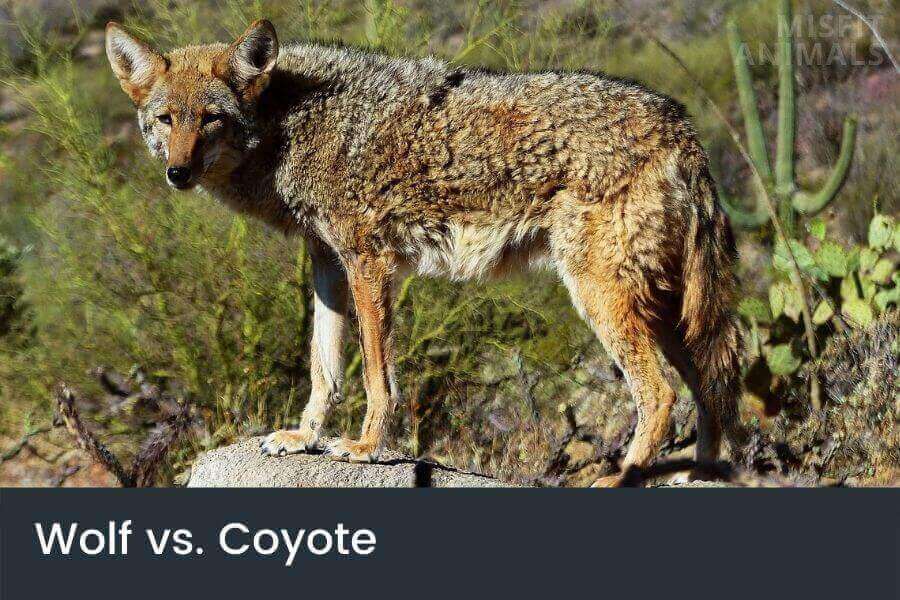 The main difference between wolves and coyotes are size and social behavior. Wolves are generally larger than coyotes, and will occasionally prey on them. The two animals are both predators, and see each other as competition or enemies.

Wolves and coyotes are both wolf-like, but there are a lot of differences between the two.

Wolves live in packs and hunt together while coyotes live in pairs or alone and hunt either alone or with another individual.

There are also some physical differences and similarities, where wolves are typically larger, while they share the same body structure.

In this article, we’ll discuss the differences and similarities between wolves and coyotes, and take a look at how fights among them play out in the wild.

Comparison of Wolves and Coyotes

Wolves and coyotes are related, as they’re both parts of the Canis genus. Hence, it’s only natural that they share some physical and behavioral traits.

Wolves and coyotes are both different and alike. Physically, wolves are typically larger than coyotes. They have broader heads and longer muzzles, while coyotes have narrower heads and shorter muzzles.

Coyotes also tend to be lighter in color than wolves, though they both have gray, black, or brown fur.

Vocally, wolves make much deeper howls than coyotes do. Coyote vocalizations include yips, barks, and whines.

Hunting behavior is another major difference between these animals. Wolves typically hunt in packs, while coyotes usually hunt alone or in pairs.

There are major differences between coyotes and wolves. The biggest differences are found in their physicality, vocalization, hunting behavior, and diet.

Coyotes are generally smaller than wolves, averaging between 15 and 45 pounds in weight. Wolves, on the other hand, typically weigh between 80 to 100 pounds but can get as big as 175 pounds.

Wolves are also taller than coyotes, but not by much. As coyotes are more slender animals, it makes sense why they weigh much less.

The physical appearance of the coyote is very similar to that of the wolf. Both animals have long fur coats to protect them from cold temperatures, they have long tails, a long muzzle, and sharp teeth.

One of the most noticeable distinctions between wolves and coyotes is their vocalizations. Both howl, bark, and growl, but coyotes are higher pitched than wolves’ typical low-pitched vocals.

Coyotes make a wide range of vocalizations including yips, barks, howls, and whines. These are often used as a warning, or to otherwise communicate.

Wolves often use their distinctive call to communicate with one another, whether it be as a warning or as a means of locating other wolves in the area. [1]

Wolves and coyotes are both hunters, but there are fundamental differences in their approach: solitary hunting or social hunting.

Coyotes typically hunt either alone or in pairs [2], while wolves usually hunt with their pack, especially if they hunt for larger prey. [3]

Wolves also tend to focus more on prey larger than themselves such as elks or moose. While coyotes will still attack large animals like these, it is rarer because they prefer smaller animals, such as rabbits.

Hunting is when animals go out and kill animals for food, while scavenging is the act of eating already dead animals. Where wolves typically show predatory behavior, coyotes are more inclined to scavenge.

This does not mean that coyotes don’t procure meals through predation. They merely scavenge more than wolves do. [4]

Both From the Same Family

The wolf and the coyote share many similarities. They are both there in the family Canidae and even share the same genus of Canis. [5]

Wolves and coyotes are so alike that they can breed, producing hybrids known as “coywolves”.

Although they’re different species, wolves and coyotes share about 96% of their DNA.

The DNA of coyotes was studied by a researcher named Monzón. He found out that coyotes are a mix of wolf, coyote, and dog admixture (mix of DNA). 64% of the eastern coyote’s genome is coyote (Canis latrans), 13% gray wolf (Canis lupus), 13% Eastern wolf (Canis lycaon), and 10% dog (Canis familiaris). [6]

Coyotes and wolves are both carnivores, which means they primarily eat meat.

Coyotes mostly eat small mammals such as rabbits, whereas wolves prefer to eat ungulates, such as elk and moose. Wolves will also prey on smaller mammals though, making the two animals competitors.

Coyotes have less endurance than wolves, though they still have very great stamina. Both animals can run for a very long time, and they use this stamina when hunting or traveling.

Can a Wolf Kill a Coyote?

Wolves can, and do occasionally, kill and eat coyotes. While it’s not common, wolves will hunt coyotes if they’re starving, or if there’s no other food around.

As coyotes are smaller than wolves, they don’t stand much of a chance, if the two animals find themselves in a fight. Wolves have been reported to kill coyotes in fights over food or prey.

Wolves will also engage if coyotes are preying on wolf pups.

Can a Coyote Kill a Wolf?

Yes, coyotes can kill wolves, but it’s not common.

Coyotes may be smaller and weaker than wolves, but they are incredibly adaptable.

If coyotes kill wolves, it’s most often under circumstances where the wolf is alone, as well as weakened beforehand.

Related: What animals prey on wolves?

Which Is More Dangerous, a Coyote or a Wolf?

Wolves and coyotes tend to stay away from humans and hence pose minimal risks to people. However, in a general sense, wolves are more dangerous.

As stated, wolves are bigger. They’re better killers, and they hunt in packs. Hence, they can take down much larger prey than themselves.

This all makes them much more dangerous to other animals than coyotes.

Can Coyotes and Wolves Mate?

For crossbreeding, or hybridization, to be possible, the animals need to be somewhat related. They also need to share the same number of chromosomes, otherwise, offspring is impossible.

Coyotes and wolves are indeed very closely related, and they both have 78 chromosomes (39 pairs).

These hybrids tend to be more social and less aggressive toward each other, compared to pure coyotes.

Do Wolves and Coyotes Get Along?

Wolves and coyotes do not get along. If coyotes invade wolves’ territory, they will be chased away.

Coyotes are cunning animals, sometimes following wolves to steal their food. They also occasionally prey on wolf pups. When they’re caught by the wolves, they’ll be chased away.

This happens because the two animals are natural enemies. They’re competitors, competing for food and territory. And the wolf typically wins.

Yes, wolves will eat coyotes if the opportunity arises. While wolves prefer to eat ungulates, which provide more food for the pack, they may prey on coyotes if nothing else is available.

The wolf and coyote share many similarities, but also some key differences. Wolves are generally larger than coyotes, and they hunt in packs. Coyotes, on the other hand, hunt alone or in pairs.

Both animals vocalize to communicate with one another, and their diets consist mostly of meat. However, wolves typically prey on large game such as deer, while coyotes will eat anything from insects to small mammals.

Do Wolves and Coyotes Ever Meet?

Yes, wolves and coyotes sometimes meet. Coyotes are however more likely to be found in open areas like prairies or agricultural land, while wolves prefer forested areas.

Coyote attacks on wolves are extremely rare, but there have been cases where they’ve successfully hunted wolves. They typically do so if the wolf is weak and alone.

What Is the Difference Between a Wolf and a Coyote?

Wolves are larger than coyotes, and they live and hunt in packs. Coyotes also live in packs, but they hunt alone or in pairs. Their vocalizations are also different, as coyotes let out higher-pitched barks, yelps, growls, and howls.