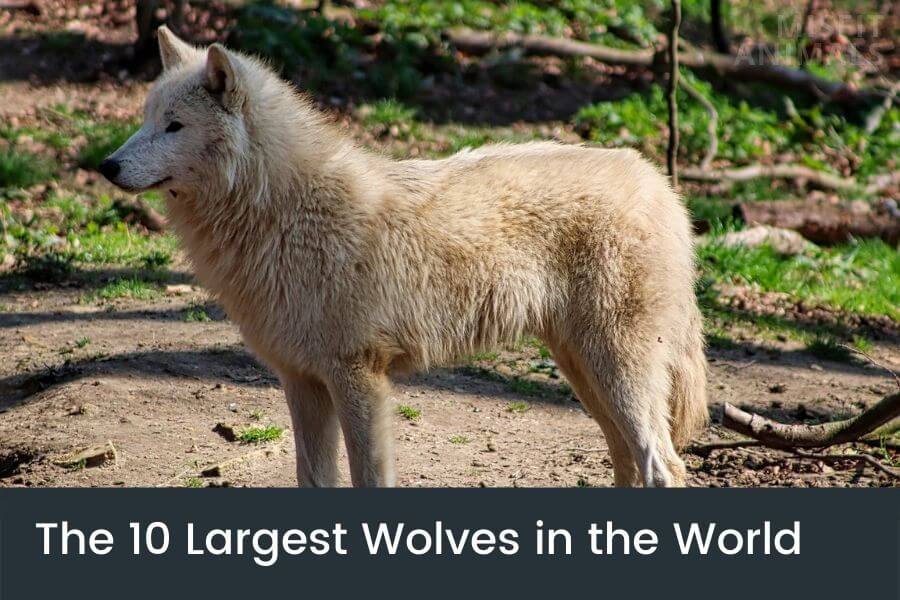 The biggest wolves in the world are members of the Northwestern wolf species, also known as the Mackenzie Valley wolf (Canis lupus occidentalis).

There are many different species of wolves, big and small. Wolves are widespread, living in both America, Europe, Asia, and Africa.

In this article, we’ve listed the 10 largest wolf species in the world:

They are found mostly in Canada and Alaska throughout forested regions, but will at times also roam into the Northern United States.

These wolves have a creamy white facial mask with black markings on their backside which makes them easy to distinguish from other wolves when spotted by humans.

A study done on the weight of these wolves in 1996 shows that the average weight for an adult male is 105-135 lbs while females weigh about 85-100 lbs on average.

Another contestant to the biggest wolf is the Alaskan grey wolf. They can grow to be as big as 130 lbs (32 kg) and measure around 33.5 inches (85 cm) from paws to shoulders.

Interior Alaskan wolves are a subspecies of the Canis lupus. They look like your average gray wolf, with a gray fur coat.

One report of an Interior Alaskan wolf mentions a wolf weighing 202 lbs (96 kg), though large wolves are known to hold up to 20 lbs of meat in their stomach.

This wolf is native to Alaska, the United States, and Canada, with habitats ranging from forests, alpine, subalpine, and Arctic tundra.

The Eurasian Wolf (Canis lupus lupus) is found outside of North America, in northern regions of Europe and Asia. The biggest wolves of these species can reach up to 190 lbs.

The Eurasian Wolf is an opportunistic hunter that feeds primarily on ungulates such as deer, wild boar, and elk, but will also eat smaller prey like rabbits and rodents. [1]

They are known to scavenge when possible and have even been observed hunting in packs of up to 12 individuals.

The Northern Rocky Mountain Wolf (Canis lupus irremotus) is one of the biggest wolf species in the world. They are native to the Rocky Mountains, hence their name.

They have gray fur with black tips on their ears, muzzle, and legs. The Northern Rocky Mountain Wolf typically lives in packs of six to eight animals, but can sometimes be found living alone or in pairs.

In 1978 they were classified as an endangered species, but this classification was removed in 2000 due to the Northern Rocky Mountain Wolf Recovery Plan. [2]

They prey mainly on elk and deer, but will also eat smaller mammals such as rabbits and rodents.

In contrast to other wolf species, the NRMW is not considered to be a particularly aggressive animal; they usually only attack humans if they are threatened or provoked.

The Arctic Wolf is one of the most well-known and easily identifiable subspecies of wolves in the world due to their almost all-white coat color. They are native to the Arctic tundra of Canada.

While it’s still a big wolf, it’s significantly smaller than the Northwestern wolf.

The Arctic Wolf has a thick white coat of fur that helps them to camouflage in their cold environment. These wolves primarily live on the tundra, where they hunt for prey such as caribou, deer, and muskoxen. They also scavenge when necessary.

Arctic Wolves are known to be very social animals and typically live in packs of around six to twelve individuals. However, some packs have been known to number up to forty members or more! Their large size allows them to take down prey much larger than themselves – including adult caribou, muskoxen, and moose.

Related: What do arctic wolves eat?

The Tundra Wolf (Canis lupus albus) is a subspecies of the Gray Wolf that is found in the Arctic regions of Eurasia. They’re also known as the Turukhan wolf.

Their fur is long and thick, which helps protect them from cold temperatures. They have a wide range, living in tundra, taiga, and open barren lands.

Tundra Wolves prey mainly on large hoofed mammals such as caribou, musk oxen, deer, and elk. They also eat smaller prey like beavers, rabbits, and hares. They are pack animals that hunt in groups.

They can run up to 60 kilometers per hour (37 mph) for long distances.

The steppe wolf (Canis lupus campestris) is a subspecies of gray wolf that lives in the Eurasian Steppes, more specifically the Caspian steppes, Caucasus, the lower Volga region, and southern Kazakhstan (amongst others).

The steppe wolf primarily preys on small prey such as rodents or hares. However, it will also take down larger prey if the opportunity arises.

It faces no major threats at this time, but could potentially be impacted by habitat loss or persecution.

The Great Plains wolf (Canis lupus nubilus) was one of the biggest wolves in North America. While they’re extinct now, they used to roam from the southern parts of Canada all the way to northern Texas. [4]

They weighed around 100 to 130 lbs and stood about 30 inches tall at the shoulder. The biggest Great Plains wolf recorded weighed 150 lbs.

Their fur was a mix of a wide variety of colors, but many were either completely black or white.

They lived in packs of up to 20 animals, but most packs only had six or seven members. These wolves primarily ate bison, elk, deer, and other large prey items.

The Mongolian Wolf (Canis lupus chanco) is native to Mongolia, northern and central China, Korea, and parts of Russia.

The biggest recorded Mongolian wolf was nearly five feet long from nose-to-tail, more than 40 inches tall at its shoulders, had an estimated weight of 176 lbs., and measured 36 inches across the chest.

Wolves, in general, vary greatly in size depending on geographic location – they tend to be smaller closer towards the poles due to cold weather conditions where food sources are scarce.

Mongolian wolves are scavengers as well as hunters; they’ll eat anything from small game to carrion (dead animals).

They live in packs of up to 12 individuals, led by a dominant alpha pair. These packs are incredibly tight-knit – members often hunt and travel together, and will take care of injured or sick pack mates.

The Himalayan Wolf (Canis lupus chanco) is lives in the Tibetan Plateau in the provinces of Gansu, Qinghai, Tibet, and Sichuan. They’re associated with the African Golden wolf due to its yellowish coat.

They have short, thick fur that comes in gray, black, and yellowish colors with white markings on their chests or legs.

Their diet consists mainly of rodents along with smaller livestock like sheep, goats, and horses when available.

The biggest threat for these wolves is humans due to habitat loss. This causes them to live closer together where they may attack cattle herds owned by people living nearby.

Himalayan Wolves do not typically get very large but some specimens have weighed more than one hundred pounds during adulthood while others weigh less than fifty pounds as adults.

This wolf is currently classified as endangered by the Threatened Species due to loss in habitat and a decline in their population numbers. They have been heavily targeted by people for livestock predation or bounty hunting.

The Himalayan Wolves Project [5] aim to understand and protect the Himalayan wolf, its habitat, and coexisting wildlife.

These wolves have been known to live up to fourteen years old in captivity but most likely do not live longer than ten years in the wild.

These are all bigger than the average wolves, ranging from 80 to 160 lbs for most individuals. This depends on gender and food availability, amongst other factors.

What Is the Biggest Wolf Species?

The biggest wolf species is the Northwestern Wolf, also known as Mackenzie Valley Wolf. They can weigh up to 190 to 200 lbs, though most are between 110 to 160 lbs. They can be found in Canada, Alaska, and the Northern parts of the United States.

What Is the Biggest Wolf Ever?

There’s much debate on the topic. Some believe the biggest wolf ever recorded to be a male weighing about 175 pounds (80 kg) with a body length of 103 inches (262 cm). Some belief wolves to reach far beyond this.

How Tall Can Wolves Get?

There is a lot of variety in wolf species because there can be anywhere from 14 inches to 37 inches high at the shoulder blades depending on breed type. The biggest wolves living today stand around 31-37 inches tall at their shoulders. Some very large gray wolves were recorded measuring 42-45″ (106 cm) at their shoulders.

How Much Do Wolves Weigh?

Wolves typically weigh between 70 to 130 pounds, but it very much depends on the species. Some wolves can reach upwards of 190 lbs, but this is highly unusual and uncommon.