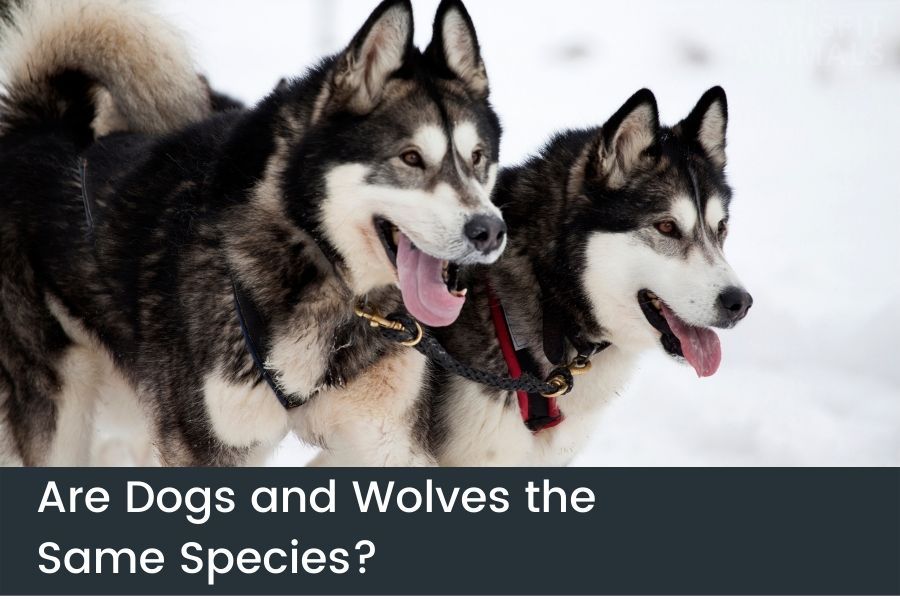 Dogs are a subspecies of wolves. Technically, they’re of the same species, as both animals share 99.9% of their DNA. Dogs and wolves were considered separate species for a long time.

What are dogs? What are wolves? Are they the same species or are they different species?

Those are some of the questions we’re going to cover in this article.

While some dogs still show similar traits as those seen in wolves, many domestic dog breeds have evolved to have very different appearances.

The Canidae family is often referred to as dog-like carnivores. This biological family includes dogs, wolves, foxes, and coyotes (among others). It is the largest terrestrial carnivore family.

Wolves are the largest members of the Canidae family. They’re native to Eurasia and North America, and there are more than 30 subspecies of the Canis lupus. They stand out with their larger body, more rounded ears, and a longer tail.

They also have other behavioral traits that set them apart, such as the way they live and hunt in packs.

Dogs are part of the Canidae family. Domestic dogs evolved from the wolf as they were domesticated by humans. While they originated from an extinct species of wolf, their closest relative is the gray wolf.

Coyotes are a species of canid that is very closely related to dogs and wolves. They’re a separate species and offspring of the wolf.

They’re smaller than wolve,s but can be found in many of the same habitats, such as North America. Other names for coyotes are prairie wolf and brush wolf, giving us a hunt of their origin.

Coyotes have been known for being both wild animals, but also pets/companions when given proper training.

Foxes are also related to wolves, as they’re also members of the Canidae family, yet they’re too “odd one out”. Most foxes don’t look like wolves, but some do have a slight resemblance.

Most people know the red fox, which is characterized by its red color as well as its slim and agile body.

Foxes have scent glands similar to those found in other members of the Carnivora order.

A Genus, on the other hand, is a category or further grouping of species. This taxonomy sites between “family” and “species” and are used to further specify the group.

Both dogs and wolves are part of the Canis genus. The genus and the species are what make up the scientific name, or Latin name, of a specific animal.

Foxes are split into two different genera, both Vulpes and Canis. Foxes in the Vulpes genus are considered “true foxes”.

Related: Can wolves and dogs mate?

When Were Dogs Domesticated?

Dogs are thought to be one of the earliest species that were domesticated by humans.

Although there are many theories about when this took place, studies of genetic data provide evidence that dogs and wolves separated about 23,000 thousand years ago.

At this point in time, scientists are still unsure how or why people started domesticating these animals. [2]

Some experts believe it was because humans could hunt better with the help of dogs while others think they were used for protection instead.

How Do We Know Wolves and Dogs Are the Same Species?

Research shows that dogs are descendants of an extinct wolf species. We know this due to DNA analysis, as well as similar gene traits across wolves and dogs.

There have been done multiple studies on the DNA between wolves and dogs.

Dogs and wolves share 99.9% DNA, which tells us they’re related. Through research, experts have concluded that wolves and dogs are both subspecies of the Canis lupus.

This means that domesticated dogs are actually a type of grey wolf.

The modern-day wolf and the domestic dog shares 99.9% of their DNA. That’s because dogs are a subspecies of wolves.

A study on DNA found that dogs are more closely related to gray wolves than eastern timber or red wolves.

These concluded that these three types of wolves are all subspecies under Canis lupus – not separate species like originally thought.

The main difference between dogs and wolves is their appearance and behavior. This includes size, coat length, weight, and facial characteristics such as ears and overall body shape from head to toe.

Dogs have been bred over many generations into all kinds of breeds. Some of these look more like wolves than others.

While dog breeds don’t always look alike, they all have the same ancestor.

Related: What dog is closest to a wolf?

As stated, the domestic dog is a subspecies of wolves, yet they’ve been bred into many different breeds over the years.

In the beginning, breeding was done to enhance certain behavioral traits, such as their hunting capabilities. Nowadays, selective breeding amongst dogs is mainly done for looks.

In the end, dogs are a subspecies of wolves, meaning they’re not entirely the same.

There are a lot of physical differences between dogs and wolves.

Wolves are bigger than dogs, both in height and weight. Wolves also have much larger teeth than those found on domestic dog breeds. Their ears are stiff and slightly rounded, while many dog species have floppy ears.

Some dogs are also very small, such as the Chihuahua, only weighing 4-8 pounds, while wolves weigh 80-175 pounds.

Wolves are incredible hunters, which is one reason why they were originally domesticated. Many dog breeds don’t show the same level of hunting instincts as wolves anymore.

Many dogs are also natural-born hunters though, such as the Bloodhound.

They possess many of the same instinctive behaviors such as chasing, barking at moving objects, alarming nearby intruders, carrying things around in their mouths (prey), and chewing on bones.

Some people believe that dogs are more cooperative and prosocial than wolves due to domestication. Research however shows that wolves are much more prosocial than dogs. They’re more inclined to work with their pack.

There are many similarities between dogs and wolves. Both are pack animals with a hierarchal structure of dominant, submissive, and cooperative traits.

They also show many other similar behavioral traits, such as digging, vocalization, and others.

Wolves are known to communicate by howling, barking, and growling. They are typically very vocal creatures, much like many dogs.

Some dog breeds aren’t very vocal, as it’s something humans have phased out during domestication. This has caused them to develop more of a reliance on non-verbal communication methods such as sniffing and tail wagging.

Territoriality is one of the main similarities between dogs and wolves. All wild canids are territorial, and so are dogs.

Dogs and wolves are typically very guarding over what they consider their possession, whether it’s food or territory.

Some breeds are more territorial than others; for example, a Chihuahua will be less protective of its territory than a Rottweiler guard dog would be.

Both wolves and dogs dig, but they may do so for different reasons.

Wolves typically dig to find food, to make a den, or to find a cool spot during hot summer months. Dogs usually dig for play or for stress-relieving.

The act of digging itself has not been found to be unique only among domestic canines. It also occurs with other wild members within the Canidae family including foxes, jackals, African Wild Dogs, and even Coyotes.

Wolves and dogs are considered to be both the same species and different species, as dogs are a subspecies of wolves. The two animals share 99.9% of their DNA, which tells us the two are very much related.

Domestic dogs and wolves show much of the same behavior, such as a tendency to be prosocial, using vocal communication, and being very territorial.

They also show differences, mainly in regards to their appearance.