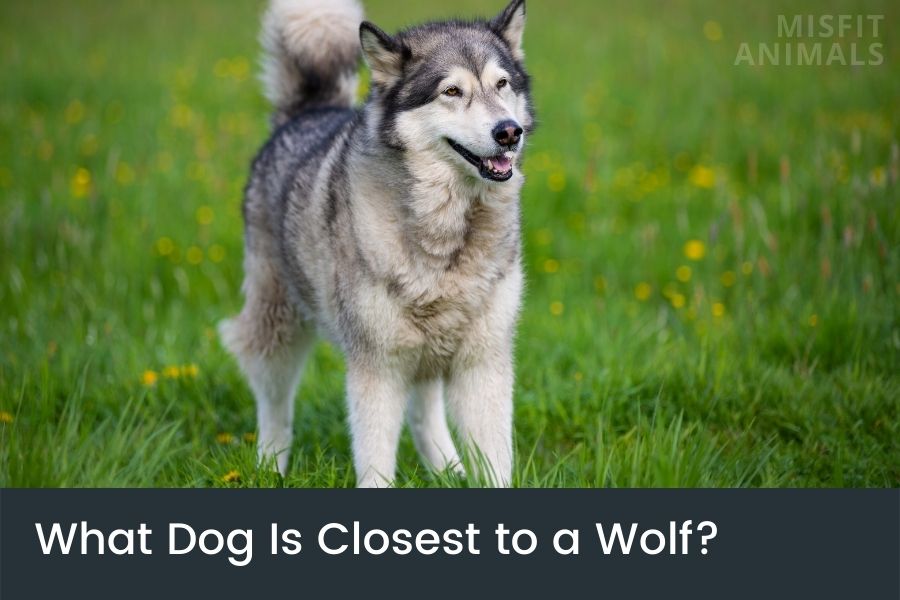 There’s much debate about what dog breed bears the closest resemblance to a wolf.

In terms of DNA, some people believe either the Saluki, Shiba Inu, Chow Chow, or the Shih Tzu to be closest related to a wolf (among others).

When it comes to wolf-like appearance, the closest dogs to wolves are the Alaskan Malamute, Czechoslovakian Wolfdog, and Siberian Husky.

Wolves and dogs share close to 99.9% of their DNA, making all dog breeds very close to wolves. However, a few stand out amongst the crowd.

The Saluki is one of the dog breeds that are closest to wolves in DNA. They are known for their long legs, slender build, and pointy ears. Many of these traits are also seen in wolves.

Salukis have been used for hunting since ancient times and are still popular today as racing dogs. They are also sometimes used as therapy dogs.

Salukis share many characteristics with wolves, including their strong prey drive, high intelligence, and pack mentality.

The Afghan Hound is also very close to wolves in terms of DNA. It is believed they share 99.9% of their genetic makeup with wolves when you compare breeds.

They also have similar physical characteristics, including long legs and hair that forms dreadlocks on their hindquarters.

Afghan Hounds were originally bred for hunting gazelle in Afghanistan. These dogs need lots of space to move around so it’s important not to keep them in an apartment or area where there isn’t much room for exercise or playtime outside.

They are very popular among royals all over the world due to their beautiful looks.

It is most closely related to the Saluki.

The Alaskan Malamute is a strong dog breed with a great work ethic. They resemble wolves, not only in DNA but also in terms of looks.

They are known for their thick fur coats which keep them warm in cold climates.

Alaskan Malamutes share many physical characteristics with wolves, such as their large size, thick fur, and pointy ears. However, they are not as aggressive as wolves and make great family pets.

The Siberian Husky is very close to wolves. In fact, their DNA traces directly back to an ancient wolf species called the Siberian wolf. [1]

Huskies share many physical, and behavioral, traits with wolves, such as their pack mentality, stamina, and their overall body structure.

While they’re smaller than wolves, you can see the resemblance.

The Czechoslovakian Wolfdog is a relatively new breed, created in the 1970s by crossing German Shepherds and Carpathian Wolves.

This breed is a wolfdog, meaning they’re a direct crossbreed between domestic dogs and wolves. Hence, they’re very much related to wolves.

They are bred for their resemblance to wolves, as well as their intelligence, strength, and agility. While they may look like wolves, they act more like dogs – loyal and friendly to their families.

The Shih Tzu is a small dog breed that was originally bred in China. They are known for their long, flowing hair and playful personalities.

This one may surprise most people. While they may not look like wolves, they do share a high level of DNA similarities.

The Shih Tzu is a descendant of the domesticated Chinese wolf, which means they have similar characteristics.

While the Pekingese dog breed doesn’t resemble wolves in terms of looks, they’re very related in DNA. These dogs were bred to resemble lions but ended up as relatives to the wolf.

They have a long, thick coat of fur that helps protect them from the cold weather and they are also known for their fierce temperament. Pekingese dogs were once used by imperial Chinese families as palace pets.

The Lhasa Apso is a small, long-haired dog with low activity levels. They don’t resemble wolves, either in looks or appearance, yet they’re close relatives.

This breed makes for a great companion animal. They’re small and friendly to humans. They’re less friendly toward strangers, but very loving toward their owner, or people they otherwise know.

The Shiba Inu is a small, agile dog that almost looks like a crossbreed between a wolf and a fox.

They are considered an ancient breed and were originally bred for hunting in Japan.

Shibas have a thick coat of fur that comes in several different colors, including red, black, tan, and cream. They are known for their independent personality and often require plenty of exercises to stay happy and healthy.

The Tibetan Terrier is a small, sturdy dog that shares both physical similarities and differences with wolves. [3]

Like wolves, Tibetan Terriers are highly adaptable and can live in a variety of different climates. However, they have long, floppy ears, and were originally used as heard dogs.

The Chow Chow is a dog that is known for its fluffy coat and blue-black tongue. It’s a Chinese breed (called Songshi Quan), which translates to “Puffy Lion-dog”.

The Chow Chow has many wolf-like features, such as their heavy coats and upright ears, but were bred to look like lions.

This African hunting dog has DNA that is nearly identical to that of wolves, and they look very similar as well. The basenji is a small, agile dog with pointy ears and strong muscles.

They are typically black or tan in color and have short fur that doesn’t shed much. Basenjis are known for being independent and aloof dogs, but they can also be loyal and protective of their family members.

As the other dogs on this list, they predate the emergence of modern dogs from the 19th century.

The Samoyed is a Siberian dog breed that is known for its resemblance to wolves. The white color makes them look like the Arctic wolf.

In fact, the Samoyed was originally bred as a working dog to herd reindeer and pull sleds, much like the Siberian Husky.

The Samoyed has a thick coat of fur that protects it from the cold weather, and it also has a tail that curls over its back like a wolf’s tail.

The Shar-Pei is a breed that is known for its wrinkles. This breed was originally used for hunting, herding, and guarding livestock. The Shar-Pei can weigh anywhere from 35 to 65 pounds and stand up to 20 inches tall at the shoulder.

They come in all colors, except white.

The Akita is, by some, believed to be the closes relative to wolves (within the realm of dogs). They look much like wolves, with their pointy ears, strong build, and big fur coat.

Akita Inu’s can also get almost as big as wolves, just a few inches smaller, and weigh a few pounds less.

These dogs were originally used as guard dogs and hunting companions, giving them an edge over other breeds. In addition to their wolf-like looks, these dogs are known for being loyal protectors who can be fiercely protective if they feel threatened or need to defend those closest to them.

What Dog Is Closest to a Wolf?

Related: Are dogs and wolves the same species?

What Dog Is the Most Related to a Wolf?

The closest dog to a wolf is the Saluki, which originates from ancient Egypt. These dogs are almost directly related to wolves, as their genes tell a tale of how they evolved from wolves into domestic dogs.

What Dog Breed Has the Most Wolf DNA?

Almost all dog breeds have 99.8-99.9% similar DNA as wolves. This means all dogs are related to wolves. There are a few species that have more wolf DNA, including the Saluki, Afghan Hound, and Pekingese.

What Is the Closest Related Animal to a Wolf?

Wolves are closely related to dogs and coyotes. These three animals are most related to each other but are also related to others, such as the fox.