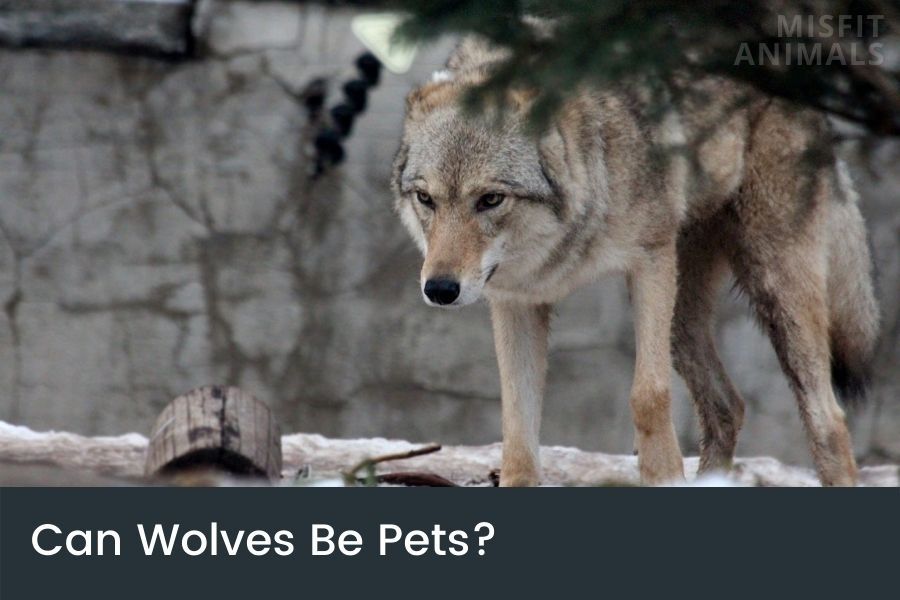 Technically, wolves can be pets, but it’s illegal. It’s illegal in most countries. However, hybrid wolves (wolfdogs) can be kept as pets. Wolves are not fit to be pets though.

Are you playing around with the idea of having a wolf as a pet?

Wolves can be dangerous pets for many reasons.

Wolves can’t be house trained the way dogs can, and they need plenty of space to roam around.

They are also wild animals that can turn aggressive when provoked or if their territory is invaded, something no owner wants.

If you want to learn more about keeping wolves as pets, or why it’s a bad idea, we’ll give you all the information you need right here.

Can Wolves Be Pets?

Generally, no. Wolves aren’t fit to be pets, and it’s illegal in most countries. They’re difficult to train, and can’t be fully tamed.

The answer to this question is a resounding “no.”

Wolves can’t be pets in the same way that dogs can. They are wild animals and they need plenty of space to roam and exercise. They also require specialized care, which most people aren’t able to provide.

Training a wolf takes a lot of time and effort – much more than what is necessary for training a dog.

It’s also illegal to own a true wolf as a pet in most countries, so you’ll have to do your research if you’re interested in this option.

If a wolf is more than 98% pure, it’s considered as a true wolf.

Do Wolves Make For Good Pets?

No, wolves don’t make for good pets. They’re not domesticated like dogs and aren’t used to human interaction. They tend to stay away from humans.

There is a lot of confusion about whether or not wolves can make good pets. The answer, quite simply, is no, as they can’t be domesticated in the same way as dogs can.[2]

However, that doesn’t mean they can’t be trained at all; it just takes a lot more time and effort than with other animals.

One of the main reasons why wolves can’t make good pets is because they require a great deal of space. They aren’t suited to living in small apartments like dogs are, and will become restless and destructive if cooped up for too long.

Wolves also need plenty of exercises, which most people aren’t able to provide them with.

People who have successfully trained wolves say that they can’t be treated like dogs or other pets. Some wolves want to establish themselves as the alpha, which clashes with the idea of keeping pets.

They won’t listen if commanded by their owner in the way that most animals do, which can also make them dangerous.

Dogs are domesticated animals that have been bred to take cues from humans. They can be trained to perform various tasks and can be loyal companions.

Wolves, on the other hand, are not domesticated and do not take cues from humans in the same way dogs do. In fact, wolves are dangerous wild animals.

Wolves cannot be easily trained like dogs can, and will never be considered fully tamed. They will always have their natural, wild instincts, which can be triggered if they’re threatened or provoked.

This makes them dangerous to have in the home.

That said, there are ways to tame and train wolves, it just takes a lot of time and commitment. Wolves can provide interesting companionship, but they should never be underestimated as they are still wild animals at heart.

They Need a Lot of Space

Hence, wolves need a lot of space to roam around in.

They need lots of room to run around and explore. If you can’t provide them with enough space, they will become restless and destructive. They may also start to howl or whine, which can be very annoying for your neighbors.

Typically, you also want to provide them with a place to hunt. As wolves are apex predators, they hunt for their food. Not allowing a wolf to let out its natural aggression can end badly.

Wolves Have a Specific Diet

Wolves require a very specific diet in order to survive.

Dogs are omnivores and can eat both meat and plants, but wolves are carnivores and need to eat mostly meat in order to thrive.

They also eat a lot, between 2 to 7 pounds of meat a day. This means that feeding a wolf at home would be very expensive and difficult.

When wolves hunt, they prefer to hunt ungulates. These are large, hoofed animals, such as moose, elk, deer, or bison.[3]

Wolves are wild animals. While they typically don’t attack humans, they’re still considered dangerous. Hence, it’s illegal to own a wolf in many countries.

Now, wolves can somewhat be trained – it just takes time and commitment.[4]

It’s important to note that trained wolves are still wild, and may still attack humans or other pets.

Wolves can’t listen as dogs do; instead, you need to earn their trust before teaching them anything new or trying to train them.

If not properly socialized while young (before the age of 18 weeks), problems can arise. Working with adult wolves is even more difficult than training a wolf you’ve interacted with since its birth.

Wolves are social animals, and they need almost non-stop social interaction. This means, if you’re alone about raising a wolf, you can’t leave the house.

Wolves live in packs, often made up of 6 to 8 members. This allows them to interact with each other all day long, but that may not be the case in captivity.

If wolves don’t interact with others, they’ll become lonely, stressed, depressed, and restless, which can cause them to act out. Something you definitely don’t want a wolf to do.

Wolves Are Incredibly Territorial and Protective

Wolves are incredibly territorial creatures; they live in packs for this reason. They mark their territory with urine, feces, or by scratching trees (much like cats).

Wolves are also protective of their family or possessions: food, bones dug up from the earth (which can take days), pups they give birth to/raise, as well as their mate.

Sexual Maturity Can Cause Problems

One thing to keep in mind is that sexual maturity can cause problems for wolves kept as pets.

During the breeding season, territorial and assertive behavior increases, as wolves’ natural instinct is to have a single breeding pair. If your wolf is alone, it’ll assume that it’s the breeding male.

Male wolves can become very aggressive during this time, and may even attack their owners. Female wolves can also become more aggressive than usual and may start trying to escape from the home or yard.

Wolves Are Fond of Children

As stated before, they’re very protective of their family. Hence, they’ll bond with and care for children in the home, much as they do with their own pups.

Can Wolves Be Tamed?

No, wolves can’t be tamed. No matter how much you train them, or how much they get used to you, they’ll always be considered wild animals.

The word “Tame” is defined as:

“not wild or dangerous” – Cambridge Dictionary

Wolves can be trained, but they can never really be domesticated the way that dogs are[4]. Dogs have been bred over millennia to become loyal and obedient animals that humans can rely on, while wolves have retained their wild instincts.

They don’t respond well to commands as dogs do, and they can be dangerous if not properly managed.

It’s important to remember that these animals are wild, no matter how much training they’ve received. They will always retain some of their unpredictable nature.

Before considering bringing a wolf into your home as a pet, you should carefully research all the potential risks involved.

Related: Can wolves be tamed?

Can You Train a Wolf?

Yes, it’s possible to train a wolf, though not to the extent that you can train a dog. Wolves can become used to human interaction.

Wolves can’t be trained in the same way as dogs. They are much more independent and require a lot of space.

Even though you’ve trained a wolf a lot, it won’t take cues from humans as dogs do. They’ll do their own thing if they please.

Wolves are dangerous wild animals and can be very difficult to handle if they aren’t properly trained from an early age.

Can You Own a Wolfdog?

Yes, you can own a wolfdog. They’re easier to train than wolves but more spontaneous and aggressive than dogs.

A wolfdog is a hybrid between a wolf and a dog. They inherit traits from both and are typically more friendly towards humans than wolves, but less trainable than dogs.[3]

Wolfdogs can make great pets, but they’re not right for everyone. They require a lot of training. However, if you have the time and commitment to devote to one, a wolfdog can make a great pet.

It’s illegal to own a true wolf in most countries, so it’s important to know the difference between wolves and wolfdogs.

If you’re interested in owning a wolfdog, it’s important to find a reputable breeder. Make sure the breeder is knowledgeable about wolves and wolfdogs and can provide you with plenty of information about the breed.

Wolfdogs can be expensive, so make sure you can afford one before you buy.

Is It Safe to Own a Wolfdog?

Whether or not it’s safe to own a wolfdog depends on its owner and training. With enough commitment, they can be very friendly.

Wolfdogs aren’t legal everywhere, which may give you a hint of whether or not they’re safe to own.

As they’re a cross between dogs and wolves, they inherit some wild traits from the wolf. They can both be friendly or aggressive toward humans, which, without proper training, can make them dangerous.

These hybridized offspring are typically very unpredictable due to their mixed genetics. Some will act more like their wolf ancestors than their dog ones.

Some owners may believe that, because they’ve tamed and trained their wolfdog from a young age, it can no longer hurt them. Unfortunately, this is not always the case as even tame wolfdogs can revert to their wild nature if startled or threatened.

Wolfdogs are also much stronger than your average dog and can easily inflict serious injuries on people, or other animals in the home.

Wolves can be pets, but won’t be tame or domesticated. It’s generally a bad idea. They’re dangerous animals and they won’t listen to humans as dogs do. You also need a lot of space for them to roam around in, and it’s illegal to own a true wolf in most countries.

However, with enough commitment, they can be trained.

Wolves also eat a lot and need a specialized diet, which will be a lot more expensive than regular dog food. Wolves eat meat, either from small or large animals.