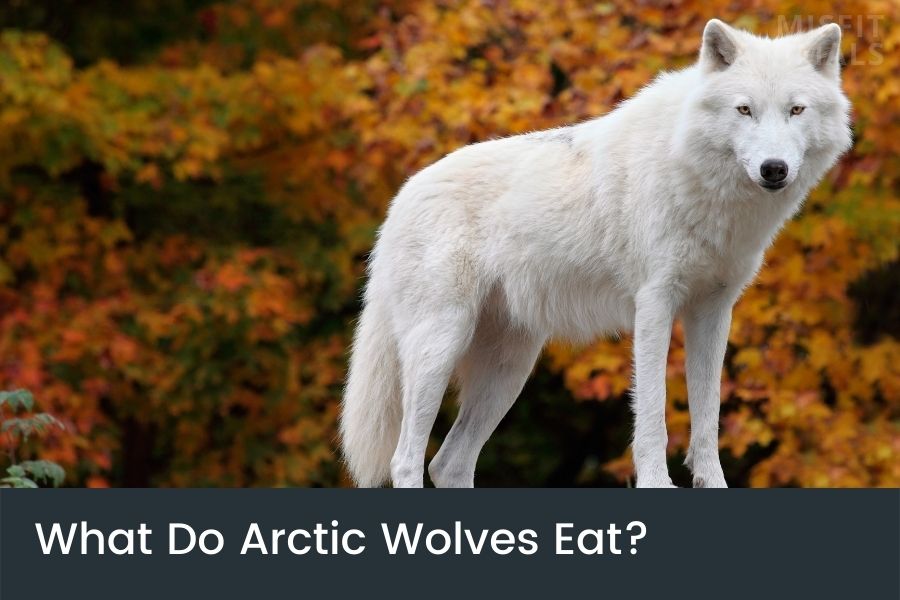 Arctic wolves eat what they kill, but prefer ungulates such as moose, caribou, or musk-oxen for a meal. They also hunt smaller animals such as arctic hares, snow owls, or lemmings to keep up with their high metabolic rate.

Arctic wolves are members of the Canis lupus family and live in the Arctic regions of North America and Greenland. They’re also known as the polar wolf or white wolf.

These beautiful canines have thick fur that protects them from the harsh, cold temperatures of their arctic habitat.

In this article, we’ll go into detail about the animals that Artic wolves eat.

What Do Arctic Wolves Eat?

Arctic wolves, like all other wolves, prefer to feed on ungulates, like moose, caribou, and musk-oxen. They do also hunt for smaller animals such as Arctic hares, snow owls, and lemmings.

Wolves like bigger prey, as they provide more food, meaning they don’t have to hunt several animals.

Caribou are the preferred prey of Arctic wolves. They prefer these ungulates because they provide a lot of food.

Wolves need to eat anywhere from 5-7 pounds of meat every day if they want to reproduce. With 8 members of the pack, that’s 40 pounds of meat per day.

Caribou, or other ungulates, make up about 80% of the Arctic wolf’s diet during the winter months. During spring and summer, when ungulates may be harder to find, they have been known to switch over and hunt smaller animals such as Arctic hares or lemmings instead.

Musk-oxen are the largest prey that an Arctic wolf can successfully bring down on its own. Wolves will only attempt to take down prey of this site when they’re hunting with the pack.

Alone, a wolf would never be able to take down such an animal.

Arctic wolves, as well as grey wolves, often hunt and kill moose. Its one of the wolves’ preferred animals to feed on.

Moose inhabits many of the same habitats as the Arctic wolf [1], hence the two often cross paths. While it’s still dangerous for wolves to hunt moose, as they can use their antlers to protect themselves, wolves do like the challenge, as well as the reward.

If no ungulates are around, wolves will target smaller animals, such as Dall’s sheep (if given the opportunity). They are not easy prey though. They have big and strong horns which they use to fend off predators during attacks.

Dall’s sheep are tougher and completely white, sheep and rams. [2]

Arctic hares are very often hunted by wolves, as there are many of them. They are fast but are no match for wolves.

When wolves are hunting alone, they’ll target smaller prey. Here, Arctic hares are great prey to target. Wolves will hunt them down, bite on to them, and either kill them by biting or by shaking them until their neck breaks.

If given the chance, Arctic wolves will also prey on snowy owls. These are more difficult to catch though, as they can fly. When hunting flying burds, wolves take a sneakier approach to hunting.

These owls are small, at about four pounds each, and hence provide a good snack for a single wolf.

Arctic wolves are also known to attack penguins. Penguins are a type of bird that lives in Antarctica and swims around in the ocean hunting fish with their beak. As they can’t fly, they’re easier prey than snowy owls – at least on land.

If penguins flee to the ocean, before they’re caught by wolves, they’ll get away easily, as they’re incredible swimmers. The fastest penguins can reach upwards of 20 mph (32 kpm).

Seals provide a great meal for wolves. Seals have a high-fat content, which is great for wolves to build a bigger layer of fat. Fat helps wolves reduce heat loss, making them better suited for the cold climate.

Adult female gray seals can weigh about 550 pounds, while males can weigh as much as 700 pounds. [3]

Lemmings are small rodents that are found in the Arctic tundra. They create large annual migrations, where they travel from their summer grounds to winter dens. Wolves have been known to follow lemming herds over long distances.

While wolves typically don’t migrate, they will do so to follow their food. Wolves have been known to travel as much as 30 miles per day.

If wolves get the chance, they may even prey on eagles. These are very difficult to catch, as they’re known for their flight speed. If they take off before being caught, they’ll easily get away.

Sometimes, the roles reverse. If wolves are badly injured, or close to dying, eagles may even prey on wolves. This is a rare sight but can happen.

Ptarmigans are medium-sized birds with short, stout bills and legs. They are most closely related to black grouse in the genus of Tetraonidae.

Like many grouse species, ptarmigans have adapted well to living where they live in cold climates their dense plumage is covered in feathers that keep them warm during winter months when food sources are scarce.

As with other birds, Ptarmigans make for a snack-sized meal for wolves and may be tricky to hunt down.

Arctic foxes (Vulpes Lagopus) are small, carnivorous mammals that live in the Arctic regions of the Northern Hemisphere and usually den on permanent ice.

These animals are known for their white winter fur. Wolves see foxes both as a possible meal, but also as competition, as they often prey on many of the same smaller animals (such as lemmings or Arctic hares).

Polar Bears are known to hunt the same prey as Arctic wolves. The main staples in a polar bear’s diet include ringed seals, bearded seals, and walruses. Polar Bears are also known as the marine mammal of the Arctic because they spend a lot of time in the water.

Sometimes, Arctic wolves and polar bears cross paths in the wild. While this doesn’t always end in a fight, it just might. This is especially seen when wolves try to hunt for polar bear cubs.

Carrion-eating is when animals eat already dead animals, the leftovers of a kill. Some wolves have been observed eating carrion.

Wolves typically do this when they’re starving, or if there’s a lack of prey they can hunt.

Wolves hunt their prey using different strategies depending on what type of animal it approaches. For larger animals, they’ll hunt in a pack. Wolves will tire out their prey by chasing it down, surrounding it, and striking at just the right time.

They’ll bite into the shoulds or the flanks to weaken their prey, and then move on to deliver the fatal bites.

Wolves are also known to eat fruits, vegetables, berries, or other plants if there are no animals around to hunt.

Arctic wolves eat a variety of animals they can find in their native habitats, such as caribou, musk-oxen, moose, Dall’s sheep, Arctic hares, and other smaller animals.

They prefer to eat ungulates, or generally bigger animals, as these provide more food for the pack. If they’re hunting alone, they’ll stick to hunting smaller animals, as they can’t take down big prey alone.

Arctic Wolves are large and impressive predators that live in the harsh conditions of the Arctic. They’re perfectly adapted for their environment, with thick fur coats to protect them from the cold and strong jaws so they can crush through ice or snow crusts.