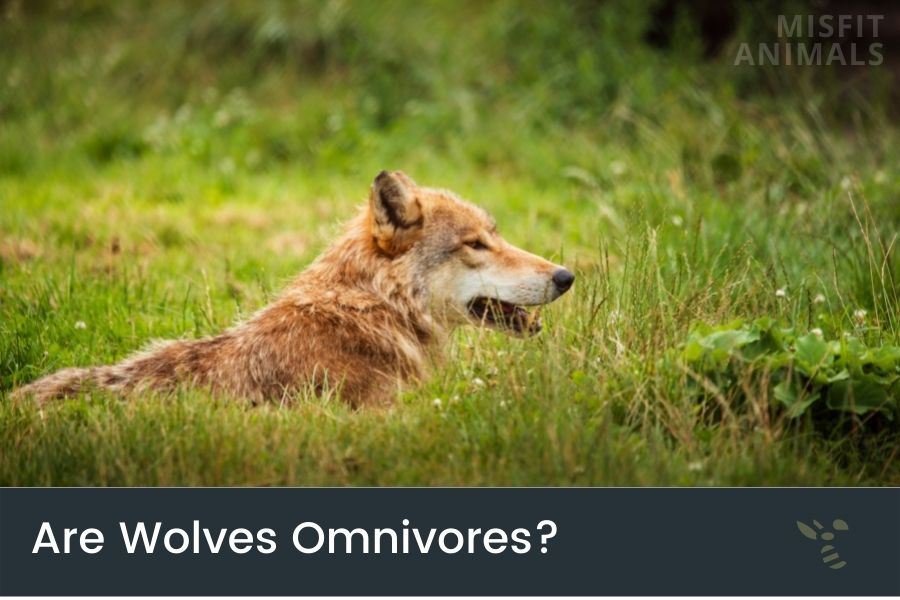 Wolves are primarily carnivores but will eat plants if food is scarce. Wolves are omnivores in the sense that they can survive on both plant and animal matter. They can only survive on a vegetarian diet for a short while.

Even though wolves are apex predators on top of the food chain, they still eat vegetables and fruits from time to time.

They most often do this when there’s little or no access to prey.

Wolves are not herbivores because their diet includes meat. However, wolves are also scavengers who will eat anything from small insects to rotting carcasses if nothing else is available.

What Do Wolves Primarily Eat?

Wolves are primarily carnivores, meaning that they eat meat. The prey of choice for wolves are large ungulates like elk, moose, and deer. They also hunt other smaller mammals like beavers and rabbits, as well as fish.

Wolves are opportunistic carnivores, meaning, if no prey is around, they will feed on plants, such as berries, instead. Plants make up about 20-25% of their diet depending on season and availability in a given area.

Yes, wolves are carnivores, but they are not restricted to eating meat. They are actually known as “opportunistic” feeders because of their flexibility with food choices and prey preferences.

As predators that hunt in packs, wolves can easily take down large prey like elk or deer if need be.

But this doesn’t mean that plants are off the table. [2]

If no other options are available for a wolf pack to survive, they will eat vegetation.

Wolves are carnivores, but can also be called opportunistic omnivores. Omnivorous animals eat every, both plants and meat, depending on their needed nutrients.

While wolves do eat plants, they mainly do so when there’s no prey around, hence they’re not fully omnivorous. However, studies do show that they intentionally eat a little vegetation.

When wolves eat plants, they prefer berries or other fruits.

Wolves are not herbivores.

While they are carnivorous, their diets are often supplemented with plants and other vegetation when prey is scarce or unavailable.

Wolves have been observed eating berries, fruits, nuts, and seeds if these items are available in the area where they’re hunting for food. They may eat them as a snack or sweet treat.

Wolves have also been observed eating grass if their stomach is upset, much like dogs. [3]

In addition to this supplementation of a primarily meat-based diet with plant matter, wolves will also eat insects from time to time as well as eggs from birds’ nests.

Do Wolves Eat Vegetables and Plants?

Yes, wolves do eat vegetables, fruits, and plants. They do so intentionally, especially in the summer when these are easily accessible.

Wolves can most accurately be described as opportunistic feeders, which means that they take advantage of whatever foods are available to them.

This does include fruits and vegetables but mostly consists of meat though.

Studies show that wolves especially like berries as a sweet treat. [4]

As mentioned, wolves may also feed on grass. They do this because of the fiber in the grass, which can help with an upset stomach.

Yes, wolves do eat grass from time to time. They do this for two reasons [5]:

While wolves are primarily carnivores, as we’ve established, they do eat grass if they need the fiber. Grass, as opposed to fruit, is full of fiber (40-50% in most grasses).

Why Are Wolves Carnivores?

Wolves are carnivores, meaning they are meat-eaters. They’re carnivores because they’ve evolved to benefit the most from meat protein.

Carnivores have sharp teeth, claws, and strong jaws, as they need to be able to tear flesh and bones apart. Wolves have all of these traits and use them when hunting and killing prey animals. [6]

Because wolves are carnivores they primarily get their energy from meat and protein rather than plants and carbohydrates.

No, wolves are not purely carnivores. Most carnivores do supplement their diet with some form of vegetation, such as grass, fruits, or other legumes.

In other words, they’re opportunistic feeders.

This means that wolves will feed on whatever is available, which might include plants if nothing else was found.

What Animals Do Wolves Hunt?

Not only are the animals listed above preyed upon by wolf packs but so are smaller mammals such as rabbits, mice, etc.

Wolves are also known to fish. They most often do this when ungulates aren’t present, or when the fish season is at its peak.

Ungulates are animals with hooves. Some are large, like moose and elk, others are smaller like deer. Wolves are not picky eaters so they will hunt any form of ungulates.

Wolves prefer ungulates, as they provide a lot of meat. Ungulates are larger in stature compared to other available prey, such as rabbits. This way, there’s enough food for the entire pack.

When they hunt ungulates, they will usually tire them out first. This way, they have to spend less energy when taking down the animal.

Small mammals are another common prey for wolves. If they can’t find any ungulates, they’ll hunt down rabbits, hares, raccoons, and other similar animals.

Fish are a popular food source for wolves and are often what is preyed on in freshwater habitats.

Much like bears, they’ll go fishing for food. They do so by using their large claws to catch the fish as they swim by.

Wolves also eat rodents. They are known to eat beavers, muskrats, mice, and other small rodents. When larger prey isn’t available, they won’t shy away from hunting down smaller animals, such as rodents.

Birds are often prey for wolves. Wolves have been known to hunt geese, swans, ducks, pheasants, grouse, and even small birds like sparrows or quails.

Wolves may have a harder time hunting birds than other prey, and birds can easily escape by flying away. But if a wolf comes by an easy picking, they’ll surely take down a bird.

Wolves are primarily carnivores, but that doesn’t mean they won’t eat plants if nothing else is available. The bulk of their diet consists of meat from ungulates or small mammals. However, when there are no large mammals to hunt, wolves will turn to vegetation.

Wolves are also opportunistic feeders which means they’ll take advantage of any available food. They can’t live off of a completely plant-based diet though, so they prefer to only use plants, fruits, and other vegetation as a supplement.

Wolves also eat grass from time to time. This is most often done if they have an upset stomach, as the grass is full of fiber.