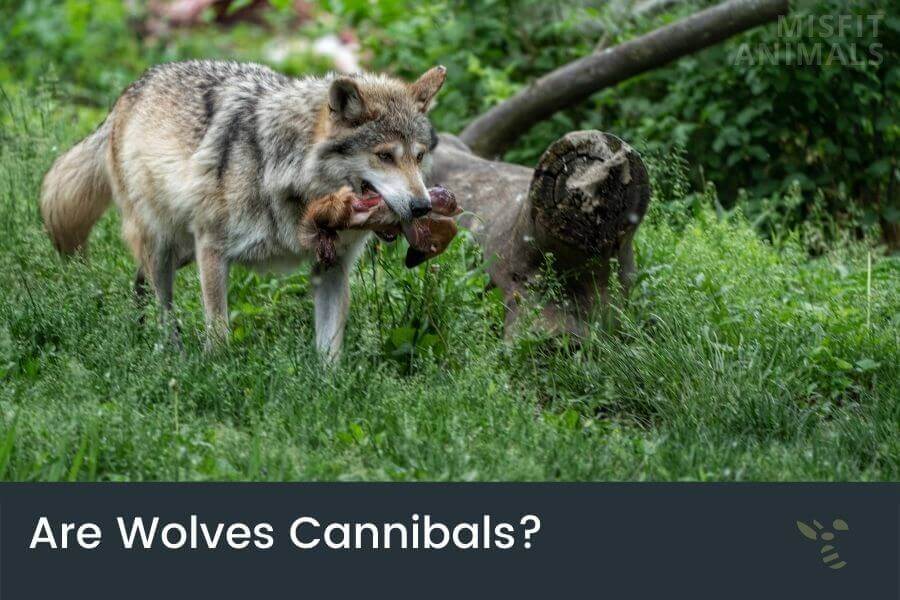 Wolves are typically not cannibals, but it is not completely uncommon either. They may kill wolves from other packs, but won’t eat them unless food is scarce.

Even though cannibalism occurs frequently in the wild, it’s not the case for wolves.

They’re carnivorous predators, hunting other animals for food (but will at times eat plants).

In this article, we’ll talk more about the eating habits, hunting tendencies, and possible cannibalism seen in wolves.

Do Wolves Eat Each Other?

Wolves may eat other wolves. Wolves are carnivores, usually feeding on ungulates, small mammals, and other small prey animals. If food is scarce, they may eat their own – but they won’t kill them.

Wolves may eat members of their own pack if they’ve died from external causes. They won’t kill pack mates themselves.

Do Wolves Kill Each Other?

Wolves do kill each other, but only wolves from other packs. Wolves have close social bonds with their pack, meaning they see other members as family.

Occasionally, two wolf packs may get in a fight. Wolves won’t hesitate to kill wolves from other packs, but they most likely won’t feast on them afterward.

Cannibalism of wolves from other wolf packs may again occur if food is very scarce.

Related: What eats a wolf?

Do Wolves Kill Members of Their Pack?

Why Do Wolves Kill Each Other?

Wolves kill wolves from other packs mainly due to control. They’re territorial creatures, and very protective of their pack, territory, and food sources.

If a rivaling wolf pack invades the territory of a pack, they may very well end in a fight, that results in death.

Now, this may not always happen. If one wolf pack is simply crossing through the territory of another’s, and if they show submission, they may be harassed, but not killed.

To Protect Their Pups

Wolves are very protective of their pack, especially their pups.

The females of the family group stay together to raise young while the male wolves patrol the territory, protecting it from other animals such as bears or even larger packs of canines that might try to take over.

If any predators are threatening their pups, they will attack.

Wolves will often kill pups of rivaling groups in an effort to restrain their reproduction. This way, they can eliminate competitors before they become threats.

Related: How Do Wolves Protect Themselves?

To Establish Their Territory

Wolves are territorial animals that establish dominance by patrolling and scent marking specific boundaries. When a new wolf pack attempts to move into an established territory, the current occupants will fight off the newcomers until they leave or are killed.

Do Wolves Attack and Eat Dogs?

While wolves and dogs are related, wolves won’t hesitate to attack and kill them.

Especially hunting dogs running into the forest are threatened by wolves. Wolves see them as competitors and will treat them like they’d treat a rivaling pack: kill them. [2]

Wolves will also eat dogs, while it may not be their preferred food source. This most often occurs when food is scarce, as they prefer ungulates or small mammals and rodents.

Do Wolves Eat Wolves From Other Packs?

Wolves live in packs, each pack containing multiple members (3 to 20). Different packs see each other as rivals, or competitors, as they compete for territory and food (especially in areas where food sources are scarce).

Due to the aggressive nature of wolves, it’s only natural that they fight when they encounter each other.

As stated earlier, wolves are typically not cannibals, but cannibalistic behavior can occur. In short, wolves can eat wolves from other packs.

Wolves do prefer ungulates though, as their meat contains most of the nutrients that wolves need.

Protein is the most important nutrient for wolves though, hence if there’s no other food around, they may choose to get their protein intake from other wolf packs.

Is It Cannibalism if a Wolf Eats a Dog?

Technically, no. When wolves eat dogs, they’re not eating the flesh of one of their own species.

Cannibalism is defined as follows:

Wolves and dogs are in the same family: Canidae. Thousands of years ago, wolves were domesticated by humans, which caused them to evolve into less threatening and more friendly animals.

Because of this domestication, wolves and dogs are now two different species, though still related. Sticking to the definition of cannibalism, dogs do not fall under the spectrum of cannibalism when eaten by wolves.

Wolves are typically not cannibals, though wolves have been seen eating other wolves, especially when food is scarce. They won’t kill members of their own pack, but some people claim to have seen wolves eating their pack members.

Wolves are extremely loyal, demonstrating empathy for each other which generally prevents them from killing each other in the wild. However, this respect does not extend to wolves outside of their pack.

When rivaling wolf packs cross through, or threaten, the territory of another pack, they may end in a fight. This will only stop if one pack flees, or if they’re killed.

Wolves are the largest meat-eating members of the canine family [3]. In order to survive, they eat a lot of meat from their prey every day, but they will typically refrain from eating each other.

Cannibalism has been observed in some wolf packs living with higher population densities where food sources are scarce and competition between pack individuals is therefore very high.

Can a Wolf Eat a Wolf?

Technically, yes, a wolf can eat a wolf. Some cannibalism within wolves has been reported, meaning it’s not completely uncommon for wolves to eat wolves. They do typically not eat other wolves, as they prefer the fattier meat from ungulates, which also provides more nutrients.