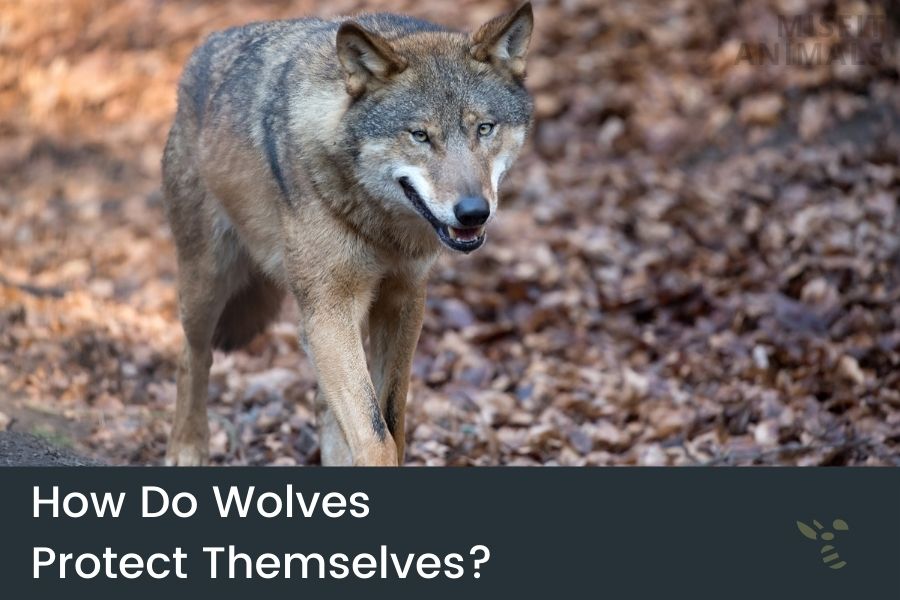 Wolves have a variety of defensive mechanisms to protect themselves. They use their pack structure to guard each other, their razor-sharp teeth and strong bite to fight off enemies, and they use their smelling and hearing senses for detecting threats.

Wolves are social animals that live in packs with alpha males and females who lead the pack.

The stronger members will often help defend the weaker ones from predators such as bears or tigers.

In addition, wolves howl together to warn the rest of the herd about intruders or dangerous situations that may pose a threat.

In this article, we’ll dive deeper into how wolves protect themselves.

Here are the ways wolves protect themselves against threats.

Wolves are social animals. By staying in a pack, they increase their survival rates manyfold.

Each wolf has a role within the group, each with more authority than the other:

As individuals, wolves aren’t as dangerous as the entire pack. There have even been recordings of humans taking down wolves 1-on-1.

Wolves have razor-sharp teeth and a powerful bite. They use these teeth to bite through the flesh and bones of their prey, or to fight off any threats.

When threatened, wolves use their strong jaws to clamp down on approaching predators or enemies. They can inflict serious wounds with a single bite.

Wolves will often bite near the should or flanks, where their teeth can sink deep into the flesh of their target.

Wolves have one of the strongest bites in comparison to how big their bodies are.

Their bite force lies around 400 PSI but can reach upwards of 1,500 PSI when they’re threatened, as adrenaline surges through their body.

They have specialized jaw muscles, as well as strong neck muscles, which helps wolves achieve this powerful bite of theirs.

Wolves use this when hunting, as they need to crush the bones of their prey.

Wolves have a great sense of smell and hearing. This helps them to find prey, as well as protect themselves from predators. Their sense of smell is about 100 times better than that of humans. [1]

Some sources claim they can smell up to 1 mile away, while others say that the number is closer to 10 miles.

Wolves are also equipped with an incredible sense of hearing. When they need to pinpoint where to sound is coming from, or if they want to increase the “volume”, they will rotate their ears.

Defensive growling is a common wolf mechanic used to warn off predators or other wolves that may cause harm to the pack members.

Wolves will also use posture and size differences between themselves and potential attackers as a way of protecting themselves.

Bigger, stronger wolves tend to scare away smaller foes, whereas small wolves usually back down against larger adversaries.

Wolves’ stamina helps them outrun predators and escape danger. Wolves can run 30-37 mph (50-60 km/h) at full sprint. If they’re running from danger, they will slow down a little, which enables them to run for miles upon miles.

They use their endurance to stay alive by running away from dangerous situations.

Wolves also take advantage of their endurance when hunting. They will often hunt down animals for many miles, exhausting their prey until it can’t run anymore.

How to Tell if a Wolf Is Defensive

Wolves are naturally defensive, but there are some signs that allow you to spot when a wolf is defensive or aggressive.

First of all, they will take a defensive and protective stance, shielding young members of their pack. They may also take an aggressive stance to let predators know, that they’re not afraid no fight.

In order to protect themselves, they will attack if necessary using their sharp teeth and strong bite that can cause serious injury or death to humans.

Wolves will when defending themselves or protecting the pact, take a defensive stance.

They will “puff up”, making themselves bigger to seem more dangerous and lethal. They use this to scare off any predators (like bears or other wolves).

The pack will also gather around the target, if possible, as this adds to the effect.

A defensive stature also involves showing teeth and looks much like aggression.

How to Tell if a Wolf Is Aggressive

The best way how to tell how the wolf will act in any given situation is through its body language.

Wolves make use of body language in most situations, whether it be showing dominance, submission, or aggression.

Apart from body language, they may also snarl and growl, erect their ears, or show their teeth.

Snarling is how wolves communicate when they feel threatened, in danger, or that they’re aggressive.

Wolves often use this as a warning before an attack. They show their teeth, letting other animals see the large and sharp teeth.

Wolves will also growl and snarl when asserting dominance over other wolves in the pack.

Snarling is also used by dominant wolves to threaten others into staying away from their territory and pack members (see Wolf Pack).

Wolves will become aggressive when threatened, or if they’re hunting. Wolf aggression includes taking an aggressive stance, ready to pounce at their target.

They stand tall with their ears up and forward while holding their tail straight out behind them horizontally.

They may also lower the front part of their body. This lets the wolf use more power from their hind legs for pouncing on their target. Wolves have powerful legs.

When wolves are hunting, they have erect ears. This allows them to heighten their sense of hearing, which is already exceptional.

When fighting, hunting, or defending themselves, wolves rely on all of their senses. They can react quickly to changes or movements, allowing them to respond accordingly.

Wolves have many ways of defending themselves, but the primary one is staying in a pack. As a pack, wolves are much stronger than individuals. Wolfpacks can take down much larger animals than themselves.

The social nature of wolves is a major advantage when it comes to hunting and general survival.

Apart from pack structure, wolves will also use their forceful bite, razor-sharp teeth, smell, and hearing to defend themselves. They can sense intruders from great distances.

Wolves also have incredible stamina, which they can use the flee from predators, or to hunt down prey.