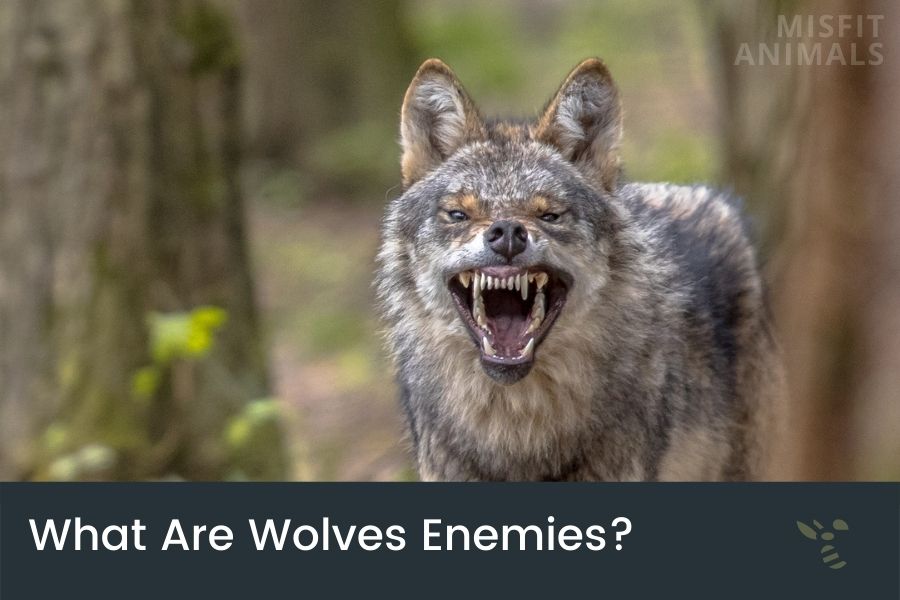 Wolves may be apex predators on top of the food chain, but they share this spot with others.

Wolves have several natural enemies out there who would love nothing more than to see these wild canines dead or injured.

In this article, we’ll go into detail about the top 11 natural enemies of wolves, as well as why they’re a danger to wolves.

The majority of wolves’ enemies are other predators. They hunt for the same animals as wolves, fight with them for territory, or compete in other areas.

These are the 11 most common natural enemies of the wolf.

Bears and wolves share the same natural habitats, meaning they often cross paths in the wild.

You can read more on the habitats of wolves and bears and WWF. [1] [2]

They also eat many of the same animals, resulting in competition for prey.

Bears are very strong animals that have sharp claws and teeth, much like wolves. However, they are much larger than wolves, almost the size of a car. They can be found in cold regions all over the world.

Wolves usually avoid bears due to their large size and strength. If they do encounter one another though, they can end up fighting it out.

Now, when it comes to who’d win in a fight, it very much depends on how many wolves are present. An entire pack of wolves can take down a bear, but if it’s merely one wolf, a bear would easily kill it.

Wolves will actively hunt for bear cubs, which is when encounters between these two animals happen the most.

The habitats of mountain lions and wolves overlap several places. When they stumble across each other, whether it be to defend their territory, or to show dominance, it often results in death.

Interestingly, both animals can take down the other.

A study shows, that wolves’ have a great impact on the population of mountain lions. A greater impact than that of humans hunting them.

The decreasing population of mountain lions is caused by wolves starving out adults and hunting their kittens.

These two species tend to be enemies because mountain lions’ prey consists mainly of deer, the same as wolves.

The Siberian tiger is the largest of all tigers in the world. They live in Southeast Asia, where wolves are just as common.

The Amur tiger is extremely dangerous, known for its hunting capabilities.

This paints a clear image of how these tigers are capable of hunting wolves.

Wolves avoid amur tigers because they would be no match for these powerful tigers.

These big cats live in the same regions as wolves and prey on deer or other medium-sized animals.

Wolves avoid these predators because they can climb trees which is an advantage not available to wolves. Leopards also have very sharp teeth and claws, similar to what we mentioned earlier about bears.

Coyotes and wolves are relatives within the Canidae family. They can even create offspring, the so-called “Coywolf”.

Experts estimate that almost all gray wolves in the U.S. contain some form of coyote DNA.

One of the main differences between the two, is that wolves live far away from people, deep in forests, while coyotes will stay close to down to scavenge.

When crossing paths, wolves and coyotes can see each other as enemies, most often resulting in the death of coyotes.

Bobcats live in Canada and the Northern U.S., which is also the habitat for wolves. Bobcats are also called “the red lynx”, and have a complicated relationship with the wolf.

These large cats can pose a threat to wolves but are also threatened by the wolf themselves.

Wolfpacks will drive away bobcats, causing loss of territory and habitat.

Red foxes are much smaller than wolves, yet they are still seen as threats.

There are two reasons why wolves see foxes as enemies:

Both of these animals are part of the Canidae family (canines), yet don’t get along.

If the two encounter each other, the red fox will run, as it’s no match for a wolf. While the fox is agile and fast, it’s much smaller, and way less powerful in terms of strength and bite force.

Related: What Is a Fox?

Golden eagles are large birds of prey. They have sharp talons and beaks that they use to attack. On a few occasions, they’ve been recorded preying on old wolves or young pups.

Golden eagles also eat carcasses which can cause some competition between these two species.

Both wolves and golden eagles might grab food left behind by other animals, or from animals who’ve died by natural causes.

Wolverines and wolves look similar, with similar size and strength. The wolverine is the biggest member of the weasel family but is often mistaken for a bear.

Wolverines are known for their aggressive behavior.

There have been recordings of wolverines killing bears, which tells us a little about how dangerous they really are.

Wolverines may prey on wolf cubs, and will even prey on animals larger than themselves. They also hunt for smaller animals, causing the wolf to see them as an enemy.

Wolves are very protective of their pack and territory. When other wolves invade their territory or threaten the pack, it can lead to a lot of aggressive behavior.

Wolves will often battle it out when competing for territory and food. When the losing wolf pack is killed, they may even be eaten by the winner.

The biggest predator of wolves is humans. Humans actively hunt wolves, but we also alter their habitat. We invade their territory, build cities and drive out the wolves.

By cutting down their habitats, forests, we’ve greatly decreased the world’s wolf population.

Wolves tend to stay away from humans, as they know we’re a threat to them.

While wolves are at the top of the food chain, they share this spot with other apex predators. Wolves have several natural enemies, including bears, tigers, coyotes, mountain lions, and more.

Wolves often see other animals as an enemy because they invade their territory, or they’re competing for food sources. This can trigger an aggressive response from wolves.

Are Tigers and Wolves Enemies?

What Are Wolf Afraid Of?

Wolves are afraid of humans, and other natural enemies. They tend to stay away from predators who pose a serious threat to them. Humans are the biggest predators of wolves, hence they avoid us as much as possible. They’re also afraid of fire.