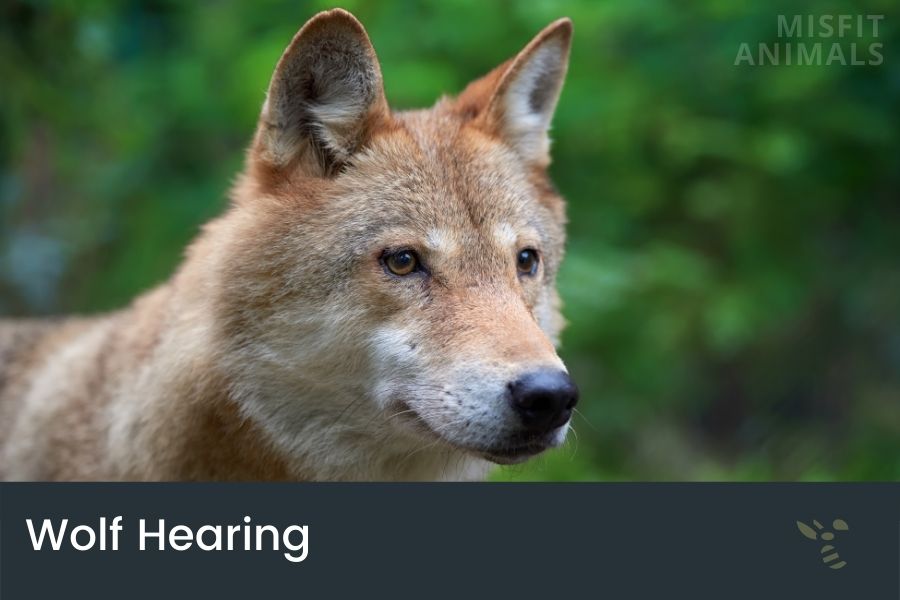 Wolves do have exceptional hearing, and they use it in a variety of ways. They rely mostly on their sense of hearing, as well as smelling, in their daily lives.

They use their incredible sense of hearing for hunting, to avoid predators, as well as communicate.

In this article, we’ll dive deeper into wolves’ sense of hearing, as well as how they use this to their advantage.

Do Wolves Have Good Hearing?

Wolves do have excellent hearing. Their sense of hearing is so strong that they can hear sounds from over six miles away in forests, and 10 miles away on open planes.

They use their ears to listen for prey and other animals in the area, as well as danger such as predators or hunters.

How Good Are Wolves Hearing?

Wolves have one of the best senses of hearing among wild animals. Their ears can hear frequencies up to 80,000 Hz (80kHz), much better than the human upper limit of 20,000 Hz. This allows them to pick up on sounds that humans can’t even notice.

What Frequencies Can Wolves Hear?

How Much Better Can a Wolf Hear Than a Human?

Wolves’ upper limit is about 350% higher (3,5 times better) than that of humans, while their lower limit is 30% lower.

How Do Wolves Use Their Sense of Hearing?

Wolves’ sense of hearing is a very powerful tool that they use for various tasks, such as:

Wolves don’t have the best eyesight, so they have to rely on their other senses (hearing and smelling primarily).

When hunting, wolves will use all of their senses: hearing, sight, and smell particularly.

While wolves have great night vision, their vision starts to get blurry after 75 feet. When tracking a prey that’s farther away, they’ll rely more heavily on the other two senses: hearing and smell.

They can hear noises up to 10 miles away if there are no obstacles or objects in the way. That’s one of the reasons why wolves are such great hunters.

Communicating With Each Other

Different ways to vocalize mean different things. This can be used to assert dominance or to show that they’re submissive.

Because of wolves’ great hearing, they can easily differentiate the different forms of vocalization and hence respond accordingly.

Using their hearing, they’re able to pinpoint the location of the howl.

Wolves will also howl in different ways, in order to pass off different messages, from using a slow rising howl to sudden drops in tone.

Why Are Wolves Ears Pointy?

Wolves’ sharp-pointed ears are generally held erect and oriented forward; this enhances sound detection as well as helps to locate where sounds originate from.

This trait has been passed on to some domestic dog species, but many dogs have developed floppy ears.

Related: Why do wolves have pointy ears?

Wolves Can Turn Their Ears to Locate Sounds

Wolves do a good job of locating sounds, a skill that is especially useful in combination with their sharp sense of smell. A wolf can turn its ears to triangulate the location of where a sound is coming from and then use other senses to pinpoint exactly what it was.

Other Senses & Forms of Communication

Wolves do not only use hearing to communicate. They also have excellent night vision and smell.

Wolves don’t rely on a single sense. They utilize all of their senses when communicating with other wolves in the pack or trying to detect potential threats nearby.

The sense of smell is a powerful tool for wolves.

Smell plays a crucial role, as it helps them track prey or determine if another wolf is part of the pack, as well as if there’s a potential threat in the area.

The wolves do not rely solely on smell because they do have such great hearing and vision so using all senses together makes them more effective hunters and communicators.

They have special scent glands near their tails, which let off a unique scent. This scent works as an identifier for each wolf.

Scent marking is not restricted to the alpha but is done by all wolves in the pack.

These scent markers contain pheromones and can be detected by an animal even if they do not see where the mark is made.

This is a trait that’s been passed on to both foxes and domestic wolves, both of which are descendants of the wolf. [4]

Wolves will urinate on themselves, objects around them, or other animals to mark their territory. They do this by leaving behind a scent from their urine. This works as another way of scent marking.

Wolves will also scratch the ground to mark their territory, often combined with scent marking or urinating.

Wolves don’t have very remarkable sight during the day, but as soon as the sun sets, wolves’ night vision kicks in.

Due to a reflective layer in wolves’ eyes called the Tapetum Lucidum, they can see exceptionally well during the dark hours of the day.

This layer works by reflecting light back through the eye, enhancing the light the eye is exposed to. Hence, even with very little light, wolves can see very well.

Wolves can’t see very far though, as their sight starts to get blurry about 75 feet out. Hence, they rely less on their eyesight than their hearing.

Related: Do Wolves Have Night Vision?

Wolves do have taste buds. This helps them taste food, and also helps them figure out what meat they like.

It’s believed that wolves’ taste buds work similarly to dogs, meaning they have a taste for meat. Wolves will eat plant material if no prey is present, but they prefer to hunt for ungulates.

Wolves do have an excellent sense of hearing but do not rely solely on this sense. While they do use it for both hunting, communication, and tracking, they combine this sense with their smell and sight.

They can hear frequencies in the range of 45 Hz to 80,000 Hz, which is much better than humans, and slightly better than dogs as well.

Wolves have pointy ears, which they can turn to enhance their sense of hearing.