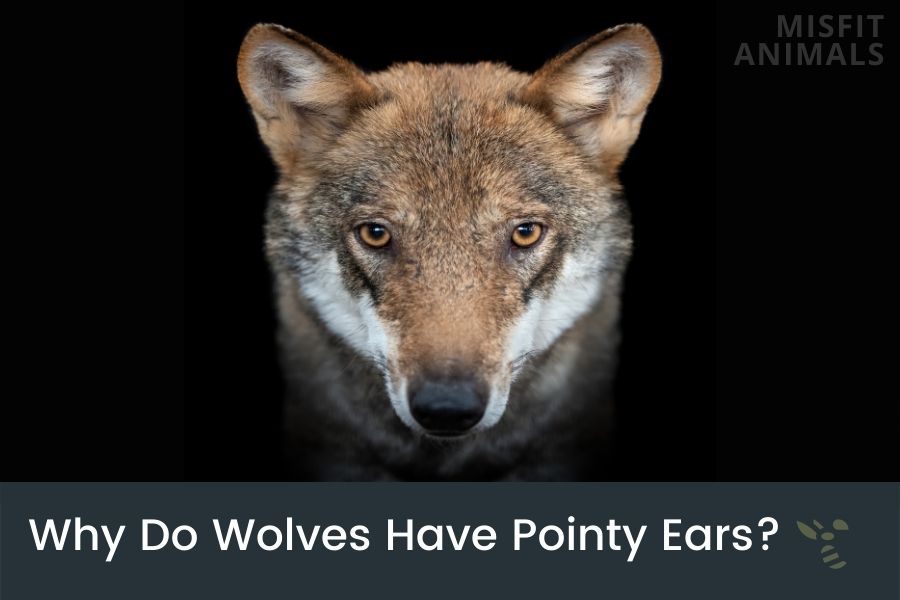 Wolves have pointy ears because it enhances their hearing. Having pointy ears help wolves hear prey, communicate with other pack members, and even identify potential dangers.

Wolves rely greatly on their sense of hearing.

They use their ears to hunt for prey and can pinpoint the location of a sound source in three dimensions.

The evolution of the pointy ear can be traced back to ancient times when most mammals had pointed or erect ear tips.

In this article, we’ll dive deeper into wolves’ remarkable ears.

Yes, wolves’ ears are pointy. Wolves evolved their pointed ears for hunting purposes. They are carnivores and primarily eat large mammals like elk or deer.

Wolves have pointy ears because they are effective for hunting. When hunting, wolves need to hear to localize prey.

Since their eyesight isn’t the best, they rely more on hearing and smell.

The ability to sense where potential prey is located allows wolves to take down more prey easier. This also helps them time their attack properly.

Do Wolves Ever Have Floppy Ears?

No, wolves don’t have floppy ears like domestic dogs. Dogs developed floppy ears due to a change in bone structure when they were domesticated. They no longer needed the pointy ears. [1]

Why Wolves Don’t Have Floppy Ears

Floppy ears are seen in dogs, and dogs are descendants of wolves. Wolves never changed, but because of domestication, dogs developed floppy ears.

Hence, wild wolves don’t have floppy ears, because they were never domesticated.

Why Did Wolves Retain Pointy Ears?

Wolves use their pointy ears to help with hunting and enhance hearing. The floppy ears we see in dogs are an effect of domestication syndrome.

What Do Wolves Use Pointy Ears For?

One reason why wolves have pointy ears is to help them hear better in wild environments. When they are chasing down prey or hiding from predators, such as bears or mountain lions, they need to be able to hear what’s going on.

This has been crucial to the survival of wolves because it gives them an advantage when hunting.

When wolves want to listen for something, they can “erect” the ears, as well as turn them, to triangulate where the sound is coming from. This helps them pinpoint the location of the sound.

How Large Are Wolf’s Ears?

The average wolf ear length is between 12 and 20 centimeters, however, they can range from being as small as five centimeters up to 27 centimeters long.

Wolves have smaller ears in relation to their body when compared with dogs, coyotes, and foxes. [2]

What Happens When You Touch Wolf’s Ears?

Wolves have sensitive ears when it comes to hearing. There hasn’t been done a lot of research about the feeling of their ears or physical sensitivity.

Getting close to a wolf isn’t recommended. If you were to somehow be close to a wolf, and you had the possibility to touch their ears, they’d most likely turn them away.

Where Did Floppy Ears Come From?

Darwin made a remark on this:

“Not a single domestic animal can be named which has not in some country drooping ears”.

Hence, the floppy, or drooping, ears we see in cats, dogs, pigs, or rabbits, is a result of humans domesticating these animals. It’s not a natural evolution, but a man-made one.

A Russian experiment on fox domestication, where silver foxes were bred for domestication, showed similar findings. After six generations, domestication syndrome appeared. They noticed, that some of the foxes started developing floppy ears.

Why Some Dogs Have Pointy Ears

Some researchers suggest that adrenaline has something to do with pointy ears.

In a study led by Adam Wilkins of the Institute of Theoretical Biology in Berlin, they explain how floppy ears can be a result of a lack of adrenalin. The adrenal gland is formed by neural crest cells.

These cells move differently in animals with pointy and floppy ears.

The study suggests, that if these neural crest cells don’t reach an animal’s ears, they will become floppy, as a result of a lack of adrenalin.

The same theory can be used to explain big or small teeth. If the cells don’t reach the jaw or mouth or are weak when they reach the jaw and mouth, the teeth may grow smaller.

Why Some Dogs Have Floppy Ears

The most common type of ear that you will find on a dog is the floppy ear style. As stated, this is a result of domestication.

When animals are domesticated, they won’t produce as much adrenalin. They’re not in as much danger, as they’re cared for by humans. Hence, the neural crest cells won’t reach the ears, and they become floppy.

Wolves have pointy ears to help them with their hunting. They can hear prey better. Wolves can also turn their pointy ears, enhancing the sound from a specific direction.

When dogs were domesticated, they developed floppy ears, as a result of a lack of adrenalin. Since less adrenalin was produced, it didn’t reach the ears, resulting in floppy, or dropping, ears.

Can Wolves Have Floppy Ears?

Wolves can, in theory, develop floppy ears, but the vast majority of wolves have pointy ears. This is a trait that helps them survive and hunt better.

Do Wolves Have Rounded Ears?

Wolves do have somewhat rounded ears, contrary to foxes and coyotes who have much more pointy ears. This is simply a trait they’ve developed over time. The shape of the ear doesn’t affect their hearing much, as their hearing is still very good.

Even though wolves have rounded ears, they’re still “stiff”, meaning, they stand tall on their heads. This, contrary to the shape, has a big effect on how they hear.