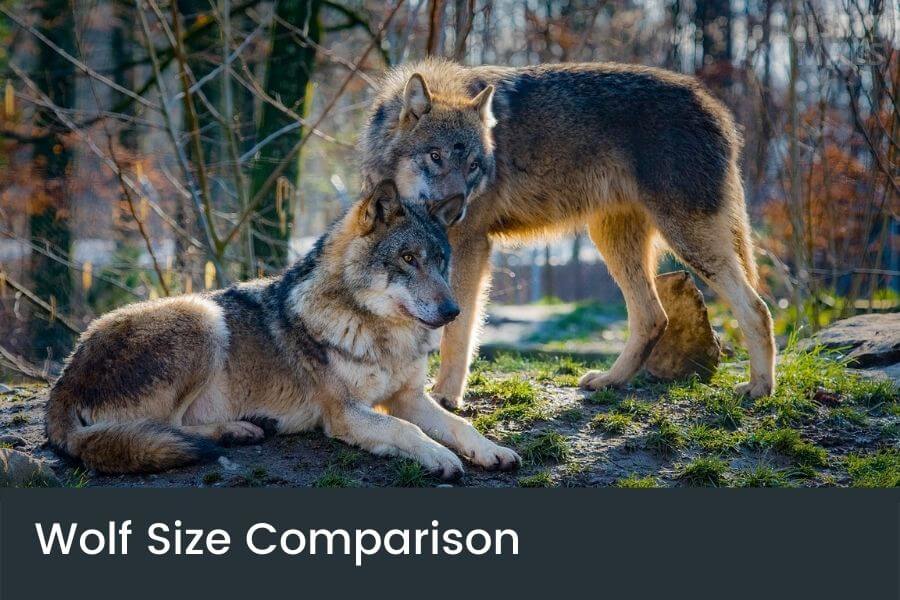 Some people believe that wolves are very big creatures, a myth that most likely comes from the movies of the Twighlight Saga.

However, they’re not small either.

So just how big are they? And how do they compare to humans and other animals?

That’s what we’ll discuss in this article.

How Big Are Wolves?

Wolves are the largest of the canines, and they come in a variety of sizes. The gray wolf, which is the most common species, typically weighs between 80-100 pounds but can get as big as 175 pounds. They measure about 30 inches tall at the shoulder.

Adult male wolves are about 5 to 6.5 feet long, while female wolves measure about 4.5 to 6 feet in length.

This does depend on species though, as the red wolf, as an example, is smaller than the grey wolf.

What Is the Biggest Wolf Species?

The biggest wolf species is the Northwestern Wolf (Mackenzie Valley Wolf). These wolves are primarily found in Canada and Alaska and weigh between 105 to 130 pounds (74 to 58 kg). They stand tall at about 27 to 36 inches.

What Is the Smallest Wolf Species?

The smallest wolf species is the Arabian wolf. They average about 45 pounds and are 25–26 inches (64–66 cm) tall at shoulder height. That’s only about half as big as the Northwestern wolf (in terms of weight).

They live in smaller groups and hunt for small and mid-sized prey.

Wolves and humans are very alike in size, though wolves are generally smaller than the average man.

These are the averages, and there are cases where wolves are bigger than the average human.

It may also surprise most people, that humans have been observed taking on wolves in one-to-one combat, barehanded even.

Some people think of wolves like dogs, while others think of them as these big, ferocious predators.

The Great Dane and wolves are very similar in size. They both grow to be 33 inches tall, but the great Dane weighs a bit more on average, beating the wolf with about 20 pounds at least. This large dog breed can even grow to weigh 200 pounds.

All in all, the Great Dane beats the wolf in size.

Wolfdogs are crossbreeds between dogs and wolves. Hence, it makes sense why most wolfdogs are about the size of a regular wolf.

However, the size of a wolfdog very much depends on what dog breed was used for breeding. If it’s a smaller dog, the wolfdog may be significantly smaller than a wolf. If it was a larger dog, then it may grow even bigger than a regular wolf.

Huskies are one of the dogs breeds closest to wolves in terms of DNA and looks. However, they’ve evolved to be significantly smaller than wolves.

Where wolves typically weigh about 80 to 100 pounds, huskies only weigh about half of that, about 36 to 60 pounds. They’re also shorter in height, measuring 19 to 23 inches from their paws to their shoulders, whereas wolves stand tall at 26 to 33 inches.

Compared to domesticated dogs like German Shepherds, wolves are quite a bit bigger. German Shepherds weigh anywhere from 48 to 88 lbs pounds and stand about 22-26 inches tall at the shoulder. The smallest gray wolves typically grow to be 26 inches tall, outgrowing the german shepherd.

The Rottweiler is a large dog, measuring in at 77 to 130 lbs and 22 to 27 inches. In terms of height, they’re beaten by wolves, but when it comes to weight, the two animals are very alike. Some Rottweilers are bigger than wolves though.

Wolves and coyotes are both in the Canidae family, which means they’re related. They look similar but there’s a big difference between their sizes. Wolves are generally bigger than coyotes.

Wolves also stand taller as they reach about 30 inches tall (76cm) while a coyote is about 23 inches high (59 cm).

There are however very small wolves, which are about the same size as coyotes.

The dire wolf was the largest in North America. While they died out during the last ice age about 12,000 years ago, they were very big animals. Some believe they were bigger than the wolves we know today, while others suggest they were smaller.

These measurements are very alike the common gray wolf.

Foxes tend to be taller than they are wide. They’re very slender animals, and their shoulder height averages 13 to 20 inches. This is still much less than wolves, which are about 26 to 33 inches tall.

Wolves and foxes are related, as both are members of the Canidae family. There’s some discussion about when foxes came to be, but some sources suggest it was 9 million years ago, while others claim it was 1.8 to 3.5 million years ago. [1]

Tigers are generally bigger than wolves, weighing significantly more and standing some inches taller. Tigers are also known to prey on wolves in habitats where both live.

All in all, tigers are definitely larger animals than wolves.

Wolves also stand much shorter than lions, typically measuring in at just 30 inches tall at the shoulder, compared to a lion’s height of 40 to 48 inches.

Despite their relatively small size when compared to other predators like lions and tigers, wolves are still incredibly powerful animals whose bite force is among the strongest of any land mammal.

In terms of sheer size, however, there is no doubt that lions reign supreme as the king of the jungle. With males growing up to weigh over 400 pounds and standing nearly four feet tall at the shoulder, they are easily one of the largest cats on the planet.

While wolves may not be as large as lions, they are still one of the largest predators in North America and should never be underestimated.

Their keen intelligence, powerful jaws, and pack hunting tactics make them a force to be reckoned with for any prey animal that dares cross their path.