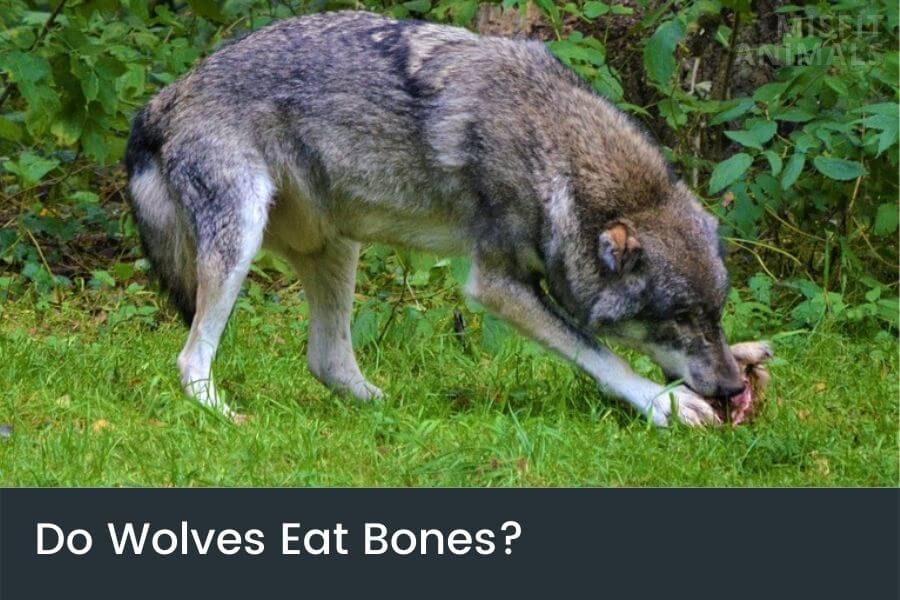 Yes, wolves do eat the bones from their prey, if they’re small enough. While wolves have very sharp teeth, and a powerful bite, they can’t chew through all bones.

Wolves are carnivores and predators. They feed on the flesh of the animals they hunt. Sometimes, they also eat their bones.

The larger bones are too hard for a wolf’s teeth and digestive system to break down.

Wolves do eat the smaller bones from their prey because they can be easily chewed and digested.

In this article, we’ll talk about why wolves do this if it’s really bad for them, and how they’re able to crush bones.

Yes, wolves do eat the bones of smaller animals. Animals such as rabbits have small enough bones, that wolves can easily break them with their teeth and process them in their intestines.

One study found that wolves eat the entire carcass of rabbits, including the skull, ribs, and all other bones. Wolves will grind the bones of the rabbit with their teeth, which enables their digestive system to properly process everything.

What Do Wolves Eat?

Wolves primarily eat meat and organs from ungulates, but will also eat smaller animals, fish, insects, and even dead animals. Depending on the size of the animal, they may also eat their bones.

While wolves have very powerful jaws and extremely sharp teeth, they are limited when it comes to bones.

As wolves prey primarily on larger animals, if available in their territory, they’ll typically leave the carcass of the animal behind.

They will consume smaller bones quite easily, as their teeth and digestion system are able to break them down. However, they do not typically eat the larger bones, as they are unable to be processed properly.

Studies show that wolves can eat up to 20 pounds of meat in a single meal. Hence, it makes sense why they prefer larger animals.

Why Do Wolves Eat Bones?

Wolves eat the bones of their prey because of the nutrients that can be found in them. Much like dogs, wolves will eat almost anything, as long as it contains nutrients.

They consume the meat, organs, and blood of their prey first, and then they will gnaw on the bones to extract any nutrients that are still present.

Interestingly, wolves don’t just eat the bones of their own prey. They’ll also scavenge for animal carcasses that have been left by other predators or animals. This provides them with a valuable source of nutrition that they wouldn’t otherwise get.

Wolves do not eat the bones of every animal that they kill. For example, when wolves hunt down an elk or bison, they will only eat the meaty parts of their prey. The rest is left behind for other animals to scavenge upon later on.

Are Bones Bad or Healthy for Wolves?

Bones are healthy for wolves. They provide nutrients and are healthy for their teeth. However, if they don’t process the bones correctly, it can be dangerous, even fatal.

As with dogs, wolves use their teeth a lot. When chewing bones, helps take care of their teeth. Bones are also full of nutrients, such as phosphorus and calcium.

However, they can be dangerous to consume.

Bones are very sharp and pointy and can pose a serious health risk if consumed wrongly. If wolves fail to crush them properly or swallow a bone that’s too big, it may get stuck in their throat, or even cause an internal puncture.

This can, in extreme cases, lead to death.

Animal bones contain an abundance of healthy nutrients, both for canines and humans.

Bones are composed of two-thirds calcium phosphate, which split up is calcium and phosphorus. This is especially important when wolves are growing. This is the primary nutritional value found in bones.

Bones do also contain a protein called collagen, which is poorly digested by cats and dogs. [2]

While bones do also contain some bone marrow, this is not the reason why wolves eat bones. Bone marrow makes up a small portion of the bone, to a point where its nutrients are insignificant.

In general, wolves prefer to eat muscle tissue and organs over other body parts. The majority of wolves’ diet is made up of protein, which is not found in bones.

Organs and muscle tissue also provide vitamins and other nutrients, which are essential to wolves.

How Do Wolves Eat Bones?

Wolves eat bones by using their strong jaw and sharp teeth. Wolves have a bite that measures about 405 PSI. They use this force to chew through bones, making sure that it’s finely ground so that it doesn’t pose a health risk.

Combined with their strong jaw muscles, wolves have very sharp teeth. These are used to both tear flesh off of the bones, but also to grind the bones before ingesting them.

Can Wolves Bite Through Bone?

Wolves can bite through some bones, but not all.

Smaller animals have smaller bones, which are much easier to bite through. Larger animals, such as elk, moose, or bison, have very large bones, especially the ones in their legs. Wolves can’t bite through these and will leave them behind.

Can a Wolf Bite Through a Human Femur?

Wolves can indeed bite through a human femur. While it may take a couple of tries, wolves are known to break the bones of both moose and elk, both animals with much larger bones than humans.

The human femur can withstand the pressure of about 4,000 newtons. That is roughly translated into 900 PSI. Wolves’ average bite force is about 405 PSI, while that can jump up to 1,200 if they’re threatened or otherwise in danger.

In other ways, yes, wolves can break a human femur, though it can take a few tries.

Wolves do eat the bones from their prey, but only if they’re small enough to be ground up and digested. Wolves use their strong jaws and sharp teeth to grind bones before ingesting them, which prevents them from choking on them.

Wolves, like dogs, do need a smaller amount of calcium and phosphorus in order to keep their bones and teeth strong, but it’s only a small part of their diet. They prefer to eat meat or organs from their prey.

The larger bones found in moose or elk cannot be processed by a wolf’s teeth and digestion system, so they leave these behind. However, when wolves prey on a smaller animals, such as rabbits, they eat the entire carcass, from skull to feet.