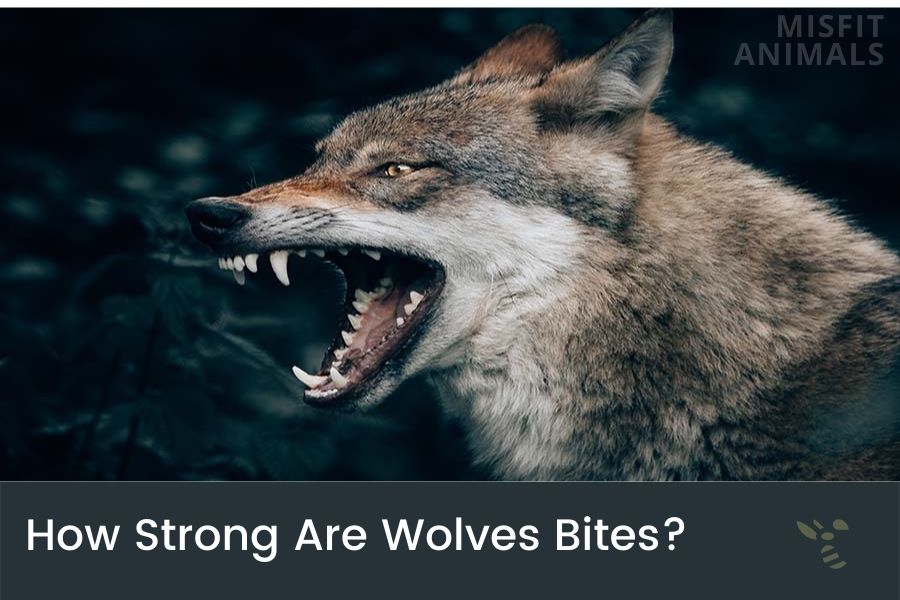 Wolves have a bite force of approximately 405 PSI, but they can reach upwards of 1500 if in danger. Most wolf bites will be between 400-600 PSI.

When wolves attack their prey, they’ll usually bite the shoulders and flanks. They’ll use their crushing bite to injure large animals until they’re weak enough to be killed.

When it comes to smaller prey, they’ll bite and shake them to break their neck.

Read more about how wolves bite, when they use it, and why their bites are so strong.

What Is a Wolf’s, Bite Force?

Wolves have a bite force of approximately 405 PSI, which is much stronger than both coyotes and dogs. However, wolves can reach upwards of 1500 when they’re threatened, as adrenaline surges through their body.

This was tested by National Geographic:

Now, this is only one recording. Other recordings have previously shown bites even stronger, upwards of 600 pounds. It’s important to note, that these recordings were made while the wolf wasn’t stressed or threatened.

Dogs with strong jaws will bite with around 300 PSI of force, measuring about 25% less than the wolf.

When animals get their teeth around smaller prey, they will break the animal’s neck or back shaking it vigorously.

Wolves are hunters, using their forceful bites to injure large animals to the point where they’re too weak to defend themselves. Sometimes their prey dies from exhaustion or blood loss.

Why Are Wolves Bites So Strong?

Wolves are known to have one of the most powerful bites in nature. They’re carnivores, meaning they eat animals. They need a powerful bite to bite through the flesh and bone of their prey.

Wolves’ sharp teeth and strong jaw muscles have evolved to enable the wolf to easily bite through the body of their prey.

The structure of a wolf’s jar also makes a difference. Their specialized jaw muscles are incredibly strong, and their lower jaw is less rigid than what we see in other animals.

This allows the wolf to apply extra force with its lower jaw.

Related: How Do Wolves Hunt?

Does a Wolf Have a Stronger Bite Than a Dog?

Yes, wolves have a stronger bite than dogs. There are several reasons for this.

What Is the Strongest Bite Force of a Wolf?

The strongest bite force of a wolf is estimated to be between 1,500 PSI and 1,800 PSI, but this hasn’t been recorded yet.

A wolf can also use its muscles and sharp teeth to rip through flesh with ease. This makes a wolf’s bite its most dangerous tool.

Which Dog Has the Highest Bite Force?

Dogs can’t, typically, bite with as much force as a wolf, though some dogs have remarkable bites.

The top 5 dogs, in terms of bite force, are:

These are the strongest bites recorded by the species. Compared to the wolf at around 660 PSI (strongest ever recorded), they’re not close, yet still impressive.

How Damaging Is a Wolf Bite?

The wolf has one of the most powerful bites in the animal kingdom and is stronger than any dog. Their strong jaws pose a serious threat to their prey.

Wolf bites are extremely damaging because their jaws are designed for ripping and tearing flesh.

A wolf will generally target the shoulder or flanks when attacking prey, as they aim to tire out their prey.

While wolves generally don’t attack humans, Injuries from wolf bites would be severe or even life-threatening.

An individual attacked by wolves would require stitches, and most likely surgery on top of that (depending on how deep lacerations were sustained by the wolf bite).

Wolf bites can also lead to wolf rabies, a disease that is transferred from animals to humans through saliva and affects the brain and spinal cord.

If left untreated wolf rabies will almost always result in death within ten days of contracting it. There are few reported cases where people with wolf rabies have survived after 10 days without medical intervention. [1]

Can Wolves Bite Through Bone?

Wolves can easily bite through bone. As they’re carnivores, they need to be able to bite through flesh and bone when hunting.

When hunting smaller prey, they may even break the neck of the animal with its crushing bite.

A wolf’s teeth are longer than those of other animals such as dogs because they need them for their hunting style. Wolves also have large molars in the back part of their mouth which helps with chewing and tearing off meat from their prey.

While wolves have an incredible bite force, they’re not as strong physically as you may think.

The strength of wolves comes with the pack. While a pack of wolves can take down almost any animal they encounter (assuming there are enough wolves), single wolves aren’t very strong.

There have been several cases of humans besting wolves in a 1-on-1 fight, bare-handed.

One example is a man from Kazakhstan, who killed a wolf with his bare hands.

Now, this is a general description, and may not count for all wolves or people. Some wolves are much stronger than others, and the same goes for people.

A human would most likely struggle against a large gray wolf.

One major advantage wolves have over other animals is their stamina. They can run for extended periods of time. They use this ability to exhaust their prey, having an animal run until it has exhausted itself.

When wolf teeth are compared to the bite force of crocodiles, wolf bites come in second place.

Crocodiles have the strongest bite in the entire animal kingdom, famous for their “death roll”, where they bite down on an animal, rolling to break their bones.

Some people claim the great white shark has an even stronger bite at 4,000 PSI, while others claim that the crocodile is on top.

Wolves have a remarkable bite force with an average of around 400 PSI. When threatened, it’s estimated to be able to reach upwards of 1,500 PSI.

Wolves are carnivores, which means they eat meat. Because of this, they’ve adapted and evolved an incredible bite, with sharp teeth, that can tear through the bone and flesh of their prey.

They have specialized jaw muscles, used for biting. Combined with strong neck muscles, and their many sharp teeth, they can easily bite through animals.