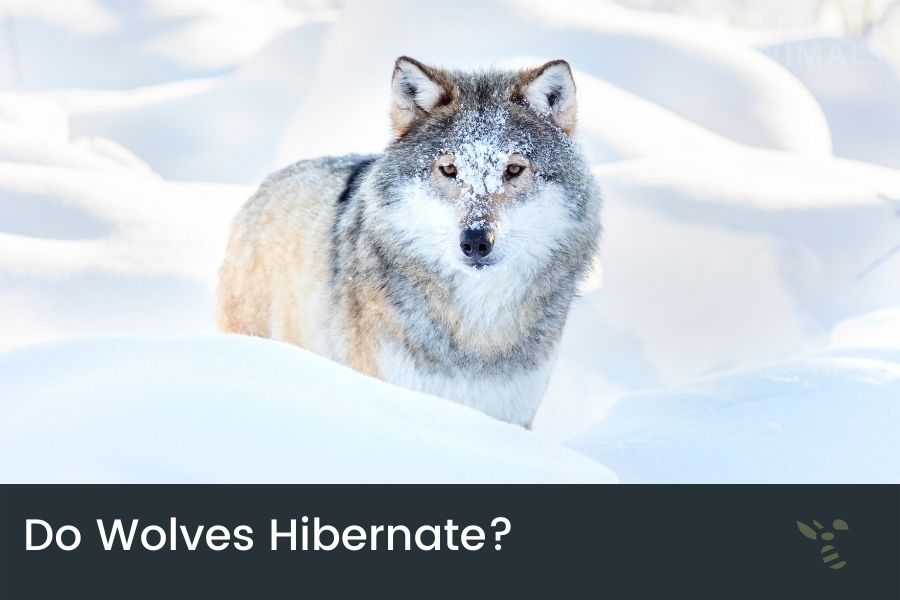 Wolves don’t hibernate. Instead, they stay active all throughout winter, hunting, and resting. Wolves typically don’t migrate either but may do so to follow their prey.

To stay warm, they make use of their big fur coats and specist footpads on their feed. At night, they curl up, using their tail for warmth.

In this article, we’ll talk more about wolves and their wintertime behavior.

Wolves do not hibernate. They remain active during winter and may do sleep more than usual, but this does not mean they hibernate.

Wolves don’t enter a state of lethargy or deep slumber like many animals do when the cold months come around.

Instead, their increased need for rest is due to staying warm being crucial during these times, since there are fewer hours of daylight too.

To stay warm through all four seasons (spring-autumn), wolves make use of their big fur coats along with two thick layers used throughout each season.

What Do Wolves Do in Winter?

Instead of hibernating, wolves do what they do best: hunt. Wolves prey on elk and deer when these animals are at their weakest during winter.

Wolves also spend a great deal of time resting during the winter. The cold doesn’t bother them because their thick coats keep them warm while hunting in the snowdrifts.

Wolves are known for their hunting capabilities, and they keep up hunting throughout the entire year. They don’t need to hibernate, but will instead spend time hunting as usual.

When wolves hunt, they prefer to target bigger mammals, ungulates, such as elk, moose, deer, and similar prey.

Wolves do a lot of resting and sleeping. In the winter months, their body slows down to conserve energy.

When wolves sleep during the winter, they curl up into a ball, while covering themselves with their tail. This conserves body heat, making sure they don’t waste any heat. It also contains warm air exhaled through their noses.

Wolves are also known to sleep in groups, curled up next to each other. This is again done to stay warm.

Related: How do wolves sleep?

Wolves may migrate if their prey migrates as well.

Most often, wolves don’t need to migrate, as their prey won’t do so either. Wolves can live in both warm and cold climates, hence they follow the food.

If their prey decides to head south for the winter, so will they.

How Do Wolves Not Freeze?

Wolves don’t freeze due to their large coat. During the winter, wolves grow a second layer of fur, resulting in a dense outer layer, and a shorter inner layer. This way, they can withstand incredibly cold temperatures.

Wolves also have several techniques they use while sleeping, as well as special footpads to avoid getting cold feet.

Wolves Have Big Coats of Fur

Wolves change the thickness of their fur depending on the season. As the weather gets harsher, and the temperature drop towards the winter, wolves will begin to grow a second layer of fur.

This way, they have a thick outer layer, as well as a thinner inner layer, which results in incredible temperature tolerance.

A dangerous parasite, mange, for wolves may cause casualties during the winter months. Studies suggest that mange can increase heat loss up to 78% in the infected wolves.

Wolves Use Their Tails for Warmth

In order to keep from losing too much body heat during the coldest parts of winter, the nights, a wolf’s tail is very important.

Wolves can use their tail as an extra blanket at night. This keeps them warm by acting as another layer of insulation.

The tail will also reach up the wolves’ noses, covering them completely.

This is not a coincidence. Most animals lose a lot of body heat through exhalation at night, but not wolves. Instead, wolves capitalize on their exhalation, by covering their nose with their tails, effectively rerouting the heat to their body.

Wolves will, in addition to this tail-trick, cuddle up next to each other. They keep each other warm with their body heat, again reducing heat loss.

To avoid frostbites on their feed, wolves have special footpads that protect them from the snow and ice.

These pads also help to grip slippery surfaces such as icicles and frozen ponds.  This allows for extra traction while running at high speeds after a deer or other animals.

Wolves rely on their ability to hunt, which is why their added mobility during the winter months is important.

Wolves’ feet are also covered with fur. Their paw pads can keep wolves’ feet warm enough to survive frigid winters in places (such as Alaska) where temperatures can reach -60°F (-51°C).

Wolves can tolerate a variety of temperatures without dying, making them well-suited for colder and warmer climates. In fact, wolves have even been known to live in areas with very cold winters and hot summers.

By contrast, many other animals cannot tolerate these types of temperature fluctuations and would die if they were exposed to them.

This makes wolves an adaptable species that can thrive in a variety of habitats.

What Do Wolves Eat In the Winter?

Wolves are opportunistic predators that will eat whatever is available to them. In the winter, they may hunt animals such as:

Wolves prefer eating ungulates, which are hoofed animals. However, they will also eat other prey if it is available.

Wolves depend heavily on hunting large prey like elk and moose because these animals have big enough bodies to supply lots of energy and nutrients (protein and fat).

For example, in Yellowstone National Park, wolves have been known to eat beaver and coyotes.

In the winter, when food is scarce, wolves may travel long distances to find a meal. They may also resort to eating cached food or digging through the snow for buried prey.

Wolves may be inclined to kill their prey faster in the winter, in order to avoid a prolonged hunt. They do so to avoid wasting valuable energy.

Wolves do not hibernate during the wintertime, they stay active all year round, hunting for food (ungulates and small mammals), or resting.

To stay warm in cold weather, wolves have two layers of fur, one thick outer layer, and one thinner inner layer. Wolves also use their tail as a blanket, effectively increasing insulation. With these techniques, wolves can survive temperatures as low as -70°F (-55°C).

Lastly, to stay warm while sleeping, wolves will sleep in groups, capitalizing on each other’s body heat to reduce heat loss.