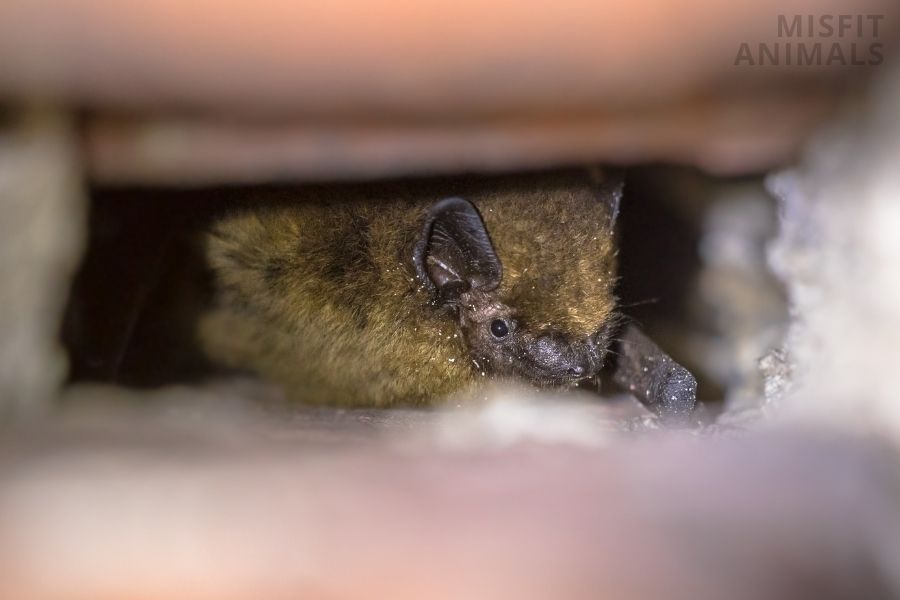 When the leaves change color and fall from the trees, the weather gets colder, and animals start preparing for winter. Some forage, while others hibernate.

You’re probably familiar with some animals that hibernate in the winter, such as bears and raccoons. But you may not know all the different types of animals that take this approach to surviving the cold months.

In this article, we’ll introduce you to 12 interesting animals that hibernate in winter.

Hibernation is a process that some animals undergo to survive the winter months. During hibernation, an animal’s body temperature and metabolism drop significantly, allowing them to conserve energy.

Here are a few animals that hibernate to survive the winter:

The fat-tailed dwarf lemur (Cheirogaleus medius) is a small lemur found in the forests of Madagascar. They are also one of the few mammals that hibernate.

Fat-tailed dwarf lemurs get their name from their big round tummies which they use to store fat. This extra layer of insulation helps them to survive the cold weather and long periods without food during their winter sleep.

These little lemurs are very active during the nighttime. They spend most of their time in trees but come down to the ground to look for food. Their diet consists of insects, fruits, and leaves.

During the winter months, fat-tailed dwarf lemurs will go into a deep sleep called “torpor”. Their body temperature and heart rate will drop, and they will not eat or drink for several months.

As the weather starts to warm up in the spring, the lemurs will wake up from their torpor and start to look for food again. They mate and have babies during the summer months.

Chipmunks are small, striped rodents that are found in North America. These animals hibernate during the winter months, which helps them to survive the cold weather.

Chipmunks are known for their large cheek pouches, which they use to store food. This allows them to have a constant supply of food, even when there are no leaves on the trees or other food sources are scarce.

When it gets cold outside, chipmunks prepare for hibernation. They spend more time gathering food and storing it in their cheek pouches. They also become less active, and their body temperature drops slightly.

During hibernation, chipmunks sleep for long periods. Their heart rate and breathing slows down, and they don’t eat or drink. This allows them to save energy and survive on their stored food reserves.

When spring arrives, chipmunks will come out of hibernation and return to their active lifestyle.

Box turtles technically don’t hibernate, but brumate. When the temperature outside starts to drop, these turtles bury themselves underground and sleep through the winter. They can go without food or water for months at a time while they slumber.

In the spring, when the weather warms up again, the box turtle comes out of brumation and resumes its active life. It will mate and lay eggs, then spend the summer months foraging for food and basking in the sun.

The box turtle is a chilly-blooded creature, so it needs to bask in the sun to warm up its body before it can start moving around.

Badgers are one of the animals that hibernate during winter. They are also fierce and aggressive when protecting their homes and families. Although they seem scary, badgers are shy and reclusive creatures.

Badgers are found throughout the northern hemisphere in North America, Europe, and Asia. In North America, they are most commonly found in the western United States and Canada.

Badgers are furry animals with short legs and long bodies. They have black-and-white striped fur on their faces, which is why they are sometimes called “skunk badgers”. Their fur is thick and oily, which helps repel water and keep them warm in their underground burrows.

The groundhog (Marmota monax), also known as a woodchuck, is a rodent of the family Sciuridae, belonging to the group of large ground squirrels known as marmots. They hibernate to survive cold winters.

It was first scientifically described by Carl Linnaeus in 1758. The groundhog is also referred to as a chuckling hog, groundpig, wood-shock, whistlepig, thickwood badger, Canada marmot, monax, and red monk.

The groundhog is a stocky animal with short legs, large feet, and a broad head. The fur on its upper body is usually brownish-gray in color while the underparts are grayish-white. It has a black “mask” across its eyes and a dark-colored ring around its neck. It typically weighs between four and seven pounds (two to three kilograms).

Bats are one of the many animals that hibernate through the winter. Their body temperature and metabolism decrease significantly in order to conserve energy. This allows them to survive on much less food than they would need otherwise. For bats, hibernating in large groups also provides some protection from predators.

There are three main types of bats found in North America: the little brown bat, the big brown bat, and the Mexican free-tailed bat. All three of these species hibernate through the winter months.

The little brown bat is one of the most common species of bats found in North America. These bats typically hibernate in caves or other sheltered areas.

The big brown bat is another common species of bat found in North America. These bats typically hibernate in trees, attics, or other structures.

Common Poorwill is a small hibernating bird found in North America. It is the only member of the genus Phalaenoptilus. The Common Poorwill is a nocturnal creature and is most active at night. It has a short tail and long wings, which make it well-suited for flying.

The Common Poorwill is brownish-gray in color, with a white belly. It is about 9 inches long and weighs about 1 ounce.

The Common Poorwill is one of the few birds that hibernate. Hibernation is a state of inactivity that animals enter to survive cold weather or periods of food scarcity.

While bumblebee workers die in the fall, the bumblebee queen hibernates through the winter. Bumblebees enter hibernation in the fall and emerge in the spring.

Bumblebee queens live for one year. They are born in the fall, whereafter they almost immediately go into hibernation. When she emerges in the spring, she lays the first worker eggs. Bumblebee workers only live for six weeks. As fall approaches, a new queen is born, and the cycle repeats itself.

During hibernation, bumblebees do not eat or drink. They live off of the fat stores they have built up during the summer months. Bumblebees are able to survive long periods of time without food or water because their metabolic rate slows down significantly.

When bumblebees emerge from hibernation, they must replenish their energy stores by foraging for nectar and pollen. Bumblebees are important pollinators of many plant species. They transfer pollen from one plant to another as they collect nectar and pollen for food.

Hedgehogs are small mammals covered in spines. These animals hibernate during the winter months. Hedgehogs are nocturnal creatures that can be found in Africa, Europe, and Asia.

Hibernation is an important process for hedgehogs, as it allows them to conserve energy and survive the cold winter months. During hibernation, a hedgehog’s body temperature will drop significantly and their heart rate will slow down.

These animals are generally shy and will not approach humans.

If you have a garden, you may be able to attract hedgehogs by leaving out some food for them.

Snails are a type of mollusk found in a wide variety of habitats, including freshwater, marine, and terrestrial environments. Many snail species hibernate during the winter months, burrowing into the ground to escape the cold weather.

Snails are known for their hard shells, which protect them from predators and the elements.

When a snail hibernates, its body temperature drops and its metabolism slows down. This allows the snail to conserve energy and survive on its stored reserves of food.

Snails typically awaken from hibernation in the spring, when the weather becomes warmer.

There are many different species of snails that hibernate, including the European snail, the common garden snail, and the American black bear.

Some snails, such as the common garden snail, hibernate for short periods of time, while others, like the American black bear, can remain in hibernation for several months.

Wood frogs are amphibians found in North America. They get their name from their habitats which include woodlands and forests. Wood frogs are generally brown or dark green in color with spots on their backs.

Wood frogs are one of the few amphibians that can hibernate through the winter. They are able to do this because they can produce a type of antifreeze in their blood that prevents them from freezing solid.

They burrow into the ground or find places under logs or rocks to hibernate.

The garter snake is a common type of snake found in North America. These snakes are known for their ability to hibernate through the winter months.

Garter snakes are relatively small snakes, averaging between two and three feet in length. They are typically brown or green in color, with stripes running down their bodies. These stripes can be black, white, or yellow in color.

Garter snakes are found in a variety of habitats, including forests, fields, and even gardens. They prefer areas with plenty of hiding places, such as under rocks or logs.

They are carnivorous, feeding on small mammals, amphibians, and birds. Garter snakes often times hunt in groups, using their numbers to their advantage.

This snake is not considered dangerous to humans. They can bite if they feel threatened. These bites are not poisonous and usually only result in minor swelling and discomfort.

How Does Hibernation Works?

What Animals Hibernate in Africa?

Common animals in Africa that hibernate include frogs, bats, hedgehogs, and more.

Do Animals Sleep Throughout the Entire Hibernation?

It’s a common misconception that animals sleep through the entire hibernation. Hibernation is actually a state of lowered metabolism and body temperature. Animals can enter into and exit from this state as needed.