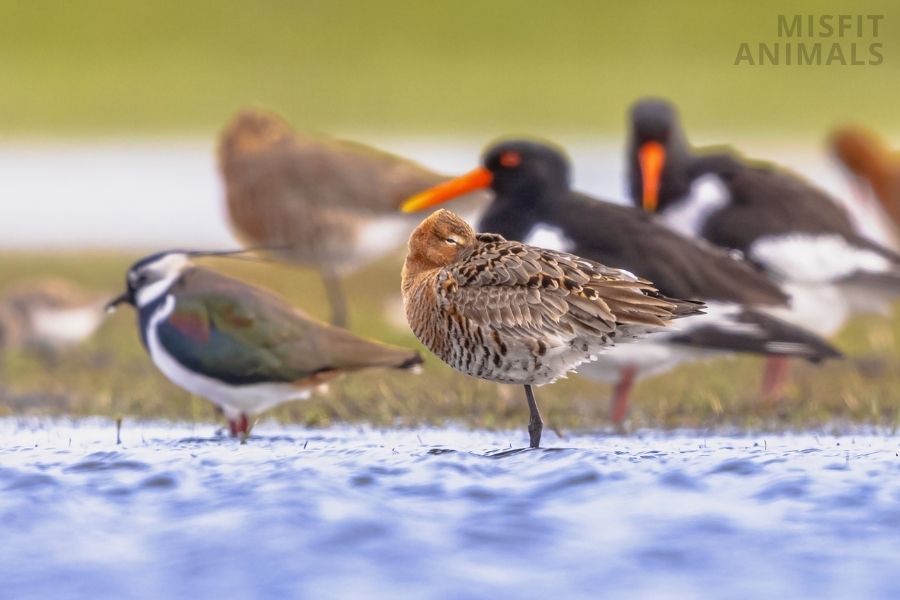 Migration is an incredible process that many animals partake in to better their lives.

Whether it’s a Monarch butterfly traveling from Canada to Mexico or a humpback whale swimming from Alaska to Hawaii, these creatures are constantly on the move in search of new habitats, food sources, and mating grounds.

If you’re curious about which animals migrate and where they go, read on for a list of some fascinating creatures that make this journey.

The polar bear is the only bear that migrates instead of hibernating. The black bear also migrates before hibernating.

The natural world is full of amazing creatures with fascinating adaptations, and one of these adaptations is the ability to migrate.

Animals that migrate are capable of traveling long distances over land or sea to find new habitats in which they can survive and thrive.

Here are a few migrating animals that you might want to know about:

Sea turtles are incredible animals known for their long-distance migrations from their hatching sites to their feeding grounds[1].

These amazing creatures travel hundreds or even thousands of miles, navigating through tricky terrain and treacherous waters in order to reach the safety and abundance of food sources available at different times of the year.

Sea turtles are uniquely adapted for life on the move. Their large, paddle-like flippers help them swim long distances with ease, while their hard shells protect them from predators and the elements.

Unfortunately, these same features also make them susceptible to being caught in fishing nets and other marine debris, which can cause injuries or even death.

Despite the challenges they face, sea turtles continue to migrate every year, ensuring the survival of their species. And with a little help from humans, we can ensure that these amazing animals are around for generations to come.

Baleen whales are a group of large marine mammals that rely on their baleen plates to filter small plankton and fish from the water as they migrate across the ocean in search of food. These enormous creatures can weigh up to 200,000 pounds and are found all over the world, making them one of the most widely distributed species on Earth.

These whales are migratory animals, meaning they travel long distances between their summer and winter homes[2].

In the summer, they feed in the rich waters of the Arctic and Antarctic, where they fatten up on krill, small fish, and plankton. In the winter, they migrate to warmer waters near the equator to mate and give birth.

While there is still much to learn about these fascinating creatures, scientists have discovered that baleen whales are incredibly intelligent animals. They communicate with each other using a complex system of song and calls, and they even form complex social structures and bonds similar to those of primates.

Dragonflies are migratory animals. Every fall, millions of dragonflies migrate southward, following the cues of shorter days and colder temperatures.

They fly hundreds or even thousands of miles to reach their overwintering grounds in Mexico, Central America, and the southern United States. Scientists believe that these migrating dragonflies use the sun to orient themselves during their journey.

While migrating, dragonflies can reach speeds of up to 30 miles per hour. To conserve energy, they often fly at high altitudes, where the air resistance is lower.

During their migration, dragonflies stop to rest and mate. Females lay their eggs in water, and the larvae that hatch will spend the next several months developing into adults. When spring arrives, the migrating dragonflies begin their journey back north. Along the way, they will stop to mate and lay eggs. The cycle then begins anew.

Wildebeest, also known as gnu, are large mammals that migrate to different areas in order to find food and water. These animals travel great distances to ensure they have enough resources to survive throughout the year. They primarily migrate in search of grasslands where they can graze and browse for vegetation.

Their migration patterns are highly complex, as they must navigate through a variety of obstacles including rivers, mountains, and deserts[3]. Wildebeests are known for their strength and endurance, as they are able to travel for long periods of time without rest.

These large creatures are herbivores, meaning they primarily eat plants. They graze on grasses and browse on shrubs and trees. They have a four-chamber stomach that helps them digest their food properly.

Many bird species are considered migrating animals. Some of the most popular migrating birds are ducks, geese, and swans. These birds travel in flocks, which helps them stay together and find food more easily.

Migration is a long journey that requires a lot of energy, so these birds often stop to rest and eat along the way. It requires a great deal of coordination and planning. While migrating, birds use various techniques to navigate their way to their destination.

Many migrating birds are able to sense the Earth’s magnetic field and follow it as they fly, allowing them to travel long distances with ease. Some migrating birds rely on sun angles and star patterns to stay on course.

Despite all of the challenges that birds face, they are able to complete their long journeys year after year. Their ability to adapt and find food, shelter, and safety along the way makes them truly remarkable animals.

Monarch butterflies are one of the most well-known animals that migrate. Every fall, they travel south from Canada to Mexico, a journey that can take up to two months. Monarch Butterflies are fascinating creatures, and their annual migration is an amazing sight to behold.

Once they arrive in Mexico, Monarch Butterflies spend the winter hibernating in the warm, dry climate. In the spring, they wake up and begin their journey back north to Canada. This round trip can be up to 3,000 miles and is an amazing feat of animal migration.

Caribou are majestic animals that travel across vast landscapes in order to survive. They are known for their incredible stamina and grace, making them one of the most awe-inspiring creatures on the planet.

These ungulates are unique among animals because they migrate in search of food and habitat. During the springtime, these graceful creatures begin moving from their wintering grounds in the south to their summer homes in the north.

This journey can be up to 3,000 miles long, and it is not uncommon for caribou to travel over 100 miles in a single day.

The fall migration is shorter but no less impressive. Caribou typically travel from their summer ranges back to their wintering grounds in order to take advantage of the plentiful resources.

Salmons are one of the most well-known fish that migrate, traveling thousands of miles from their ocean homes to their birthplaces in rivers and streams. Salmon are typically born in freshwater environments and then make their way back out to sea as adults.

Because they must return to the same stream where they were born, these iconic fish travel long distances along complex routes. These are often affected by changes in climate, water quality, and habitat.

Salmon play a vital role in their ecosystems as they provide food for other animals and help disperse nutrients throughout their aquatic environments. Yet due to human activity such as overfishing, habitat destruction, pollution, and more, Salmon populations have been declining rapidly in recent years.

Zooplankton is another migratory animal. They are small in size and move in large groups. Zooplankton plays an important part in the food chain and the global carbon cycle. Many species of zooplankton are endangered due to climate change and other human activities.

This is a diverse group of species that move through the water in search of food and resources. They are typically very small in size, ranging from just a few millimeters to several centimeters.

Zooplankton provides a source of food for fish, whales, and other marine animals. They also consume carbon-rich plankton and which releases carbon dioxide into the atmosphere.

During the migration, the crabs travel in large groups and cover a distance of up to 25 kilometers. The journey takes them through the rainforest and over rocky terrain and can last up to two weeks.

The crabs are vulnerable to predators during this time, but their numbers are so great that few are ever eaten.

Sharks are among the animal species that migrate, either to find new feeding grounds or to escape colder temperatures. These highly intelligent and adaptable animals are known for their speed and agility in the water, as well as for their unique physical characteristics.

Depending on the specific species of shark, they may travel thousands of miles during migration periods.

Sharks have been on Earth for millions of years and are believed to have evolved from a common ancestor of present-day fish. These predators play an important role in the marine ecosystem by helping to keep populations of other animals in check.

There are many different species of shark, each with its own unique migratory patterns and physical traits. Some species spend most of their time in deep waters far from land, while others remain near the shoreline or in shallow coastal areas. Many sharks migrate to warmer climates during the winter months, while others may travel thousands of miles to find new feeding grounds.

Tuna travel long distances in search of food and breeding grounds, making them some of the most widely-observed animals on the planet.

They are also among the largest fish species in the world, with adults typically growing to be over six feet in length. These powerful swimmers are capable of reaching speeds of up to 25 miles per hour, and traveling distances of up to thousands of miles.

The migratory habits of tuna are explored in great detail by scientists, who monitor their movements using tracking devices and other methods. One notable example is the work conducted by researchers at the Woods Hole Oceanographic Institution[4], who recently used satellite tagging to study the migration patterns of bluefin tuna.

Seals are one of the many animals that migrate. They travel long distances every year in order to find food and mate.

Seals are excellent swimmers and can hold their breath for a long time, which helps them during their journey. Although they are very graceful in the water, on land they are clumsy and slow. This makes them easy prey for predators such as polar bears and killer whales.

Despite the dangers, seals continue to migrate every year in order to ensure the survival of their species.

Why Do Animals Migrate?

Animals migrate for a variety of reasons. Some migrate to find food, some to escape the cold weather, and others to mate. Migration can be a dangerous journey, but many animals are able to make the trip successfully.

Migration is when an animal moves from one place to another on a regular basis. This can occur over a few days or over many months, depending on the species and their particular needs.