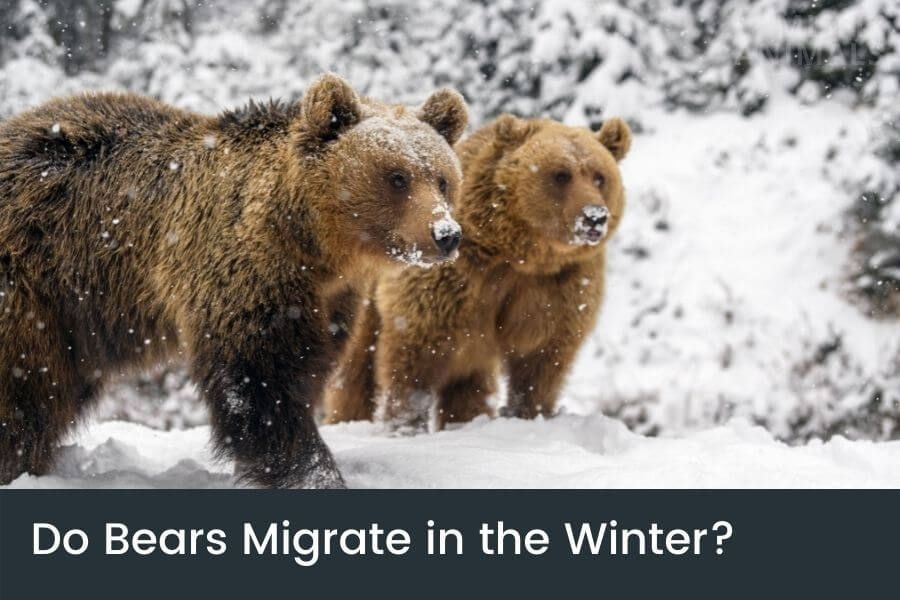 Bears are known for their hibernation, where they’ll sleep for an extended period of time to get through the winter.

This is an important survival skill, that allows them to get through the winter easier.

But do all bears hibernate? Not necessarily.

Of all bear species, the only one to truly migrate is the polar bear. While other bears hibernate (sleep through the winter), polar bears relocate for better food availability.

Most bears don’t migrate. However, there are two exceptions:

Experts agree that these are the only bears to migrate. In fact, the polar bear is the only species of bear to migrate habitually.[1]

They spend their summers near the Arctic ice pack and move to lower latitudes in winter. Black bears may do a little bit of migrating as well, but it’s not as common.

Bears that don’t migrate typically hibernate during the winter months. The denning process helps them conserve energy while they’re inactive. Depending on the climate and availability of food, some bears may only hibernate for a few weeks while others can sleep through the entire winter.

Polar bears migrate because they can’t survive in their natural habitat during the winter. The temperature drops too low, their prey migrates, and the ice packs move southward during the fall.

The only bears to truly migrate are polar bears. They move south during the fall and winter and move north during the spring. However, black bears may also partly migrate.

Black bears take part in seasonal migration when they’re getting ready for hibernation. They migrate for 6 weeks, looking for food to get ready to hibernate for the winter.

Whereas migration is typically done over an extended period of time (such as birds that migrate during the entirety of the winter), black bears take part in a shorter migration.[2]

They do not migrate to escape cold weather, but rather for food and shelter.

One report has bears traveling up to 104 miles (168 kilometers) during their migration season.[3]

Bears in the east migrate to areas with more of a mixture of forest and open land. This allows them to find food sources like acorns, beechnuts, and berries.

Bears in the west migrate to higher elevations where they can find cooler temperatures and firmer ground on which to hibernate.

Related: Do Black Bears Stay in the Same Area?

Polar bears migrate. They go south for the winter and north for the summer. This is called an arctic migration. By doing this, polar bears can avoid ice packs, and have better availability of prey.

Polar bears are the only true migratory bears, and studies of their DNA have confirmed this.[4]

These large land mammals are typically largely restricted to areas that have sea ice. As this ice moves southward during the fall, polar bears migrate away from it.

No, grizzly bears don’t migrate. They hibernate, usually in the winter months when food is scarce. In the spring, they wake up and go looking for food. Before hibernating, they will gorge on food.

In the spring, bears awaken from their slumber to seek sustenance before the mating season begins in May or June.

Alaska’s brown bears usually emerge from dens sometime around mid-May whereupon they will seek open spaces that provide plenty of opportunities to hunt for food.

Why Do Some Bears Migrate?

Most bears hibernate, which is why they don’t migrate. Instead of walking south, they simply go to sleep to get through the winter, where food is scarce.

Migration and hibernation are both natural responses to the same threat: cold temperatures and food shortages related to the coming winter.

Polar bears migrate in response to ice packs receding northward in the spring and summer[2]. They need to be on the ice to hunt their prey, seals. When the ice pack moves north, the polar bears follow it.

Black bears do not migrate as extensively as polar bears, but they do move around depending on food availability. In some parts of North America, black bears will migrate up to 100 miles in a year in search of food.

Other bears hibernate instead.

Why Do Bears Migrate?

Some bears migrate due to a change in living conditions. This includes the destruction of habitat or a decrease in food availability.

While most bears don’t take part in a seasonal migration, they can still migrate to new areas. This is typically due to one of the following:

If natural foods are scarce for an extended period of time, a bear will typically migrate to a new territory.

The migration process is extremely difficult for bears because their bodies aren’t designed to travel long distances. They also don’t have sweat glands (except for their paws[5]), so they rely on water sources along the way.

If there aren’t any available water sources – such as lakes and rivers – during the winter months, then a migrating bear could die from dehydration.

Where Do Bears Go In the Winter?

Bears go to their dens in the winter. When they hibernate, they do so in a den. Dens may be caves, hollow trees, or other openings, which bears will with leaves, grass, and twigs for isolation.

Bears have a number of strategies they can use to survive the winter. Some, like polar bears, will migrate to warmer climates.

All others, including grizzly bears, black bears, sun bears, and so on, will hibernate. They do so in their den.

These bears go into a state of deep hibernation where their heart rate slows down. They usually do this in late October or early November and wake up in late February or early March.

Bears can lose up to a third of their body weight during hibernation.

Polar bears are the only bears that truly migrate.

Bears Hibernate in the Winter

Yes, most of the bears hibernate in the winter. Hibernation typically takes place between November and March, where bears will be inactive.

Instead of migrating, bears hibernate to get through the winter. This is a process where they go into a deep sleep and their heart rate, breathing, and blood pressure all drop. Their body temperature also lowers significantly.

Bears can hibernate for up to six months.

In the spring, they will start to come out of hibernation and prepare for the summer. This is when they will mate and have their cubs.

Do Bears Migrate or Hibernate?

Both. Most bears hibernate, but polar bears migrate instead. Black bears both hibernate and migrate.

Polar Bears do migrate. According to the research, they do so in response to the movement of ice packs, which recede southward during the fall and winter.

Grizzly bears hibernate. They retreat to a den, where they’ll sleep through the winter. They rely on their thick fur to keep them warm and will eat a lot in the weeks coming up to hibernation.

Black bears do both. They migrate to prepare for hibernation.

The only bear to truly migrate is the polar bear. In response to receding ice packs and food shortages, they move southward for the winter. Black bears do also migrate, but only for six weeks in preparation for hibernation.

All other types of bears hibernate instead of migrating. They go into a deep sleep, where their body slows down to conserve energy.