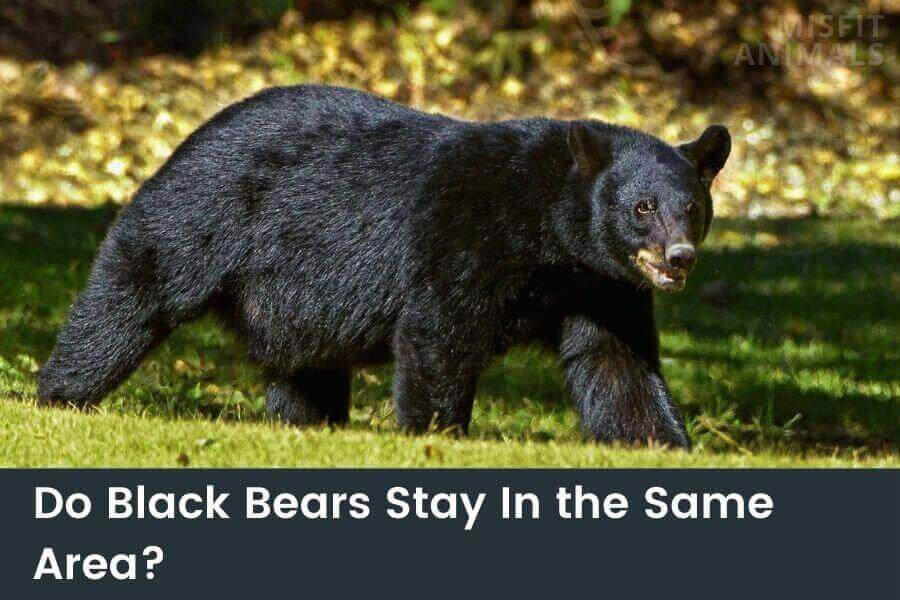 Black bears tend to roam around and don’t stay in the same area for long, unless there’s an incentive to do so, such as a reliable food source. They will return to the same spot if they know they can get an easy meal.

Black bears are one of the most common types of bears in North America. They can be found in many different habitats, but they usually prefer forests or swamps.

They are very adaptable and can survive in a variety of different environments.

While they tend to keep away from humans, they may be inclined to come by, if you have something that attracts them (food).

But do they stay in the same area for a long time? And will they return, if they’ve found food somewhere a single time?

Those are some of the questions, we’ll answer in this article.

Do Bears Stay In the Same Area for a Long Time?

Bears roam around depending on the living conditions. If there’s plenty of food around, they will typically stick around. If they are being threatened, due to human interaction or another animal, then they will move around more.

Black bears can be found all across North America. They’re roamers, and will generally move around (with the exception of hibernation).[1]

Black bears tend to stay near 25 square miles of their homes when they forage. This area can be larger or smaller depending on how much land is available and the available resources such as;

Black bears do not have a territorial instinct like other animals do, so they do not defend an area from intruders unless there’s a distinct threat against them.

How Long Will a Bear Stay In One Area?

Bears may stay for months around the same general area if there’s enough food[2]. This is why you may see them in your backyard or near your home more than once: they’ve found a reliable food source.

This tends to be especially true in the fall, as they are trying to build up fat reserves for hibernation.

While this is true, it also depends on if there are other bears in the same territory. If not, they tend to stick around longer.

Do Bears Come Back to the Same Spot?

If black bears find a great food source, they will return. They’re opportunistic hunters and will take advantage of easy meals. However, black bears are quite nomadic and can move great distances in search of food.

Black bears, just like all other bears, won’t waste energy if they don’t need to. If there’s plenty of food around, they’ll stick around.

While they don’t live directly next to their food source, they will return daily, or weekly, when they’ve found a reliable source.

When that’s said, black bears are also nomadic. They move around multiple times a year, looking for new den sites or feeding grounds.

They migrate most often when they’re searching for mates or new territory. They may migrate to the same areas each year if they associate a place with food and safety.

If a bear is forced out, because of competition from another male or overcrowding by other bears, it will begin looking for a new area. Male black bears can roam between 50 and 400 square miles for these reasons alone.

If there isn’t enough food available within a black bear’s home range it will expand its territory.

Will Black Bears Return to Your Backyard?

Yes, bears will return to your yard if they are attracted to something, and you don’t get rid of it.

Black bears tend to stay close to home. When they do venture off it’s usually because there is an abundance of food available nearby that they can be attracted by smells or sightlines so long distances aren’t necessary as long as what you want isn’t too far away.

How Far Do Black Bears Roam?

Female black bears will roam 2-6 miles away from their sleeping grounds when they’re with cubs, while males may roam up to 15 miles from den sites.

There are generally two types of roaming:

During their daily foraging and scavenging, female bears tend to roam less than 6 miles from their den site when they’re with cubs.

As males aren’t with cubs, they tend to roam farther. Their home range is approximately 15 miles.

In the fall, black bears will start to migrate in search of food. They’ll travel up to 100 miles (160 km). Once they find an area with enough food, they’ll stay there until they’re ready for hibernation.

Black bears tend to be nomadic, but if they live somewhere with a reliable food source, they’ll hang around[3]. This depends on the time of year, as black bears migrate before they hibernate.

When food is scarce, black bears have to move around more in order to find enough to eat. They also travel long distances when they’re looking for a new home.

There are a few reasons why black bears are nomadic:

Black bears aren’t dominant. They can be scared away by dogs, people, other bears, or other predators. Hence, they keep on the move to stay solitary.

No, black bears generally aren’t territorial. They may still defend food sources or their mate though.

Black bears do not have one fixed home territory like some other animals do. They are more than happy to wander over huge areas and may only return to the same place if there’s plenty of food.

Why Do Black Bears Leave Their Home?

Black bears are migratory animals, meaning that they do not stay in one place for very long. When summer turns to fall, an abundance of food is no longer available. Hence, they migrate in search of food.

They may also be threatened, either by other predators or by humans. In this instance, they’ll also move away.

Let’s dive deeper into these reasons for traveling.

There are a few things that can cause a black bear to leave its territory. One major reason is if they feel threatened. This could be due to humans encroaching on their territory or if there is a large predator in the area.

When black bears feel threatened, they will often leave their home range and look for a new place to live.

These bears aren’t dominant animals. They’re generally less aggressive than other species and will act submissive to avoid confrontation.

When Food Is Scarce

When food is scarce, black bears have a new home. They’ll migrate to a new area, sometimes up to 100 miles away from their current dens site.

Black bears are omnivores, meaning they eat both plants and meat. However, 60-90% of their diet plants, so if there are no plants around (either due to weather or other external factors), they’ll find a new place to feed.

Black bears are also known to be very adaptable. They can live in a wide variety of habitats, from forests to mountains to swamps.

And, since they’re omnivores, it’s easy for them to find food in different environments.

Black bears migrate before hibernating. This is unique to the American black bear, as this behavior isn’t seen in grizzly bears or other brown bears. They’ll leave their home in favor of more food.

During the winter months, black bears hibernate. But before doing so, they’ll migrate. They’ll leave their home, heading south to find more food.

Some black bears can migrate up to 100 miles during their partial migration.

Migration can also be a way for black bears to find new mates. Black bears will travel long distances to find a partner and start a new family.

Related: Do Bears Migrate in the Winter?

Black bears are known to be nomadic creatures. They move around a lot and generally don’t stay in the same place, except if they have a reason to. This reason is most often an abundance of food.

They may also return to the same feeding grounds each day, or each week if they find a reliable food source.

When they roam, they typically stay within 2-15 miles of their home (depending on gender).