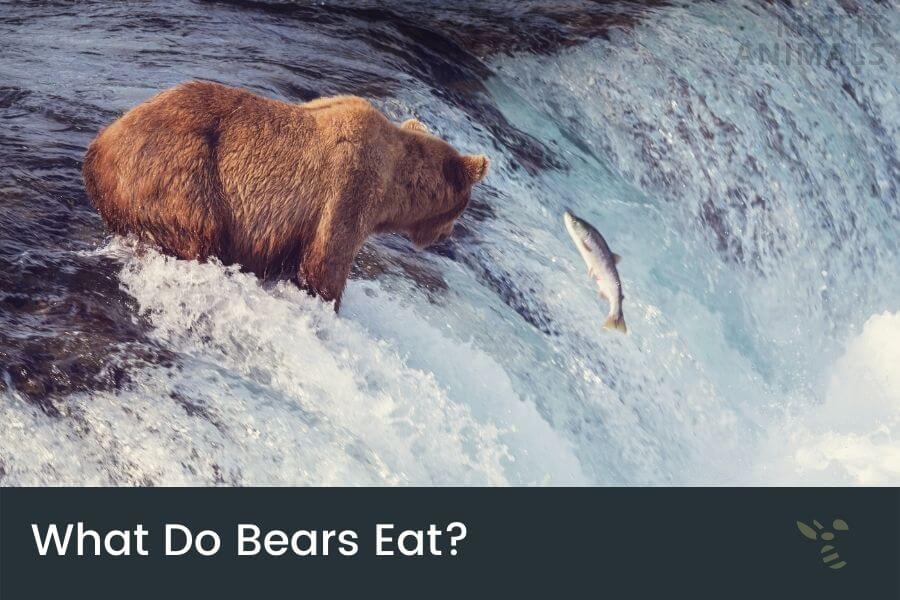 What do bears eat? Bears mostly eat insects, small mammals, berries, grass, herbs, roots, and other plants. They’re omnivores, which means they will eat both plants and animals. Most bears’ diet is primarily made up of plants.

Bears eat a variety of things. While different species have different diets, most species primarily live off of plants. They’re among the 3% of omnivores in the world.

Their diverse diet allows them to eat almost anything, and their digestive system is far less specialized than that of carnivores.

But what plants do they eat? What animals do bears eat? And what are the differences among the different species?

In this article, we’ll talk about bears’ diet, what foods different species eat, and what foods they primarily feed on.

These are the most commonly eaten thing by bears:

Most bears rely on plants for sustenance. Their diet consists of up to 90% plants but will vary from 60-90% depending on seasonality, availability, and other external factors.

While bears did evolve from an ancient carnivorous animal, they’ve developed the ability to ingest and digest plant matter. This natural adaptation allows them to easily find food wherever they are.[1]

Berries are a good source of nutrients for bears. They provide protein, carbohydrates, fiber, vitamins A and C, potassium, and antioxidants. Berries also help to keep bears hydrated during the summer months when water is scarce.

Bears eat a wide variety of berries, including:

In the summertime, they feast on strawberries, blueberries, mulberries, and cherries. In the fall, they enjoy eating acorns, hazelnuts, and walnuts.

Insects are a diverse and widespread group of animals that can be found in almost every environment on Earth. They are the most species-rich order of organisms, with more than 1 million different species.

Most insects provide a lot of protein, which is why bears eat them. Bears hunt for these on the ground, but will also raid insect nests in trees, such as beehives or ant nests.[3]

Fish are a healthy source of protein for bears, as well as other animals. Bears are great hunters and will fish using their sharp claws.

They specifically enjoy eating salmon and will fish for these on a daily basis, if they live in an area that has plenty of fish.

One study suggests that bears even pair up to fish. This pairing increased their attempts at catching fish, as well as their success rate.[4]

In the wild, bears can typically be found near rivers and other bodies of water where fish are plentiful. They will stand in the water to snatch a fish from the surface, or may even dive in to catch them underwater.

Ungulates are large, hoofed mammals. They are a large and diverse group and include everything from deer to moose.

Bears, and other large predators, regularly feed on ungulates. Since these prey animals are large, they provide plenty of food.

When bears attack ungulates, they sneak up on them to attack them from behind[5]. They use their sharp claws to maul the prey and will feed on them immediately after.

If they don’t finish their prey, they will cover it up with leaves and moss to preserve it, as well as hide it from other predators.

Small mammals and rodents are prey for many different predators, including bears. They’re easy to catch, and there are plenty of them to go around for all predators.

Birds can be found in a variety of habitats, including forests, grasslands, deserts, wetlands, and urban areas.

While birds don’t make up a large portion of bears’ diet, they’re still preyed upon. Bears will not only eat birds but also their eggs. As they’re great climbers, they can scale trees to get access to bird nests.

Yes, bears do eat meat. While most bears rely mostly on plants, about 10-40% of their diet is made up of meat. Fish and meat are important sources of protein for bears.

While most bears, such as black bears and grizzly bears, mostly eat plants, they do also eat meat.

Interestingly, polar bears almost only eat meat. Their diet is made up of 90-100% meat, depending on the season and availability of prey.

What Do Bears Mostly Eat?

Bears mostly eat plants. However, the diet of bears depends on the species; some bears are more carnivorous while others are more herbivorous.

The polar bear is carnivorous, while the panda bear is herbivorous.

What Plants Do Bears Eat?

Bears are very fond of honey. While they do get stung while raiding beehives, they don’t mind it, as long as they get to enjoy the honey. They also eat the bees in the hive.

What Berries Do Bears Eat?

Berries are a common food item in the diet of bears. They’re high in vitamins, minerals, calories, and other nutrients.

Bears eat a variety of berries:

Many bears will travel long distances to find a good berry patch.

What Animals Do Bears Eat?

Bears are omnivores, meaning they eat meat along with plants.

They also occasionally prey on large mammals such as moose calves or elk calves.

What Do Grizzly Bears Eat?

Grizzly bears eat a variety of foods. The primary component of a grizzly bear’s diet is plants, though they do consume small or large amounts of meat as well, depending on the season.

These large brown bears mostly feed on plants, as 60-90% of their diet is made up of vegetation. Aside from plants, they’ll eat fish, Insects, ungulates, small mammals, and rodents.

Grizzly bears are known to scavenge as well. They’ll eat off of carcasses of dead animals, which can provide them with a significant amount of food. In the fall, grizzlies will often feed on the discarded carcasses of elk that have been killed by wolves.

They will also scavenge in garbage dumps and eat meat from roadkill.

What Do Brown Bears Eat?

The majority of a brown bear’s diet is made up of plants. They eat leaves, fruits, and roots from both trees and shrubs. Brown bears also consume grasses, mosses, and lichens.

In the summertime and fall, when there are plenty of berries to be found, they will feast on these sweet treats.

What Do Polar Bears Eat?

Polar bears mostly feed on ringed and bearded seals. They’re the most carnivorous species of bear, as they almost only eat meat.

Polar bears have also been known to eat other marine animals, such as walruses, beluga whales, and narwhals.

What Do Black Bears Eat?

Black bears are very opportunistic eaters and will take advantage of whatever food is available, however, most of their diet consists of plants[6].

Black bears are very adaptable. They’re even known to raid garbage cans, campsites, and beehives. They also kill and eat other animals, including deer, elk, moose, bighorn sheep, and even cubs of their own species.

These smaller bears will typically feed on plants in the spring, small mammals during the summer, and berries and nuts in the fall.

Unlike other bears, black bears migrate before hibernating. They will migrate south to find additional food before sleeping through the winter.

What Do Panda Bears Eat?

Panda bears eat bamboo, vegetables, and other plants. They’re herbivores and the only species of bear that doesn’t eat meat.

Panda bears are one of the most popular animals in the world. They are black and white and have a very distinct appearance.

Panda bears mostly eat bamboo, but they also eat other types of plants, such as vegetables. They are herbivores, as their stomachs have evolved to digest bamboo specifically.

What Do Sloth Bears Eat?

Sloth bears primarily eat insects, such as termites and ants. They also eat a variety of plants, including acorns, bamboo, berry bushes, and fig trees.

Sloth bears are one of the eight species of bear found in the world. As their name suggests, they are known for being slow and lazy.

They have shaggy black fur, and they have a distinctive cream-colored patch on their chest.

They sometimes catch small mammals or fish to eat, but mainly feed on insects.

What Do Sun Bears Eat?

Sun bears are the best climbers among bears and hence feed on many foods found in trees, such as fruits, birds, insects, and small rodents.

The Sun bear (Helarctos malayanus) is a species of bear that is found in the tropical forests of Southeast Asia.

They are the smallest bears in the world and are also known as honey bears because they love to eat honey.

Sun bears have black fur, and their muzzle, chest, and stomach are white. They are arboreal animals, meaning they live in trees, and are excellent climbers. Sun bears are also good swimmers.

What Do Spectacled Bears Eat?

Spectacled bears are not very picky when it comes to food. They will eat anything from honey to small animals, but mostly eat fruits and vegetation.

Spectacled bears are very good at adapting to their environment. They have been known to eat whatever is available. They also scavenge for food if necessary.

What Do Bears Eat In the Winter?

Bears don’t eat much during winter, as they hibernate. They eat a lot in the weeks before hibernation, including roots, leaves, berries, small mammals, and ungulates.

Bears hibernate during the winter, so they don’t need to eat as much as they do during other times of the year.

Related: Do Bears Migrate in the Winter?

What do Do Bears eat Before Hibernation?

During the winter, bears hibernate. Before doing so, they load up on food. They will eat a mix of vegetation and meat.

When bears prepare for hibernation, they focus more on the quantity of food rather than what food it is. As long as they get enough calories, they don’t mind feeding on either plants or meat.

While most bears hibernate, not everyone does. Polar bears migrate instead of hibernating.

Bears are omnivores, meaning they feed on both plant matter and animals. Their diet mainly consists of plants but also includes insects, fish, small mammals, and rodents.