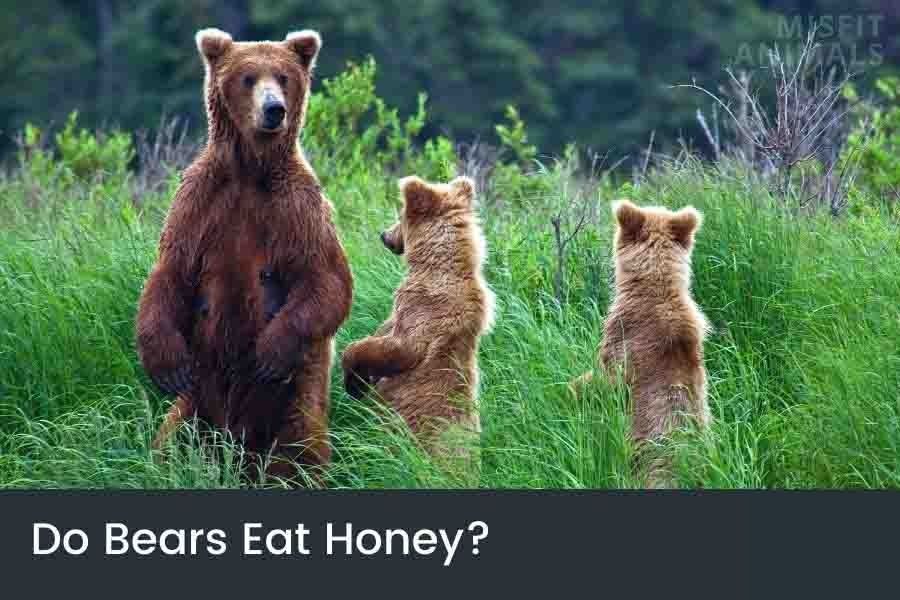 Bears do eat honey. They eat it for its high calories content, and its many carbohydrates. But it’s not just the honey. Bears also eat the bees and the brood for protein.

Bears, members of the Ursidae family, eat a lot. And they eat many different things, as they’re omnivores.

Feeding on both plant matter and meat allows them to eat almost anything. But what about honey?

In this article, we’ll take a look at the feeding habits of bears, more specifically whether bears eat honey, or whether it’s a myth.

Yes, bears do in fact eat honey and are attracted to beehives. Bears love honey for its sweetness.

Bears are big animals, and hence need plenty of calories. Honey is a sugary substance, high in calories and carbohydrates, providing bears with plenty of both.

They don’t just eat the honey, but also enjoy consuming bees, pupae (bee babies), and eggs as these are good sources of protein.

That’s why bears will often attack beehives to get their sweet fix while also getting a nutrient-filled meal too.

Bears don’t stick to honey. They also eat the bees and their brood (the larvae, pupae, and eggs).

They eat the insects because they provide protein in addition to the sugar found in honey.

Why Do Bears Eat Honey?

Bears eat honey due to its high contents of sugar and carbohydrates. However, bears are also very interested in the protein from the bees themselves.

Honey is a great source of carbohydrates, and it’s primarily sugar. Bees and brood is a good source of protein, so when a bear eats honey, it’s getting the best of both worlds.

Bears also enjoy the taste of honey, and it’s something that they seek out.

Bears have been known to travel long distances to find a good source of honey. And once they find one, they’ll stick around until they’ve eaten as much as they can.

Do Bears Get Stung by Bees When Eating Honey?

Yes, bears do get a lot of painful stings, but they’re willing to endure the pain to get to the honey and bees inside the hive.

Bears are able to tolerate pain better than most animals due to their high tolerance for natural toxins. Their thick fur coats also help protect them from stings.

Despite these adaptations, bears still get hut when they’re stung, and it can be a painful experience.

Due to the very thick skin of bears, bees have a difficult time getting through to their flesh[1]. They can however do some damage to their ears, tongue, and general facial area.

All bears eat honey. Most bears share the same diet, a mix of meat and plant matter. Beehives provide both.

Both Brown and black bears enjoy honey of all kinds. Bears will typically eat anything they can catch or get their hands on, whether animal or vegetable, including honey bees themselves.

Bears don’t kill the bees before sucking out the sweet nectar inside. While feasting on a beehive, worker bees sting their paws to protect the hive. Bears are willing to endure this pain to get to the honey.

Yes, they do. Grizzly bears[2], also known as brown bears, enjoy honey a lot and eat it for its sugar content. In addition to the sugar, grizzlies also consume the bees, larvae, pupae, and eggs, as these are good sources of protein.

Yes, they do. Black bears are opportunistic omnivores, which means that they’ll eat whatever is available and easiest to get their paws on.

Black bears can consume up to 15% percent of their body weight in a single day without putting their health at risk.

Do Bears Climb Trees to Get Honey?

Yes, bears are even willing to climb a tree in order to get to honey and bees. They do this because honey is such a good source of energy.

Bears are great climbers. With their strong curved claws, they can scale tall trees with agility. Hence, they do climb trees to get to the honey.

The large animals are drawn to beehives. They have an excellent sense of smell which helps them locate food items like honey. Not only do they climb trees to get to the honeycombs, but they’ll also break into beehives in order to steal the honey.

Bears will eat honey for its sugar content, but they also eat the bees, larvae, pupae, and eggs, as these are good sources of protein.

Bears are omnivores and will eat both plants and meat[3]. A bear’s diet is primarily made up of plant matter, as much as 90% of it, but they do eat meat.

Bears are famous for eating honey and do so because of the sugar content in them.

However, this is not all that bears like to consume; bees also make up a large part of their diet as well.

Bears are omnivores, meaning they eat both meat and plants. Hence, bees provide food for bears in two ways:

Bear’s diets change seasonally depending upon what types of foods are available during different times of the year. They eat more plants in the spring while hunting more during summertime.

Plants do most of their growing during the spring and summer months when there are long hours of daylight for photosynthesis to occur.

During these seasons they grow very quickly by absorbing water through their roots. When plants bloom and blossom during the spring, bears will consume plenty of them.

Plants make up the majority of a bear’s diet, up to as much as 90%.

As omnivores, bears enjoy a variety of foods in their diet, including meat. While they do eat honey, it is not their main source of nutrition.

Bears consume significant amounts of protein from insects, such as bees, fish, small mammals, rodents, and even larger prey such as deer.

This helps fulfill their nutritional needs. By eating meat, bears are able to get the nutrients they need to thrive in the wild. In addition to being healthy, meat is also very tasty to bears. They love the flavor and texture of raw meat and will often scavenge for carcasses or hunt prey themselves.

As with all aspects of their lives, bears approach hunting and scavenging with great care and skill.

Bears do eat honey, but not only that. They also eat the bees. They consume honey for its sugar content, as well as the protein that is found in bees, larvae, pupae, and eggs.

Bears are opportunistic feeders and will consume whatever is available to them. This includes fruits, vegetables, insects, meat, and yes – honey.

They’re so fond of honey, that they’ll even be willing to climb trees to get to the honey. Bears are very skilled climbers and can gather more food this way.