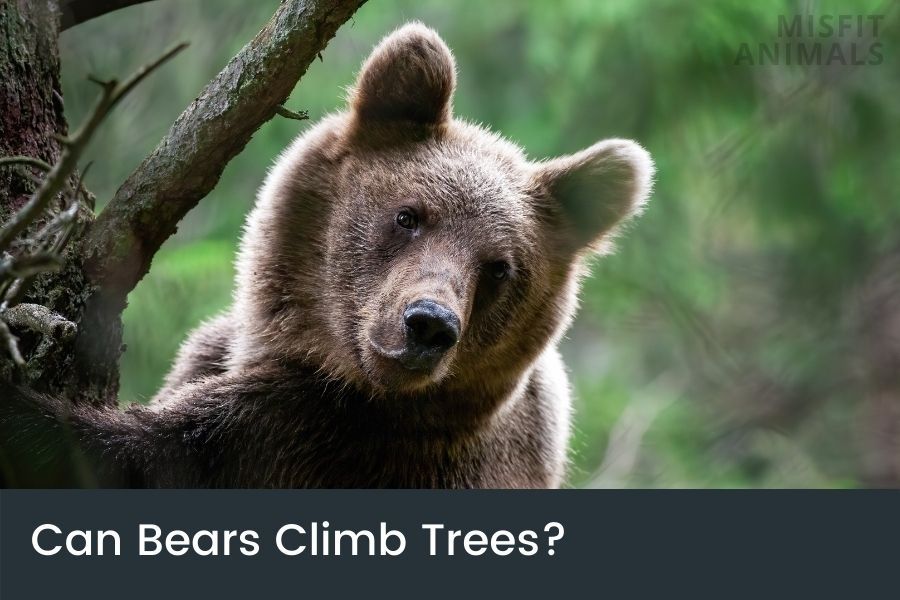 Bears can climb trees, however, their ability to climb trees varies depending on the species. For example, Black Spectacled, and Sun bears are excellent climbers as they’re smaller in build, but still very strong, while Grizzly Bears are too large to be fast climbers.

Bears are adaptable creatures. They’ve evolved over thousands of years to survive in most habitats, as well as to eat anything.

In some cases, they may be attracted to something residing in a tree.

In this article, we’ll answer those questions. We’ll discuss how, why, and when bears climb trees.

While most bears are excellent climbers, not all species are. The larger species do have some trouble getting into trees, especially when they prepare for hibernation, where they can reach 1,500 pounds (680 kg) or more in body weight.

The ability to climb trees is an important skill for bears, as it allows them to access food that is high up or in hard-to-reach places.

Bears have specially adapted claws that help them grip onto tree bark and branches. They also have powerful muscles in their legs and arms that give them the strength needed to pull themselves up.

Are Bears Good at Climbing Trees?

As these species are smaller, their legs can generate more explosive power, which is better for a faster ascend.

How Do Bears Climb?

Bears use different strategies to climb. Smaller bears, such as black bears, sun bears, and spectacled bears, almost run up trees. They’ll use their claws to grip the bark, using their front legs to pull them upwards, while simultaneously pushing with their hind legs.

This allows them to scale large trees in a matter of seconds.

Larger bears climb with the help of large branches. Grizzly bears are too heavy to scale a tree in the same way as black bears. Instead, they’ll climb on the branches.

Not all adult grizzly bears can climb, as they’re very big, however, the cubs are very great climbers.

All grizzly bears can climb to a certain extent, however, their method changes as they get older. When they’re cubs, they’ll use their hind legs more, while adult grizzlies use their powerful front legs to pull themselves up via the branches.

Exactly as grizzly bears, brown bears have strong muscles in their arms and legs, which give them the strength to pull themselves up into the branches.

A common misconception about black bears is that they climb backward, with their rear first. This is not true, as they essentially run up trees instead.

Because of their small size, they have no issue climbing. Their legs are plenty strong to carry them upwards. They also have sharp and curved claws, so they can get a good grip on the bark of the tree.

They’ll climb into trees to get to birds, bird nests, beehives, and other foods.

Polar bears can’t climb trees. They’re too heavy[2]. Polar bears can swim extremely well, though. They use their swimming abilities to catch food in the water.

Additionally, polar bears can walk on ice very well. This helps them hunt prey that lives on or near the ice.

Polar bears are the largest land predators in the world. The largest specimen recorded weighed 2,209 pounds. Animals of that size are simply too large to climb trees.

Sun bears are great climbers, partly due to their size. They spend much time in trees, looking for food and resting.

A powerful sense of smell and huge ears enable sun bears to hear prey moving through the forest canopy. With their shard, curved claws, they’ll scale trees to get to any prey, insects, fruits, or simply to find a place to rest.[3]

Sun bears also know how to travel through the trees quietly, so as not to alert prey to their existence.

Some panda bears are great at climbing trees, while others aren’t capable climbers. Research shows how some pandas figured out how to climb with the help of their heads. Other pandas weren’t as clever.

Although pandas are bears, not all of them can climb. Studies of giant pandas around sanctuaries reveal how some individuals can climb, while others couldn’t.

The difference was how they used their head as an extra climbing limb.[4]

Asiatic bears climb trees much like black bears. Asiatic bears spend a lot of time in trees because they provide additional security against other predators. They often have to climb to find food, especially fruits and nuts.

Asiatic bears like to live in forests near water sources. They’re solitary animals, except for when mothers are with cubs.

Sloth bears are often found hanging around in trees, where they’ll be feeding on insects[5]. They have a very good sense of balance, which helps them stay safe while they’re eating high in the trees.

Few things allow sloth bears to climb so well. Their large claws let them grip the tree trunk. Their muscular arms and shoulders allow them to drag themselves up into the branches.

Finally, their nimble paws and flexible spine let them travel fast between the trees.

Why Do Bears Climb Trees?

Bears climb into trees to find food. They’re fond of insects, such as bees, berries, fruits, and birds, and will go looking for these in trees. They also reside in trees for protection.

Some bears climb trees for food. Others like to rest in trees, as they’re safer there. Most other predators that reside on the ground can’t climb as well as bears.

Many trees are full of food. Whether it be insects, birds, fruits, or berries, bears can typically find something to eat off the ground. Hence, they’ll climb to reach it.

How Fast Can Bears Climb Trees?

Bears can climb extremely well, with some ascending at speeds of up to 10 mph (10 feet per second). They can’t climb as fast as they can run.

Some bears are fast climbers, such as black bears, sun bears, and spectacled bears. Others are slower, such as grizzly bears and brown bears.

The speed of small bears comes from a combination of strong muscles, well-structured claws, and strategic climbing methods – they often start climbing from a running start.

Do Bears Sleep in Trees?

Yes, some bears do sleep in trees. Trees are great places to stay safe from other predators, hence sun bears and sloth bears will rest here.

Large bears typically don’t worry about other predators. This is a different story for small bears, who may seek refuge in trees to rest.

They’ll climb into trees to sleep, as they don’t have to worry about attacks. They’ll often rest in trees where they can also feed on fruits, berries, or other foods.

Related: Do bears sleep in trees?

Can You Escape a Bear by Climbing a Tree? (Myth)

No, you can’t escape a bear by climbing a tree. This is a myth. As bears are very capable climbers, you wouldn’t escape anything by climbing into a tree. In fact, the bear can probably climb faster than you can.

If you want to escape a bear, you should instead back away slowly. Avoid provoking, or other agitating, the bear.

Bears are excellent climbers. Spectacled bears and Sun bears are especially good at climbing trees. They climb trees to find food in the form of fruit, insects, or honey.