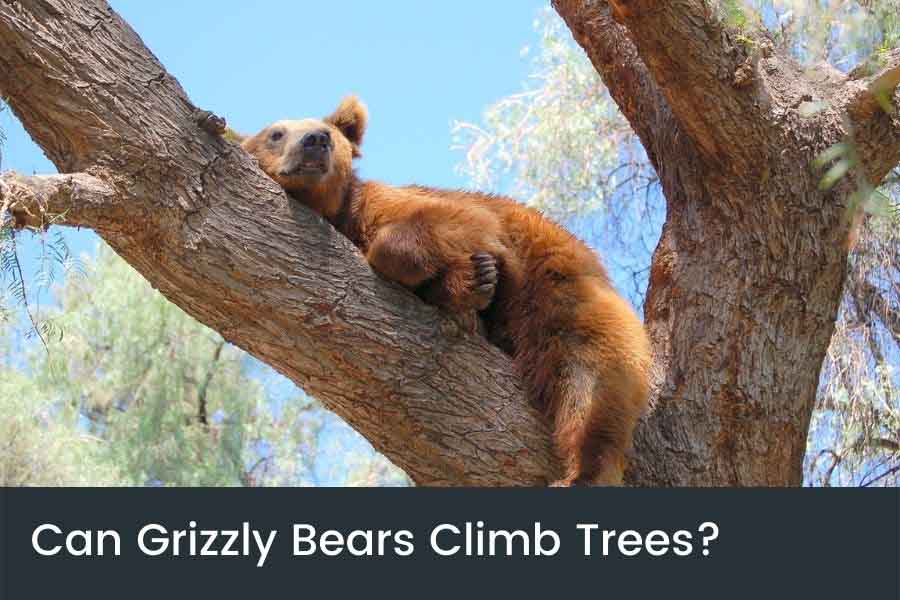 Grizzly bears can climb trees, but they’re not as good at it as black bears, or other smaller, and nimbler, bears. They’re very large, and hence can only climb large trees, as smaller ones can’t support them.

They’re among the biggest land predators on the planet, which is why it might sound strange, that they should be able to climb trees.

But can they really do that?

In this article, we will discuss how grizzlies climb trees and why it’s an important skill for them to have. We’ll also take a look at some of the differences between cubs and adults when it comes to climbing.

Yes, grizzly bears can climb trees. However, their size and weight make it difficult for an adult bear to do so. Grizzly cubs are more adept at climbing than adult grizzlies.

Brown bears, including grizzly bears and others, can weigh up to 800 pounds.[1] Hence, the first challenge when climbing is to find a tree that’s strong enough.

As these bears grow large, they become less mobile, and less agile, which is why cubs are better suited for such acrobatics.[2]

Grizzly bear cubs can get up a tree pretty quickly if they need to escape from danger or an aggressive bear.

Grizzly bear cubs are better at climbing than adult grizzly bears. Adult grizzlies are too heavy to climb well. They can clamber up a tree trunk, but they have difficulty maneuvering through the higher branches.

Cubs, on the other hand, are smaller and more agile. They can easily scamper up and down tree trunks and navigate through the branches.

This helps them escape danger and get to food sources high in the canopy.

How Do Grizzly Bears Climb Trees?

To climb trees, bears use their raw power, incredible strength, and they make use of their front legs to climb on the lower branches. This way, they can pull themselves up.

They Use Their Strength

Grizzly bears make use of their incredible strength to climb trees.

When they start their climb, the Grizzlies stand on their hind legs to get a better reach and use their claws and front paws to grasp onto lower, stronger branches.

They also use their powerful jaws to hold on to tree trunks. Grizzlies can climb trees to escape danger, get food, or simply for fun.

Grizzly Bears Climb on the Branches

Due to their large size, grizzly bears can’t climb very high. Otherwise, the branches break. They’re also too large to support their weight with their hind legs, and hence can’t run up a tree like a cat, or a black bear, can.

Instead, they make use of the branches and their powerful front legs.

By using their front legs, they can pull themselves up into trees, as long as the branches can support their weight.

How Good Are Grizzly Bears at Climbing?

Grizzly bears are relatively good at climbing trees when you consider their size. They can climb because they have claw-like nails that help them grip the bark of the tree.

Compared to black bears, sun bears, or spectacled bears, they’re not very good at climbing, again due to their size.

They have several reasons for climbing:

However, it’s not all that common to see a grizzly bear in a tree, as they prefer to stay on the ground.

Grizzly bears are not as fast or as efficient as other animals that climb trees such as monkeys or even black bears. It takes them a while to scale a tree.

Grizzly bears can climb trees, but they do not move quickly through the trees. They’re definitely slower at climbing trees than they are at running

When running, they can reach speeds of up to 30 mph. This is again due to their large muscles, and the large hump on their shoulder blades where they have a large muscle mass.

How High Can Grizzly Bears Climb?

Grizzly bears are an American subspecies of the brown bear, found in western North America. They have an average body weight of 400 to 770 pounds (181 to 349 kilograms), which is why they can’t climb tall trees.

The tree would simply not be able to hold the bear’s weight.

How Common Is It for a Grizzly Bear to Climb a Tree?

Grizzlies were not made to be climbers, hence it’s a rare sight. They do so occasionally to get access to food, to chase prey, or if threatened.

In most cases, you will see a grizzly bear climb a tree if it’s chasing prey. They are able to climb branches fairly quickly because of their muscular build and sharp claws, however, they’re slow compared to other animals.

Can You Climb a Tree to Escape a Grizzly Bear?

No, you can’t climb a tree to escape a grizzly bear. While they’re slower than other bears, due to their large build and long claws, they will reach you in a tree.

If a grizzly bear is chasing you, don’t climb into a tree. It’s a common misconception that bears can’t climb.

Instead of climbing a tree, you should slowly back away from the bear. don’t make any sudden movements, and don’t turn your back and run (this will trigger their hunting instincts).

Grizzly bears rarely attack humans, but if it happens, your best bet is to lay down, cover your head, and hope for the best.

Related: Can You Outrun a Bear to Escape an Attack?

Grizzly bears are one of the biggest and most dangerous predators in North America. They can weigh up to 700 pounds and grow up to nine feet long.

However, they tend to avoid confrontation rather than instigate it. Bear attacks on humans are rare. They typically happen if the bear is threatened, provoked, or otherwise agitated.

These large bears are more dangerous to pets than humans. They have been seen killing dogs that have joined their owner on hiking trips.

Are Black Bears Better at Climbing Than Grizzly Bears?

Black bears are considered agile climbers, and they’re much better at it than their relative, the grizzly bear. The black bear can climb trees with an average tree height of about 20 feet or more.

When black bears climb, they can run up the tree. They have shorter claws, and weigh less, allowing them to climb using both their front and hind legs.

As a result, they can scale trees very fast.

The best climbers among bears are the sun bear. These will often be seen resting or feeding in trees.

Related: Do Bears Sleep in Trees?

Grizzly bears can climb trees, but they’re not very good at it because of their size and long claws. Grizzly bear cubs are better at climbing than adult grizzly bears.

There are several reasons an adult grizzly bear may climb a tree, but many times they do so in the search of food, or if their prey has escaped into a tree.

While they are good at climbing, they’re not as good at it as black bears, sun bears, and spectacled bears.