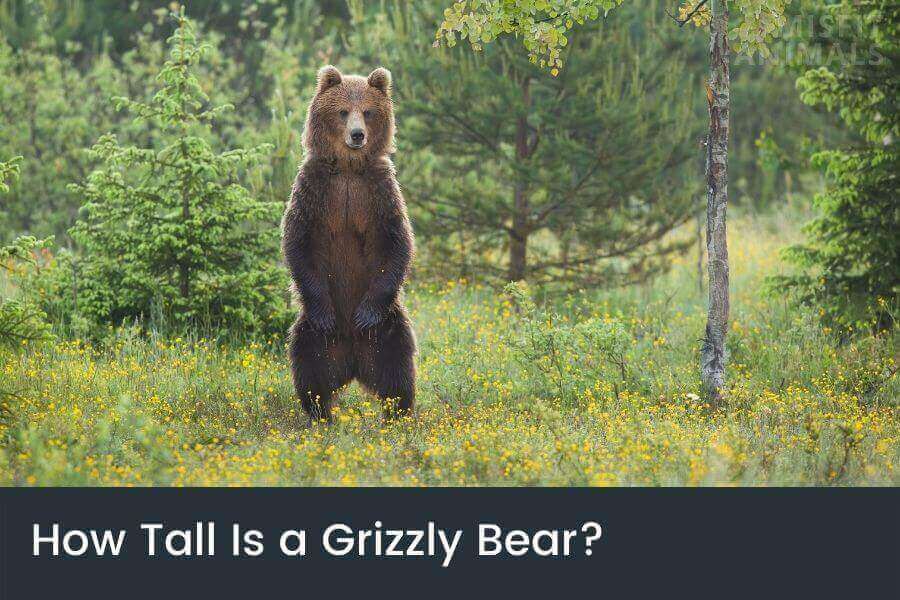 Grizzly bears are one of the largest land predators in North America. They are distinguishable by their brown fur and distinctive shoulder hump.

They’re also very long. But how tall are they? And how tall are grizzly bears when standing on their hind legs?

In this article, we’ll discuss how big grizzly bears are, how tall they are on all four and when standing up, as well as how they compare to other bears.

How Tall Is a Grizzly Bear Standing on All Four?

Grizzly bears are among the largest bear species. They’re taller than black bears, which are the other type of bears found in North America.

When standing on all four legs, they’ll typically be between 3.35-4.9 feet tall at their shoulders.

How Tall Is a Grizzly Bear Standing Up?

Grizzly bears can reach up to 10 feet (3 meters) when standing on their hind legs, while the average grizzly bear reaches about 8 feet tall (2.44 meters).

Grizzly bears are one of the largest predators in the world[1]. They can weigh up to 800 pounds and measure up to 10 feet tall when standing on their hind legs.

While they typically roam around on all four legs, they’ll stand up in a few scenarios:

The tallest grizzly bear on record was a male weighed 1,200 pounds and measured 10 feet and 6 inches from nose to tail.[2]

This is significantly taller than the average grizzly bear, which stands measures about 8 feet.

Grizzlies can weigh anywhere from 300 to 1,000 pounds (136 to 454 kg), making them one of the largest land carnivores in North America. However, this large bear went off the scale by 200 pounds.

Are Grizzly Bears the Biggest Bears?

No, grizzly bears are not the biggest bears. The biggest bear species is the Kodiak bear, which can grow to be more than 10 feet in length and 5 feet when standing on all four legs.

Grizzly bears are big. They weigh in at around 680 pounds (308 kg), and will typically grow up to 8 feet in length. However, they’re bested by both Polar bears and Kodiak bears.

Which Is Bigger Black Bear or Grizzly?

Grizzly bears are much larger than black bears, with the average grizzly being around 3.5 feet tall when standing on all four and weighing in at around 400-700 pounds. In comparison, black bears are usually only about 2.5 feet tall and weigh between 200 and 500 pounds.

While grizzlies can get as big as 600 or 700 pounds, black bears rarely exceed 500 pounds.

How Tall Are Bears? (Other Species)

How Tall Is a Polar Bear?

Polar bears can reach up to 10 feet when standing on their hind legs, while they’re typically about 3.5-4.5 feet on all four.

They are mainly white, but their feet are black.

How Tall Is a Black Bear?

Like grizzly bears, black bears stand on their hind legs to get a better view of their surroundings.

How Tall Is a Kodiak Bear?

Kodiak bears can reach heights of 10 feet (3 meters) when standing on their hind legs, and they have been known to weigh as much as 1,500 pounds (680 kg).

These bears are the largest subspecies of brown bears. They are also the second-tallest species of bear, after the polar bear.

How Tall Is a Panda Bear?

The height of a panda bear can vary depending on the species. For example, the giant panda can weigh up to 220 pounds (100 kg) and reach a height of 6 feet 9 inches (2.1 meters).

Their smaller cousin, the red panda, typically weighs in at around 11 pounds (5 kg) and reaches a height of 18 inches (46 cm).

How Much Do Grizzly Bears Weigh?

Contrary to what their name might suggest, grizzly bears are not always grizzled in color. They can be black, blond, or brown, often with a white chest and muzzle.

You can distinguish grizzly bears from black bears by the hump on the back, which black bears typically don’t have.

While bears are large, there are also some other very big animals out there, such as the silverback gorilla, Siberian tiger, and hippopotamus.

An average hippopotamus weighs around 2,500 pounds (1134 kg), so a grizzly would be pretty small in comparison.

The same goes for elephants – an average African elephant weighs around 12,000 pounds (5443 kg), so a grizzly would be less than half its size.

Grizzlies are pretty big animals, but they pale in comparison to some of the other giants out there.

Siberian tigers measure about 5 feet 3 inches to 6 feet 8 inches (160-200 cm) in length, which is smaller than the average grizzly bear.

However, grizzlies are much taller (when standing up), measuring in at 8-10 feet. In comparison, Silverback gorillas only measure about 5.25 feet.

Grizzly bears aren’t the biggest bears, as they’re smaller than both Kodiak bears and Polar bears.

In terms of weight, grizzly bears can reach up to 1,700 pounds, but will typically weigh close to 700 pounds. Males are bigger than females.