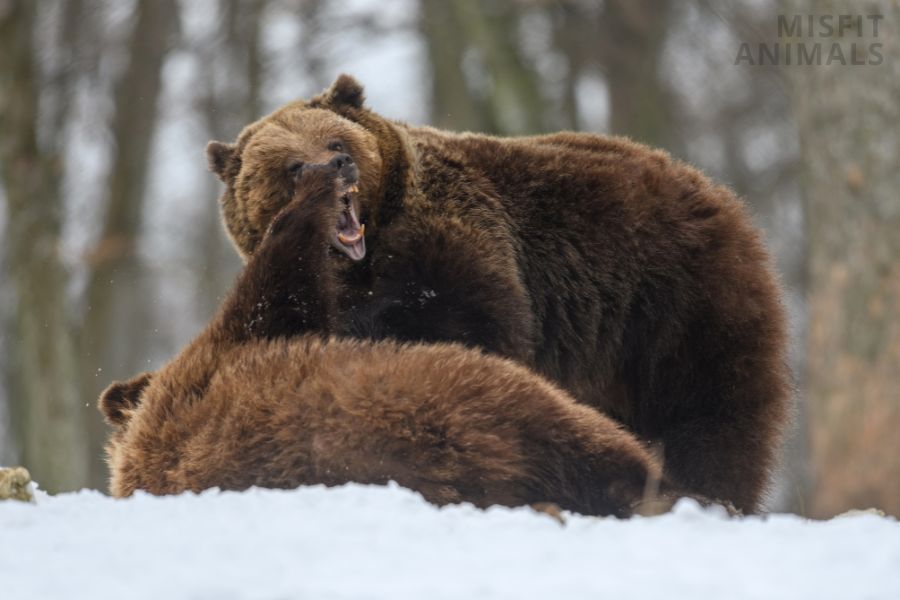 Bears are one of the most feared animals in the wild. They are incredibly powerful creatures that can do a lot of damage.

But which bear is the strongest? And which is the most dangerous?

Today, we’re going to take a look at some of the most powerful bears out there and rank them according to their relative strength.

Bears are generally large, with some much larger than others.

Here are the biggest and absolute strongest bears:

List of the Strongest Bears Based on Relative Bite Force

There are many different types of bears found all around the world. Some of these bears are large and powerful, while others are more gentle in nature.

But, some of the largest bears are not the strongest relative to size.

“Bite force quotient (BFQ) is the regression of the quotient of an animal’s bite force in newtons divided by its body mass in kilograms.” – Wikipedia

This is a list of the strongest bears ranked on bite force relative to mass (BFQ):

The Kodiak bear is a subspecies of the brown bear and is found on the islands of the same name in Alaska. These massive animals are the second-largest members of the bear family, with males reaching up to 1,000 kilograms in weight.

Kodiak bears are also excellent swimmers, often hunting for fish in the waters around the islands[1]. They also have a BFQ of 292, making their biting pressure quite powerful.

The Kodiak bear gets its name from the Alutiiq word “aqtugaq”, which means “the great brown bear”. These bears are also sometimes known as Alaskan brown bears or brown bears.

The Kodiak bear is an endangered species, due to habitat loss and hunting. Recent conservation efforts are helping to protect this amazing animal and its habitat.

The sun bear is the smallest member of the bear family, but don’t let its size fool you. This little bear is still a powerful predator with a BFQ of 160.5.

Found in the tropical forests of Southeast Asia, the sun bear is an excellent climber, spending a lot of time high up in trees. They nap, forage, and hide in trees.

Sun bears get their name from the distinctive yellow or orange markings around their eyes, which resemble the sun. These bears are also known as honey bears, as they are attracted to bee nests and often raid them for honey.

The sun bear is a vulnerable species according to the IUCN Redlist.

The average lifespan for a giant panda in the wild is about 20 years, though some have been known to live for over 30 years.

The giant panda is a vulnerable species, with only about 1,600 left in the wild. Though they are low in numbers, the population is increasing due to conservation efforts[2].

The giant panda is a national treasure in China and is also popular in zoos around the world.

Though they are not the largest bear species, the giant panda is still incredibly strong. They have been known to climb trees and move rocks that weigh over a hundred pounds. Their strength comes from their large size and their bodies being adapted for climbing.

The giant panda’s diet consists mostly of bamboo, which they eat up to 80 pounds every day. They also consume small amounts of meat and other plants.

The spectacled bear is the largest land carnivore in South America, and the only member of the bear family to live on that continent. It is a large animal, with males reaching up to 400 kilograms in weight.

Despite its size, the spectacled bear is also an excellent climber, and often spends much of its time in trees. They also have a BFQ of 103.1.

The spectacled bear gets its name from the distinctive markings around its eyes, which resemble glasses or spectacles. These bears are also known as Andean bears, as they are found in the mountains of the Andes region.

The American black bear is a medium-sized bear found in the forests of North America. These bears are good climbers, and often climb trees in search of food.

American black bears are also good swimmers and fast runners, as they can run up to 25 mph. They have a 99.3 BFQ which represents their biting pressure.

The American black bear gets its name from its black fur, which helps it blend in with the darkness of the forest[3]. These bears are also known as cinnamon bears, due to their reddish-brown fur.

The Asian black bear gets its name from its black fur, which helps it blend in with the darkness of the forest. These bears are also sometimes known as moon bears, due to their characteristic crescent-shaped markings on their chests.

They are the Asian counterpart to the American Black bear.

The Asiatic bear was believed to have a BFQ of around 44, but an updated study suggests 95.6 is accurate.

The polar bear is the largest member of the bear family, and is found in the Arctic region. They have a BFQ of 92.3, putting them at a high spot of bears with the strongest bite pressure.

These massive animals are excellent swimmers and hunt for seals by swimming beneath the ice.

The polar bear gets its name from its white fur, which helps it blend in with the snowy landscape. These bears are also known as nanuk or isbjorn, which means “bear” in Inuit and Swedish, respectively.

The polar bear is categorized as “Vulnerable” by the IUCN Redlist.

The brown bear is a large member of the bear family and is found in Europe, Asia, and North America. These massive animals are excellent climbers, and often climb trees in search of food.

They have a BFQ of 78, though this does depend on the subspecies. Both the grizzly bear, Eurasian brown bear, and Kodiak bear are variations of the brown bear.

The brown bear gets its name from its brown fur, which helps it blend in with the forest.

The sloth bear is a medium-sized bear found in the forests of South Asia. These bears are proficient climbers, and often climb trees to feed on honey and insects. Sloths have a BFQ of 59.9.

The sloth bear gets its name from its slow, deliberate movements, and from the fact that it often hangs upside down from branches, like a sloth. These bears are also known as labiated bears, due to their long, protruding lip.

The pizzly bear is a hybrid of the polar bear and the grizzly bear, and is found in the Arctic regions of North America and Europe.

These massive animals are among the largest members of the bear family, with males reaching up to 1,000 kilograms in weight.

They are also excellent swimmers, and often hunt for fish in the waters around the Arctic.

The pizzly bear gets its name from its hybridization of the polar bear and the grizzly bear. These bears are also known as grolar bears.

The cave bear was a large member of the bear family and was found in Europe and Asia. These massive animals were excellent climbers, and often climbed trees in search of food.

The cave bear got its name from the fact that it was often found in caves. They were also sometimes known as ice age bears, as they lived during an ice age.

The cave bear is an extinct species, due to habitat loss and hunting.

What Is the Strongest Bear in the World?

The strongest bear according to absolute strength is the polar bear. These massive animals are the largest members of the bear family and can weigh more than 2200 pounds (1,000 kg).

Bears are some of the most powerful creatures on earth. They are able to bend open car doors and pry open windshields in search of food. They can also roll over massive rocks and logs with ease. Bears are so strong that they have even been known to kill humans with a single swipe of their paws.

Kodiak bears are the largest of the brown bear subspecies. They’re also among the biggest bears in the world, second only to polar bears in size. Kodiak bears are generally reclusive animals. They prefer to hunt fish in local waterways as far from people as possible.

What Is the Black Bear Bite Strength Based on PSI?

The average black bear bite strength is around 800 PSI. This is much higher than the human bite strength, which is only around 200 PSI. The Kodiak bear’s bite is even stronger, at 1,250 PSI. That’s about the same as a large alligator or crocodile.