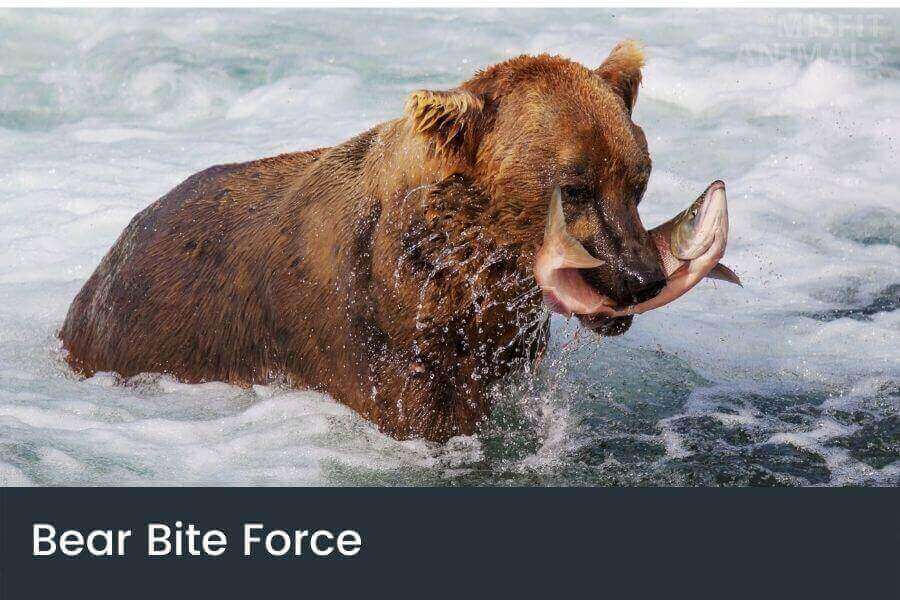 The grizzly bear has a bite force of 1,160 PSI, while the biggest bear, the polar bear, can reach up to 1,200 PSI. Other species, such as the black bear, don’t have as strong of a bite.

Bears are incredibly strong. Not just their limbs and body, but also their jaws and bite. But how strong is their bite really?

Did you know that the grizzly bear has a stronger bite than the black bear? And that the polar bear has the strongest bite of all bears?

In this article, we will take a closer look at the bite force of eight species of bears, and get more into the grizzly bear bite force and polar bear bite force. We will include both PSI and BFQ values, so you can see how they compare.

Beneath is a table of the bite force of different species. There are three metrics to measure bite force:

The polar bear’s bite force is the strongest of all bears. Their PSI value is 1200, and their BFQ value is 92.33. Very few animals have a stronger bite than polar bears.

There’s some debate as to the bite force of different animals. However, it’s believed that gorillas, sharks, jaguars, hippos, and crocodiles have a stronger bite.

The polar bear’s strong jaws are designed to crunch through thick animal skin, cartilage, and flesh in order to access the nutritious fat deposits beneath its food source.

With powerful jaw muscles, they can also eat large quantities of food at once, sometimes up to 15kg (33 lbs). Polar bears are also the most carnivorous of all bears.

Polar bears consume vast amounts of fat as part of their diet; they require high levels of energy from this nutrient in order to survive harsh winters that can last for months on end without any food. Hence, they also need strong bites.[1]

Despite such a strong bite force, polar bears are actually quite gentle animals. They are not known to attack humans unless they feel threatened or their cubs are in danger.

The grizzly bear bite force has a PSI value of 1160 and a BFQ value of 78. This makes its bite slightly weaker than the polar bear, but it is still more powerful than that of most other bear species.[2]

The grizzly bear’s jaws are specially adapted for crushing bones. This is an essential skill when scavenging for food in the harsh environments where these bears live.

They also use their powerful jaws to intimidate rivals and predators (including human beings).

Despite their fearsome reputation, grizzly bears are generally not considered a threat to humans unless they feel threatened or their cubs are in danger.

The American black bear bite force has a PSI value of 650-975 and a BFQ value of 99.3. They’re definitely not the strongest bears, but still quite strong. It should be noted that the black bear is still capable of inflicting serious injuries on an opponent with its powerful jaws.

Black bears eat a wide range of foods, including both plants and animals. They may also forage for food, often searching garbage cans or hunting tiny creatures like rats or insects.

In other words, they’re smaller than grizzly and polar bears, and hence eat smaller prey and more plants. As a result, they don’t have as much use for bone-crushing jaws.

Although black bears don’t have the strongest bite force, they can be quite dangerous when they are startled.

The Asiatic black bear bite force has a PSI value of 650 and a BFQ value of 95.6[3]. This makes its bite force on par with the American black bear.

Asiatic Black Bears are omnivores, and their diet includes both plants and animals. They may also scavenge for food – searching garbage cans or seeking out small prey such as rodents or insects, just like other bears.

The panda bear bite force has a PSI value of 212 and a BFQ value of 151.4. This means that its bite force is significantly weaker than most other bear species, but also that pandas are strong relative to their size.[4]

Pandas eat a wide range of foods, however, they’re particularly fond of bamboo.

Through the year, they’ve evolved teeth and jaws that are suited for the exact purpose of eating bamboo and other tough plants.

As a result, they don’t have strong bites, but they have very durable teeth, perfect for grinding vegetation.

They do still have sharp teeth, as they used to eat meat.

Sun bears are smaller bears, and as a result, they have a weaker bite. However, their BFQ value is very high, meaning they’re strong for their size.

In other words, they may not be able to handle a polar bear, but they’re most likely able to take down anything of their own size.

These small, black bears are omnivores that feed on both plants and animals. They’re also known for their climbing abilities, as they’ll often climb into trees for cover or food.

Sun bears are the best climbers among bears, and can often be spotted resting in trees.

The sloth bear has a Newton value of 795 and a BFQ value of 103.1. This makes its bite significantly weaker than that of the polar bear or grizzly bear.

Sloth bears, like sun bears, are smaller than brown bears, grizzly bears, and polar bears. Hence, they have a bite that resembles a sun bear: not the strongest, but also not weak.

However, that doesn’t mean they’re not strong. They still have very powerful legs and are great climbers.[5]

Although koala bears are not typically thought of as dangerous animals, if they detect danger, they may become defensive.

How Strong Are Bears?

Bears are the biggest predators on land, meaning, they’re incredibly strong. Polar bears can weigh up to 1700 pounds and can bite through bones with a bite force of 1200.

When you think of powerful predators, what comes to mind? Lions? Tigers? Jaguars? Well, how about bears?

The secret to their strength comes from their large muscles and the fact that a large portion of these is attached directly to their backbone.

This allows them to generate incredible amounts of power.

Related: How Strong Are Bears?

How Strong Are Bears’ Teeth?

Bears have a specially adapted skull that allows them to generate an incredible amount of biting power. Their upper and lower jaws are able to move independently of each other, which gives them a crushing grip. This is why they’re able to take down prey much larger than themselves.

Bears also have huge, powerful teeth that are designed to cut through meat and bone. They have large canines that they use to puncture the hide of their prey while ripping it apart with their claws.

The bear’s four long molars are used for crushing bones into pieces so they can be swallowed whole or eaten more easily.

What Bear Has the Strongest Bite?

The polar bear has the strongest bite of all bears, measuring an impressive 1200 PSI. That’s seven to eight times stronger than a human (162 PSI).