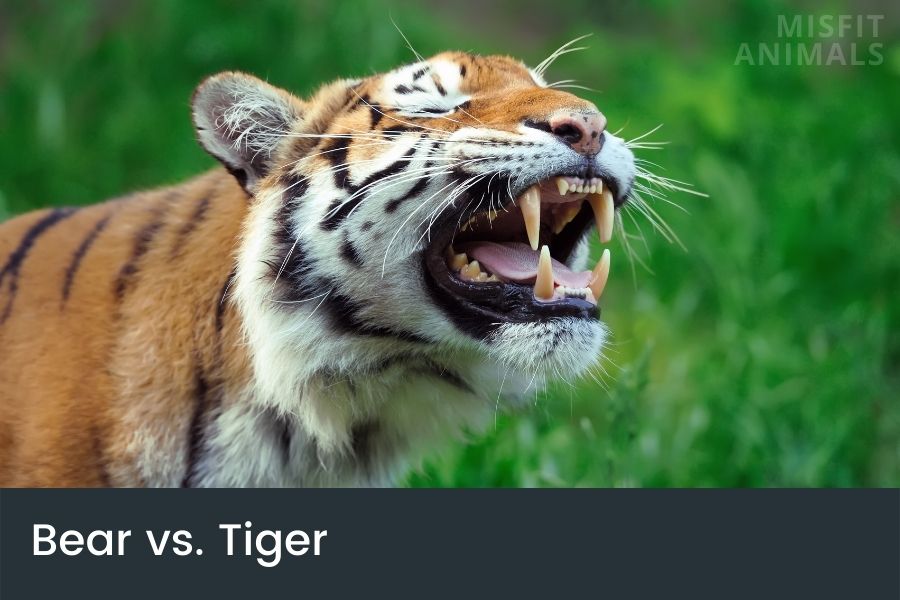 Bears and tigers are two of the greatest hunters in the world. Both are heavy animals, and both are full of raw power.

So what would happen in a fight between a bear vs. a tiger?

There are both some similarities and differences between the two species.

In this article, we will explore those differences and see what would happen if they fought each other. We will be focusing on the Siberian tiger, as this is the biggest tiger species.

It’s important to note that different bears would likely have different outcomes in a fight against a tiger.

Bear vs Tiger: Who Would Win in a Fight?

A polar bear would win in a fight, as they are significantly larger weigh more than a tiger (2-3 times as much). However, the tiger would most likely put up a good fight.

Polar bears are the largest predators on land. They can weigh up to 1,700 pounds (770 kg), they have one of the strongest bites in the world, and their paws and claws are huge.

In terms of physical features, tigers have powerful legs and sharp claws for grasping prey[1]. Polar bears also have those sharp claws though.

Tigers also have a thick coat of fur to protect them from the cold weather, while polar bears have two layers of fur – an inner layer of wool-like hair and an outer layer of long guard hairs.

In terms of aggression, tigers are known to be very aggressive animals that will attack anything that moves when they are hungry or threatened. Whereas polar bears are typically less aggressive and warier of confrontation.

A fight between a grizzly bear and a tiger is up to circumstance. Both animals have very powerful claws and swipes, as well as bites.

Grizzly bears are one of the largest types of bears (behind the polar bear) and can weigh up to 640 pounds (290 kg) – 800 in some extreme cases. They are found in North America and have a thick coat of fur that helps protect them from the cold.

Siberian tigers are the largest of all cat species in the world and can weigh up to 675 pounds (305 kg). They live in Asia and have stripes that help camouflage them.[2]

In general, grizzly bears are much larger than Siberian tigers, so they may be able to overpower a tiger in a fight.

However, tigers are incredibly fast runners and some of the greatest stealth hunters in the world. They’re better suited for killing, which may give them an advantage.

In the end, this matchup would come down to the size of the bear and tiger.

A black bear most likely wouldn’t stand a chance against a Siberian tiger. Tigers are more powerful, more aggressive, and better suited to kill.

There are a few factors to consider when comparing the black bear and the Siberian tiger.

The first is size. Black bears are either smaller than tigers, or just about the same size. Their maximum weight is similar to that of Siberian tigers, about 660 pounds (300 kg), compared to the 675 pounds (305 kg) of a tiger.

Tigers are considered to be the kings of the jungle, but black bears can hold their own in many environments. Black bears have been known to inhabit everything from forests and woodlands to mountains and even swamps.

Both animals are predators, but they hunt different prey. Black bears typically feed on small mammals like rodents or insects. Tigers, meanwhile, prey on large animals such as deer or antelope.

Can a Tiger Take Down a Bear?

Yes, a tiger can take down a bear, though it depends on the species of bear. Larger bears would most likely be a challenge, while small bears wouldn’t be a problem for a tiger.

The polar bear is the largest and heaviest species of bear, while the Malayan sun bear is the smallest.

A polar bear can easily take down a tiger, as they weigh twice as much and are taller. Black bears aren’t as large or strong as grizzlies or polar bears, so a tiger would have a good chance against one.

In general, tigers tend to win these confrontations because of their agility and sharp claws. They’re known as “concealment and ambush hunters”, meaning they usually attack from behind or from the side, going for the throat or chest area.

Tigers avoid attacking frontal areas, as they use the element of surprise to their advantage.

Both animals are incredibly powerful and can cause a lot of damage, but in the end, the tiger is usually the victor.

The main differences between tigers and bears are their general evolution. They’re two different species, evolved from different ancestors. While they’re both predators, there are some key variations in their behavior.

Scientific Classification is the process of naming, describing, and classifying organisms into groups based on their similarities.

This system is used to organize and understand the vast diversity of life on Earth. The five main levels of classification are:

There are generally eight species of bears, with the largest member of the Ursidae family being the polar bear.

Similarly, there are thought to be eight subspecies of tigers, with the largest feline to be the Siberian tiger.

Appearance is one of the main ways in which animals differ from each other. This is how we can identify and differentiate animals.

Bears and tigers are both carnivorous predators[3], but they look very different from each other.

Bears are typically larger and heavier than tigers. They vary in color, but most are brown or black. Tigers are smaller but still large. They have reddish-orange fur, black stripes, and typically a white stomach.

Omnivores have a more diverse diet, while carnivores have a narrower diet. Different animals have evolved the ability to consume and digest different foods according to what’s best suited for them.

Tigers are hunters. They’re built for speed and power, which is why they’re carnivores. Bears are part of the 3% of animals that are omnivores, as this allowed them to find food easier.[4]

While both animals eat meat, there’s also a difference in what animals they hunt.

While bears and tigers have many differences, they also share some behavioral traits, such as their solitary nature, hunting tendencies, and carnivorous diet.

Both animals are solitary by nature, meaning they typically live and hunt alone (with the exception of females and their cubs).

Solitary animals can be vastly different though.

Bears tend to avoid confrontation. While they’re large and very powerful, they keep to themselves most of the time (with some variation depending on species).

Tigers, on the other hand, are very aggressive. If a tiger sees another animal, there’s a good chance it’ll attack. They won’t miss the opportunity of a meal.

Both bear and tiger are hunters. They are both predators that hunt prey to survive. It’s important to note that bears also eat plants, while tigers don’t.

Tigers are large and muscular animals, with sharp claws and teeth. They are excellent hunters and can kill prey that is much larger than themselves.

When they hunt, they’ll sneak up on their prey, hunt it down with their speed, and bite them in the neck and throat to kill.

Siberian tigers are believed to be the greatest ambush hunters in the world.

Bears, on the other hand, are slower than tigers. They have shorter claws and teeth and are not as ferocious as tigers.

When bears hunt, they also attack from behind. Instead of sneaking up on their prey, they tend to hunt it down with their stamina, or simply charge them.

As a bear catches its prey, it’ll use its claws to maul the animal. Deer have often been found with claw marks, mauled and clawed to death by bears.[5] Bear do also use their powerful bite to break the necks of their prey.

Despite their differences, both bear and tiger are hunters and are very effective at catching their prey.

Yes. Tigers will eat any large prey they can catch and kill, including bears. Male tigers will stealthily visit bear dens and feed exclusively on the bear cubs inside.

Tigers are, as said, skilled hunters. But they don’t just hunt adult bears. Much like wolves, they will prey on cubs, as they’re easier to catch and kill.

They also scavenge on carrion, meaning if a bear has been killed by another predator, tigers may come by to feast.

In the wild, tigers and bears will usually avoid each other if they can. They’re aware that an encounter can end in pain and death for both of them.

However, in cases where food is scarce, or one animal encroaches on another’s territory, a fight can break out. As discussed, the outcome largely depends on the species of bear.

Yes, bears may prey on tigers occasionally, though it is rare. Studies suggest that bears will occasionally follow tigers in the hopes of stealing their kills and securing an easy meal.

The two animals eat many of the same animals, hence the two are competitors. A report from 1973 shows how bears may track down tigers, in the hopes of stealing their prey.[6]

When bears kill tigers, it’s largely due to opportunity. A bear that comes across a dead or dying tiger will likely take the opportunity to scavenge and enjoy an easy meal.

When it comes to the bear vs tiger debate, there is no clear-cut answer. The outcome of a fight between the two animals largely depends on the type and size of a bear.

A large bear, such as a polar bear or grizzly bear, would be able to take down a tiger. However, the Siberian tiger has also been recorded killing and eating grizzly bears and brown bears.

In general, tigers are considered ferocious animals, while bears are typically larger. Bears are also known for their strength, stamina, and aggressive behavior when provoked.

So although tigers may have an edge in some cases, bears can definitely hold their own in a fight.