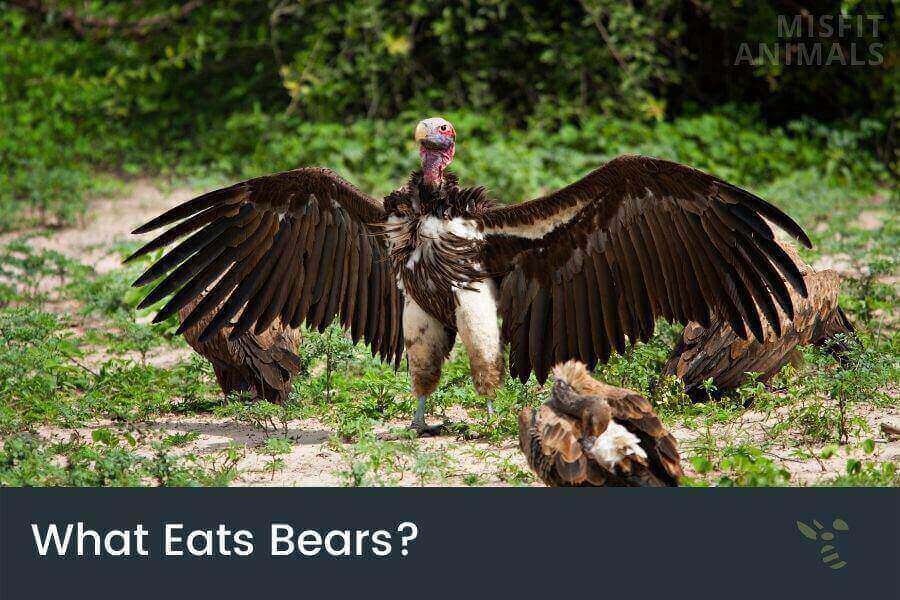 Animals that can eat bears include wolves, cougars, coyotes, bears, tigers, cultures, and other scavengers. As they’re on top of the food chain, they don’t have many natural enemies.

Bears have few enemies, as they are apex predators. However, there are other apex predators who live in the same territories that occasionally eat bears.

But what are the most common bear predators?

In this article, we will explore the different natural enemies of bears, what each of these animals eats,  and how they hunt down their prey.

The most common bear predators include:

Wolves are apex predators. They live in packs and prey on deer, elk, and other large animals. It does occur that wolves hunt down bears, but it’s not a common sight, as wolves are aware of bears’ strength and power.

Wolves and bears see each other as competitors. They compete for much of the same foods, including small mammals, ungulates, and animal remains.

Most wolf-bear encounters are related to food.

Bears are most at risk of being eaten by wolves when they are cubs. Wolves are often seen harassing bear cubs[1]. Bears will sometimes try to scare packs of wolves away by standing up and growling.

While cougars typically don’t eat bears, they may do so at times. They’ll eat pretty much anything, including deer, elk, sheep, and smaller prey such as raccoons or beavers. Bears typically aren’t part of their diet, but they may prey on cubs or bear carcasses.

Cougars can be found throughout North America’s forested regions and at do times even venture into suburban areas. They’re also known as mountain lions or pumas, but whatever you call them they’re always hungry.

These predators hunt by stalking their prey until close enough to attack with a powerful leap, often from behind, to avoid being detected.

Coyotes are a common sight in many parts of North America, and they often coexist with bears. They’re scavengers and hence take part in carrion-eating.

While coyotes are not generally considered to be predators of bears, they will opportunistically prey on young or injured bears, as well as scavenge the remains of kills made by other predators.

Coyotes also compete with bears for food sources such as carrion, small mammals, and fruits and berries.

When coyotes hunt, they typically do so alone. Hence, they’re not strong enough to take down an adult bear. This is one of the reasons why coyotes rarely ever eat bear meat.

There are several species of bears that live in the same area. The typical bears seen in North America include:

All bears are omnivores, and hence do eat meat. As they’re cannibalistic, they do also eat other bears, whenever the opportunity presents itself.

Grizzly bears, brown bears, and polar bears are the most likely to take part in this behavior, as they are the largest. Black bears don’t stand much of a chance against other species, as they’re much smaller in size.

Polar bears are very rarely eaten by other animals, as they’re the only predators in the Arctic regions.[2]

Tigers are some of the most feared predators in the animal kingdom. They are apex predators, meaning they have no natural enemies. This makes them very dangerous to other animals, including bears.

Tigers mainly eat large prey, such as deer and wild boars[3], but they will also eat smaller prey if it is available. Additionally, they have even been known to eat bears on occasion, though these animals rarely encounter each other.

This can be a dangerous situation for the bear, as tigers are both stronger and faster.

Bears have several strategies for dealing with tigers. One is to avoid them altogether. If there is a tiger in the area, bears will usually stay away from their territory.

Another strategy is to intimidate the tiger. Bears will make loud noises, stand up on their hind legs, and act aggressively towards the tiger.

Where other bear enemies may prey on them, vultures only eat bears when they’re dead. Vultures are scavengers and primarily eat carrion (dead animals).

These large birds of prey feast on the carcasses of dead animals, including bears.

Vultures are scavengers and as such play an important role in the food chain. They help to clean up the landscape by eating the carcasses of dead animals. This helps to prevent the disease from spreading, as well as cycle nutrients back into nature.

Apart from vultures and coyotes, other scavengers also take part in eating off of a dead bear carcass, such as eagles, hawks, foxes, and more.

This is a natural process that helps to clean up the environment and recycle nutrients back into the earth.

It’s an important part of the ecosystem and something that should be appreciated.

Humans are at the top of the food chain[1]. Humans are the ultimate apex predators. We’ve hunted animals for more than 2 million years, which is why wild animals keep their distance.

Apart from hunting, humans also kill wild animals through climate change, destruction of habitat, and pollution of the environment.

It’s long been a tradition in North America to eat bear meat, from natives to settlers. People eat both black bears, grizzly bears, and all other species. While some people describe the meat as very chewy, others describe it as tasting.

The biggest threat to bears is human beings. It’s our trash that kills more than 100 million marine mammals each year including dolphins, seals, and sea lions. It’s our hunting that has to lead to the endangerment of many species and it’s our climate change that is melting their habitats.

How Do Bears Defend Themselves?

Bears defend themselves with their sharp claws, teeth, and overwhelming strength. They’re large animals and can take on almost any opponent in a fight.

Bears are apex predators, meaning that they have no natural enemies besides humans. They are large and strong and have sharp claws and teeth which help them defend themselves against other predators.

In some cases, bears will bluff when they feel threatened, pretending to be more aggressive than they really are in order to scare off potential predators. If that doesn’t work, they may attack or try to escape.

Related: Are bears afraid of dogs?

Polar bears have no natural predators, hence they aren’t preyed upon by any. However, they may still be killed by walruses in the arctic areas, or by wolves when they migrate southward.

Humans are also a threat to polar bears, as they often hunt them for sport or fur.

Grizzly bears have no natural predators, but they are eaten by other animals. The most common animals that eat grizzly bears include wolves, cougars, tigers, coyotes, and humans.

Vultures are also predators of grizzly bears, but they typically scavenge off of the remains of other predators’ kills.

Pandas are rarely preyed upon by other animals, though jackals and snow leopards are their most common predators.

Humans are also a threat to pandas, as they often hunt them for sport or sell them into captivity.

Bears may be apex predators but they don’t have many enemies. Other than humans, there are a few other animals that eat bears from time to time: wolves, cougars, coyotes, vultures, and tigers are among the most common.

Do bears have predators?

No, bears don’t have any natural predators, but that doesn’t mean they’re not hunted or eaten by other animals. Several carnivorous and predatory animals occasionally feed on bear meat.

What eats bears in the forest?

Wolves, foxes, and different birds of prey eat bears in the forests. All carnivores can in theory eat bears, as long as the bear is dead.