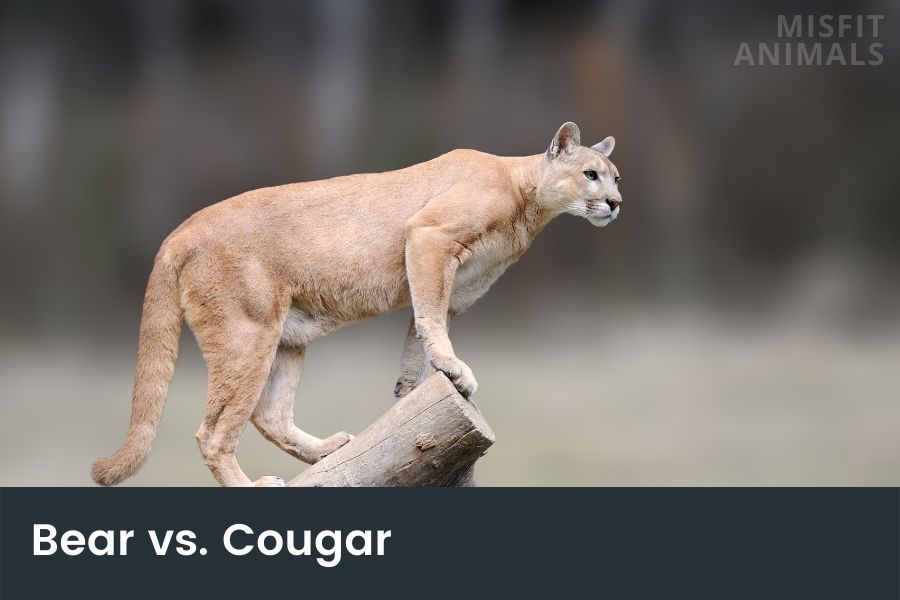 A bear would beat a cougar in a fight. They’re larger, more powerful, and can generally take down almost any other animal. Cougars don’t stand much of a chance.

However, there are some similarities between the animals.

In this article, we’ll take a look at bears vs. cougars, compare their appearance, build, diet, and general behavior, as well as take a look at who’d win in a fight.

In other words, cougars are cat-like carnivores, while bears are their own subgroup.

Cougars are part of the genus Puma, while bears are in the genus Ursus. As a result of being two different species, the two animals also have different chromosome numbers. A bear has 78 chromosomes, while a cougar has 38 chromosomes.

Bears are generally larger than cougars. They’re bulkier of nature, whereas cougars are slender, cat-like creatures. Their difference in build also results in differences in mobility.

When you look at a bear and cougar, the first thing you’ll probably notice is their size.

Bears are generally larger and heavier. While cougars weigh about 140 pounds, bears can weigh up to 1700 pounds.

As a result of their smaller build, cougars have more maneuverability. Cougars are known as “ghosts of the forest” because they’re so good at hiding. They can blend in with their surroundings well, and move around very silently.

Bears have longer fur than cougars. Their fur can be black, brown, or blonde. Cougars have long reddish-brown hair with black tips on their tail and ears.

As bears are omnivores, it allows them to easily find food, which aids them to survive in a wider variety of habitats. They are opportunistic feeders, meaning that they will eat whatever is available to them at the time.

This can include small animals, insects, fruits, and berries.[1]

Cougars are carnivores, meaning that they only eat meat. Their diet consists mostly of small mammals or small ungulates, such as deer, rabbits, and raccoons. They will also eat birds, lizards, and snakes.

Cougars are ambush predators, meaning that they stalk their prey before attacking. This allows them to take down prey that is much larger than themselves, as they use the element of surprise to their advantage.

Although bears and cougars both eat meat, they have different hunting strategies:

Another difference between bears and cougars is their habitats. Cougars live in forests, grasslands, and mountainous areas, while bears can be found in forests, tundra, alpine meadows, and even desserts.

There are a few similarities between bears and cougars, such as their solitary nature, and the fact that they’re both hunters. Aside from that, these animals are vastly different.

Solitary animals are those that live alone.[2]

Bears and cougars are both animals that are often considered solitary, but there are some key differences between them.

Cougars are solitary by nature. They don’t typically form groups, and the only time they come together is to mate.

Bears, on the other hand, are not as solitary as cougars. Bear cubs stay with their mothers for two years or more, while cougar kittens leave their mothers after about six months.

Both bears and cougars are hunters. They both rely on their hunting skills to survive.

Bears are opportunistic feeders, meaning that they will eat whatever is available to them at the time. This can include small animals, insects, fruits, and berries.

Cougars are ambush predators, meaning that they stalk their prey before attacking. When they attack, they pounce on their prey.[3]

Both bear and cougar cubs learn how to hunt from their mothers. Cubs start by playing with their mothers and learning how she hunts. As they get older, they accompany her on hunts until they are old enough to go out on their own.

Bear vs Cougar: Who Would Win In A Fight?

A Polar Bear would beat a Cougar in a fight. A male polar bear can weigh over 1700 pounds while an adult male cougar only weighs about 140 pounds.

Polar bears are also more powerful in terms of raw power. They can kill prey with a single swipe of their paws, on which they also have very sharp claws.

However, polar bears can’t climb trees, as cougars can. If they’re ever to cross paths, a cougar can simply run into a tree to get away from the bear.

A Grizzly Bear would beat a Cougar in a Fight. They’re larger and contain more power in their bodies. Grizzlies also have a much thicker skull and neck than cougars, which gives them an advantage in head-to-head combat.

While both species have very powerful jaws with two large canine teeth used for killing prey, grizzly bears are simply too large for a cougar to take down.

Both animals are apex predators, meaning they don’t have any natural predators that hunt them. They’re confined to fighting amongst each other.

A cougar will most often beat a black bear in a fight. In terms of raw power, there really isn’t much difference between these two animals – both are incredibly strong for their size.

However, when it comes to fighting ability, the cougar has a clear advantage. Black bears may be larger, but they aren’t as quick or as deadly as cougars.

Cougars are incredibly agile, while black bears are bulkier. Both animals have sharp claws and teeth that can inflict serious damage.

However, a black bear can get very large. The biggest individuals can weigh upward of 600 pounds, which can be enough to take down a cougar.

Can a Cougar Take Down a Bear?

Cougars typically can’t take down bears, as they are generally larger, stronger, and heavier. However, cougars are agile and quick, which could give them an advantage in a fight against a smaller bear, such as a black bear.

It is difficult to say for sure who would win in a fight between a bear and a cougar. They are both powerful predators, and it would likely be a close battle.

As mentioned earlier, cougars can’t take down polar bears or brown bears, but they have a shot against smaller bears.

In the end, it may come down to the individual animals’ strength and agility. Whichever animal is able to use its strengths to the best effect is likely to come out on top.

A bear would win in a fight against a cougar most of the time. They are generally larger and heavier than cougars. They also have more powerful muscles, which they use to their advantage when hunting.

There are many differences between the two animals, such as their appearance, diet, and hunting technique.