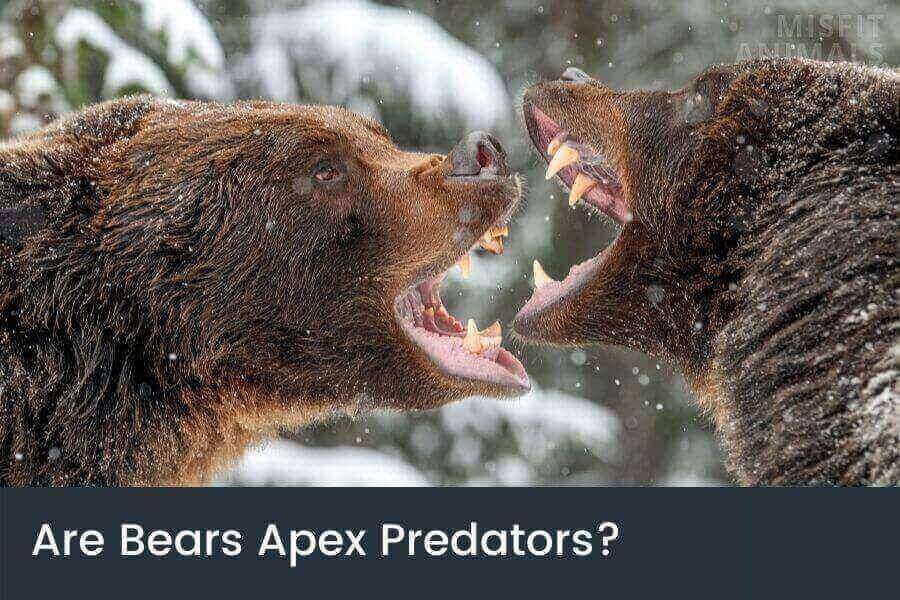 Do you know what an apex predator is?

People often confuse an apex predator with a predator, but there’s an important distinction: their position in the food chain.

Bears are omnivores, meaning they eat both animals and plants. Hence, they do hunt. But are they apex predators?

In this article, we’ll discuss bears’ position in the food chain, whether they’re apex predators or merely predators, and discuss some of the apex predators that may prey on bears.

What Is an Apex Predator?

An apex predator is an animal that’s on top of the food chain, meaning no animals prey on them. Bears are apex predators.

Apex predators are typically very large and powerful animals that have few natural enemies and no natural predators. A classic example of an apex predator is a shark, as well as lions and tigers.

Apex predators play a vital role in the ecosystem by keeping prey populations in check.

When top predators are removed from the equation, prey populations can quickly spiral out of control, which can disrupt the balance of the entire ecosystem.

Difference Between Predator and Apex Predator

The difference between a predator hence isn’t whether they hunt other animals, but whether they’re hunted themselves.

A predator is an animal that hunts and kills other creatures for sustenance. Lion’s hunt zebras, which they feast on. It has keen teeth and claws to kill its victim, yet it has strong legs to outrun it.

Yes, bears are apex predators. They have no natural predators, though this doesn’t mean other predators don’t eat bear meat. Bears are at the top of the food chain.

Bears fulfill the criteria for apex predators. They’re large animals, they have sharp teeth and claws for killing, they can enter active hunting mode (they search for prey), and have sharp teeth for tearing off the flesh.

Grizzly bears are apex predators, meaning they are at the top of the food chain in their environment.

When they hunt, they primarily prey on ungulates such as deer, elk, and moose. However, grizzlies will also eat smaller animals such as beavers, rabbits, and fish.

In some cases, grizzlies have been observed killing adult wolves or cougars.

This makes them one of the most powerful predators in North America. It’s important to remember that while grizzlies are apex predators, they are still susceptible to predation by humans or other apex predators.

Yes, polar bears are apex predators. They are skilled hunters that prey on a variety of animals, including seals and walruses.

Polar bears are opportunistic predators, which means they will eat whatever is available to them. Their diet consists mostly of seals, but they will also eat fish, walruses, beluga whales, and caribou.

The polar bear’s size and strength make it one of the most feared predators in the Arctic. It’s also the largest predator in its habitat.

Polar bears stand out amongst bears, as they almost exclusively feed on meat, whereas other bears feed on plants as well.

Yes, black bears are apex predators. They are masters of their environment and can survive in a variety of habitats.

Black bears are omnivores, which means that they eat both plants and animals[2]. Their diet includes everything from berries and insects to moose and deer.

Black bears are also one of the few predators who will hunt down porcupines, something most people wouldn’t think to do.

Apex predators are important for maintaining balance in an ecosystem. When black bears are removed from an area, it can have serious consequences for the rest of the wildlife.

What Animals Do Bears Prey Upon?

Bears prey on a variety of animals, largely depending on the species of bear. They prey on small mammals, rodents, ungulates, fish, insects, and birds.

Bears have a varied diet. They aren’t picky eaters and will eat what’s available, including dead animals.

They like berries, honey, and small animals like rodents or fish. However, they will eat larger prey if available, such as deer, elk, moose, bighorn sheep, and caribou.

Bears are fierce predators that can take down larger creatures. This makes them a top North American predator. Few animals dare to hunt with a bear.

This gives bears a huge territory to roam and hunt for food.

Even though bears are apex predators, they’re still eaten by other animals. Here are a few of them.

Wolves are one of the animals that are known to prey on bears.

Both wolves and bears are considered apex predators, meaning they are at the top of the food chain and no other animals prey on them (aside from other predators).

Wolves are opportunistic hunters and will eat whatever is available to them. Their diet consists mostly of deer, but they will also eat elk, moose, beaver, and rabbits.

One of the animals that can be observed eating bear meat, even though it’s rare, are tigers.

Tigers are the largest members of the cat family and are found in Asia. They are very powerful animals and can prey on bears.

As they live in Asia, they’ll primarily be seen eating Asiatic bear species, such as the Asiatic black bear.

Cougars are another apex predator that is known to eat bears. They are the largest wildcat in North America and are very powerful predators.

Despite their size, cougars are also very agile and can climb trees with ease.

They mainly prey on deer but are known to take down prey much larger than themselves, including bears. While they can’t take on a grizzly bear, they can take down a black bear.

Cougars are solitary animals and live in remote areas, so encounters between them and black bears are rare. When encounters do happen, the cougar is usually the victor.

Scavengers are animals that eat the remains of other animals[3]. They are not predators, because they don’t kill their prey. Instead, scavengers eat the carcasses of dead animals.

This makes them an important part of the food chain because they help recycle nutrients back into the environment.

Bears are also scavengers and have been observed eating the remains of other bears.

Bears are apex predators, meaning that they are at the top of the food chain. Hence, they have very few natural enemies. The only other animals that prey on bears are other apex predators, such as wolves, tigers, or cougars.

This makes them very important in their ecosystems, as they help to keep populations of prey animals in check.