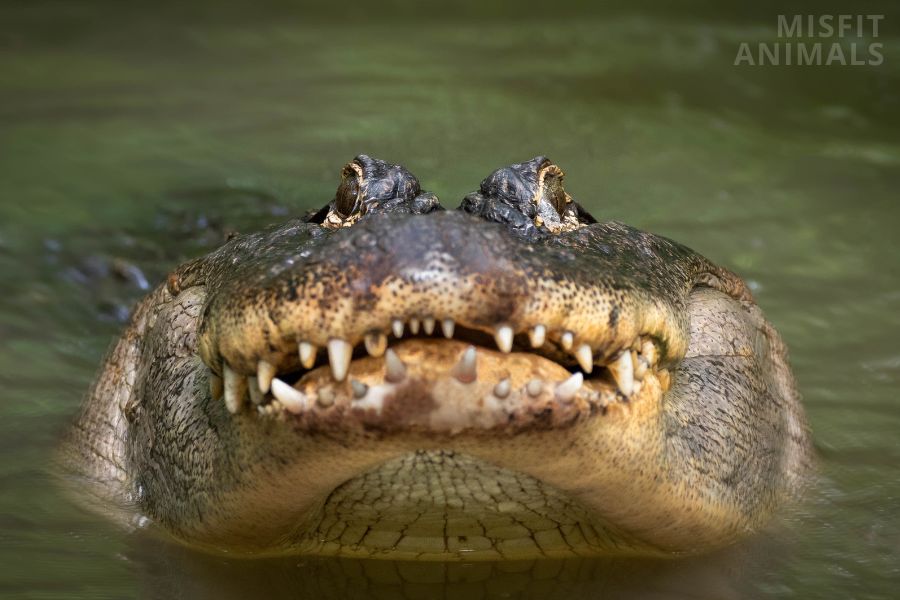 Apex predators include big cats, crocodiles, killer whales, bears, birds of prey, large snakes, and more. They are rulers of the wild and are extremely deadly.

There are millions of animal species living in the world. All of them make up a part of the food chain. Some of them are small and weak. Some of them are built differently and are able to become the kings of nature.

Animals live in nature belonging to one of two categories – prey or predator. Predators are reliant on hunting other animals for survival and have to be strong and tough.

This article lists the top 15 apex predators found in the world.

What Is an Apex Predator?

The natural order of animals in the wild is known as the food chain. This chain is made up of animals that hunt each other.

At the bottom of the food chain, we have detritivores and decomposers. These only eat microscopic organisms. These are the weakest animals.

Below is a list of some of the well-known apex predators.

The lion is one of the most well-known big cats in the world. It is a symbol of royalty and strength. These cats are apex predators living in the savanas, where they hunt ungulates and other herbivores.

Lions have often been dubbed the kings of the jungle. They are large at around 73 to 82 inches in length and have a strong bite force.

As true apex predators, they have no predators and sit at the top of the food chain.

Lions are a threat to each other which is why they live in groups (called a pride). This helps them protect their pride from other lions who want to kill their cubs or steal their food.

Wolves are one of the fiercest predators in the world. They are at the top of the food chain in the forest but are significantly smaller than some of the other animals on this list.

Wolves are highly territorial and live in packs. A wolf pack has different roles, including an “alpha” who is the breeder of the pack.

A single wolf can easily be taken down by other large animals, such as a bear, but the combined force of a pack of wolves is deadly.

Orcas, or killer whales, are one of the largest predators in the world. They are the biggest member of the dolphin family, Delphinidae, and have black and white markings on their bodies.

Killer whales have no natural predators and prey on many types of animals:

They are extremely intelligent and hunt their prey using echolocation[1]. They have an average length of around 26 feet and can weigh more than 12,000 lbs.

Orcas need more than 300 lbs. of food every day and have an average lifespan of around 50 to 70 years.

Orcas are the second largest apex predators found in the oceans after sperm whales. On some occasions, they have been seen hunting blue whales, which are significantly larger than them.

Eagles are the masters of the sky. They are large carnivorous birds with talons and sharp beaks that help them hunt for food.

Bald eagles are one of the largest birds of prey found in the world. They are native to North America and have a wingspan of up to seven feet.

Bald eagles are extremely aggressive and even kill other eagles out of spite. They are also opportunistic eaters and eat whatever prey they can find. Fishes are one of the most common prey of bald eagles.

They can spot a fish swimming in the water from the sky and make a quick dive into the water to catch it. Their ability to hunt skillfully makes them apex predators.

Saltwater crocodiles are the largest reptiles in the world. They are found in Southeast Asia, Northern Australia, and some parts of India. They can reach an average length of 20 feet and weigh around 2,200 lbs.

Due to their large size and killing abilities, saltwater crocodiles have no predators. They eat anything they can get their hands on, including fish, birds, mammals, and other reptiles.

They live in brackish waters near the coasts and can live for more than 70 years.

Saltwater crocodiles have been known to attack humans occasionally.[2]

Tigers are the largest cat species in the world. They are known for the black stripes on their orange fur.

Tigers are classified as endangered by the IUCN due to their habitat destruction and deforestation[3]. India hosts one of the largest populations of tigers in the world.

They are solitary cats and hunt alone for most of their lives.

Grizzly bears are a type of brown bear native to North America. They are the second largest terrestrial predator in the world after the polar bear. Male grizzly bears have an average length of around 7 to 8 feet and weigh up to 790 lbs.

They are omnivores and eat both plants and animals.They eat salmon, mushrooms, moose, elk, small mammals, berries, herbs, and fruits.

They are quick despite their size and can run at speeds of up to 35 miles per hour. They are also highly aggressive and have been known to attack humans.

Polar bears are the largest terrestrial apex predators in the world. Male polar bears can weigh more than 1,500 lbs.

Polar bears hunt seals and walruses or even scavenge dead whales if possible.

They are native to the Arctic circle and the surrounding land masses. Alaska, Greenland, Russia, and Canada are the most common places to find them outside the pole.

Endemic to the islands of Indonesia, the Komodo dragon is the largest lizard species in the world. They can grow up to 10 feet long and weigh as much as 150 lbs.

Their size and venom make them one of the deadliest predators in Indonesia.

Komodo dragons hunt deer, snakes, water buffaloes, birds, and any other animal they can catch. They are venomous and can deliver a nasty poison to their prey. Once their prey is bitten, it can take some time for the poison to set in.

Komodo dragons follow their wounded prey until it collapses due to poison.

Anacondas are a type of non-venomous snake. They are native to South America and are classified into four subspecies:

The green anaconda is the heaviest snake species in the world. They have an average length of up to 29 feet and weigh around 550 lbs.

Green anacondas are non-venomous constrictors which means that they kill their prey by suffocating it. Their prey usually includes deer, but they have been known to attack jaguars in the region.

Jaguars are big cats native to South America. They inhabit thick rainforests and hunt their prey at night. These cats are masters of stealth and stalk their prey before ambushing it.

Jaguars are the third largest cat breed in the world after tigers and lions.

They have yellow or tan spots with black linings making rosettes. This coat gives them the ability to camouflage in the wild and view their prey without getting noticed.

Jaguars are excellent swimmers and live near bodies of water. They have extremely powerful legs and bite force which allows them to hunt their prey and fend off any attackers.

Sharks are an obvious choice for apex predators. They are large marine carnivores that hunt small fishes, crustaceans, and mollusks.

There are more than 500 species of sharks swimming in the oceans around the world. But of them all, the great white shark is one of the largest shark species in the world. They can grow up to 20 feet in length and weigh up to 5,000 lbs.

Great white sharks are apex predators and have only one occasional predator, which is the orca. They are classified as endangered due to habitat loss and pollution.

They have around 300 teeth of 2.4 inches in length. They are arranged in several rows making their bite one of the deadliest in the world.

Spotted hyenas are the largest hyena species in the world and are native to sub-Saharan Africa. They are also called laughing hyenas due to their distinctive sound.

Spotted hyenas live in groups called clans and are excellent hunters. They hunt in packs and surround their prey completely.

Male hyenas leave their clans after their birth, while females stay in the group for life.

The largest toothed whale in the world, the sperm whale is the largest predator in the world. They have an average length of around 52 feet, with a third of their body occupied by their heads.

Sperm whales have the largest brain in the animal kingdom and are apex predators. They can live for more than 60 years and give birth after every two to four years.

Sperm whales eat squids, fish, sharks, and rays. Young sperm whales sometimes become prey to groups of orcas, but the adult males are too big for killer whales to attack.

Alligators are large reptiles found in two areas of the world. The Chinese alligator and the American alligator are the only two subspecies of alligators.

American alligators are common to the Southeastern United States and reach an average length of around 15.6 feet. Their body weight is more than 2,200 lbs.

They hunt by submerging themselves in water and waiting for their prey to approach them.

Once the prey comes closer, they use their powerful jaws to snap it in their mouth. American alligators have been known to put sticks and twigs on their heads to attract birds.

All animals are part of the food chain in which the apex predators sit at the top. These predators do not have any natural predators of their own and hunt other animals for their food.

Bears, killer whales, birds of prey, and big cats are some of the most well-known apex predators in the world. Some apex predators on their native lands are due to the absence of other predators, such as the remote location of the Komodo dragon.

What Is the Top Ocean Predator in the World?

Sperm whales are the top ocean predator in the world. They hunt giant squids, octopi, colossal squids, sharks, and demersal rays. They use echolocation to target their prey and use their size and speed to attack it.

No, hippos are not apex predators. Predators are animals that hunt other animals for food. Hippos are herbivores and eat plants for their nutrition. They do not hunt or eat meat which is why they are not considered predators at all.

Yes, eagles are apex predators. Most eagles are large and do not have any predators. They glide in the skies and live high up from the ground, keeping their young safe from other predators.

Yes, bears are apex predators. They are one of the largest animals on land and have no predators of their own. Polar bears are the largest bear species that live near the Arctic Circle.