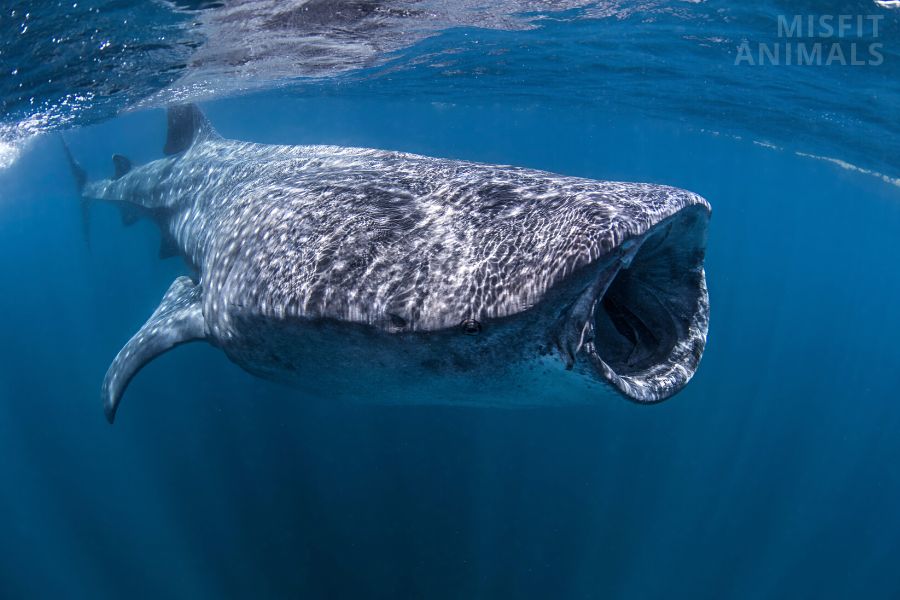 The animal kingdom is full of extraordinary creatures, both big and small. While there are some large animals on land, the largest animals live in the oceans.

An animal’s weight depends on a lot of factors:

This article lists the 15 heaviest animals inhabiting this world.

Whales are aquatic mammals belonging to the order Cetacea. The top ten heaviest animals in the world are all whales.

Out of all whales, blue whales are the largest and heaviest. They are also the largest animals on earth.[1] They have a maximum recorded length of around 98 feet and weigh up to 196 tons.

While they were once terrestrial animals, whales returned to the sea millions of years ago.

Blue whales are a type of baleen whale that lacks teeth. They have keratin fitters in their mouths which help eat small krill.

A blue whale’s tongue weighs more than an adult elephant. They are found in all parts of the world, hunting near the polar regions during the summer and migrating to the warmer waters during winter for mating.

Fin whales are the second longest and heaviest animal in the world after blue whales. The average length of a fin whale is around 89 feet, while the average weight is around 73 tons.

As baleen whales, they feed on schooling fish, krill, copepods, and squids. They have long slender bodies and are found around the world except for the polar ice caps.

Fin whales are classified by the IUCN as vulnerable due to whaling. [2]

Sperm whales are the largest toothed whales in the world and the third heaviest animal. The average length of a sperm whale is around 60 feet, with some males reaching as much as 68 feet. They weigh around 79 tons and live for more than 70 years.

They are found in oceans across the globe and migrate due to breeding and feeding.

Females and young males live together in large groups, while adult males roam individually in the seas.

Sperm whales are notable for having the largest brain in the world. Their head makes up around one-third of their body length.

They do not have any natural predators due to their size, but their young are occasionally hunted by killer whales.

Whale sharks are the largest known species of fish in the world. They have an average length of 59 feet and weigh up to 20 tons.

Whale sharks are filter feeders, primarily feeding on plankton and small fishes. They have “whale” in their name due to their size and feeding habits, which resemble baleen whales.

With around 300 to 350 rows of teeth, these sharks have a strong bite. Their mouths can expand to up to one meter in width.

They are found in waters around the equator and are classified as endangered by the IUCN.

Elephants are the largest terrestrial animals in the world. They are found in Africa and Asia, living in jungles and forests.

There are three species of elephants:

Female African bush elephants have the longest gestation period for any mammal at around 22 months. They travel in herds along with young males while the adult males are left alone to wander in the wild.

Herds of females only interact with the males during the breeding season.

They are herbivores and eat plants, bark, fruits, and grass. They are classified as endangered by the IUCN due to habitat destruction and poaching.

Asian elephants once lived in several parts of Asia but are now limited to the Indian subcontinent and Southeast Asia. They are sexually dimorphic, with the bulls being significantly larger than cows.

They are also classified as endangered by the IUCN.

There are five species of rhinoceroses found in the world, with the white rhinoceros being the largest. The average length of a white rhino is around 11 to 13 feet. Their weight ranges from 3,700 lbs. to 5,000 lbs.

Rhinos are odd-toed ungulates having one or two horns and strong folded skin.

White rhinoceroses have large mouths, which they use for grazing. They have a large body, short neck, large head, and broad chest.

They also have two horns on their snout, with the front one being larger at 24 inches on average.

Elephant seals are large earless seals. They are named so due to the male’s distinct nose that swells during the mating season.

Male elephant seals have a length of up to 16 feet and weigh around 4,500 lbs. The females are significantly smaller at around 10 feet and weigh up to 2,000 lbs.

They are also the largest carnivorans in the world and are sexually dimorphic.

Giraffes are the tallest animals on land. They reach heights of up to 18 feet and weigh up to 4,200 lbs. They have short bodies but long legs and necks.

A giraffe’s long neck, along with its 21-inch tongue, helps it eat leaves from tall trees.

They are members of the family Giraffidae and have three distinct characteristics:

Hippopotamuses are large semiaquatic mammals known for their large gape. Hippos have an average length of 11 feet and weigh more than 4,000 lbs.

Despite their short legs and weight, hippos can run at speeds of up to 19 miles per hour. They are highly aggressive and do not welcome intruders.

They are native to sub-Saharan Africa and are classified as vulnerable by the IUCN.

Hippos spend most of their lives underwater and come out at night to feed. They are herbivores and eat grass and fruits.

Asian gaurs are bison native to South Asia and Southeast Asia. They are one of the largest species of wild cattle in the world.

They usually live in evergreen forests and are herbivores. Both males and females of this species have horns.

Adult black rhinos have a body length of 10 to 12 feet and weigh around 1,700 to 3,000 lbs. Like all rhinos, black rhinoceroses have horns that they use to fend off predators and attackers.

Black rhinoceroses are a species of rhinoceros native to Africa. Their colors vary from gray to brown. They are classified as critically endangered by the IUCN.

They are herbivores and eat grass, leaves, shoots, branches, and fruits.

They live in mangrove swamps, where they hide and stalk their prey underwater.

Saltwater crocodiles are opportunistic carnivores that feed on anything they can get their hands on. They ambush their prey and devour it whole. Their diet usually consists of crustaceans, reptiles, birds, mammals, and amphibians.

Bison are the largest terrestrial animals in North America and Europe. They are broad and muscular with long coats. The average length of a bison is around 10 feet, and its weight is up to 2,200 lbs.

Bison are even-toed ungulates and resemble true buffalo and cattle. They also have sharp curved horns of around 25 inches in length.

Polar bears are the largest terrestrial predators, native to the arctic region. The average length of a male polar bear is around 7 to 9 feet, while that of a female is around 5 to 7 feet. Polar bears weigh an average of 550 to 1,500 lbs.

Polar bears are closely related to brown bears and spend most of their lives on ice caps.

They are classified as marine mammals due to their dependency on sea ice, which also makes them vulnerable to climate change and habitat loss. [3]

Polar bears have more elongated bodies and noses than other bear species. They are also excellent swimmers capable of swimming continuously for days.

The world is full of animals of all shapes and sizes. The largest is usually the heaviest, but that is not always the case. The heaviest animals in the world are mostly whales due to their sheer size and lengths.

Many of the heaviest animals are herbivores and pose no danger to humans. Some animals, such as polar bears, saltwater crocodiles, and elephant seals, can be a threat which is why they must be avoided.

What Is the Heaviest Animal on Earth?

Blue whales are the heaviest animals on earth. They weigh up to 196 tons and live for as long as 90 years. The average length of a blue whale is around 98 feet.

What Is the Heaviest Land Mammal?

The African bush elephant is the heaviest and largest land mammal. They are native to sub-Saharan Africa and live in herds. The average height of these elephants is 126 inches, and their weight is around 10 tons.

What Is the Heaviest Flying Bird in the World?

The great bustard is the heaviest flying bird in the world. The males of this species weigh around 20 to 44 lbs. while the females are significantly lighter at around 8 to 18 lbs. Their wingspan is up to 8 feet long.