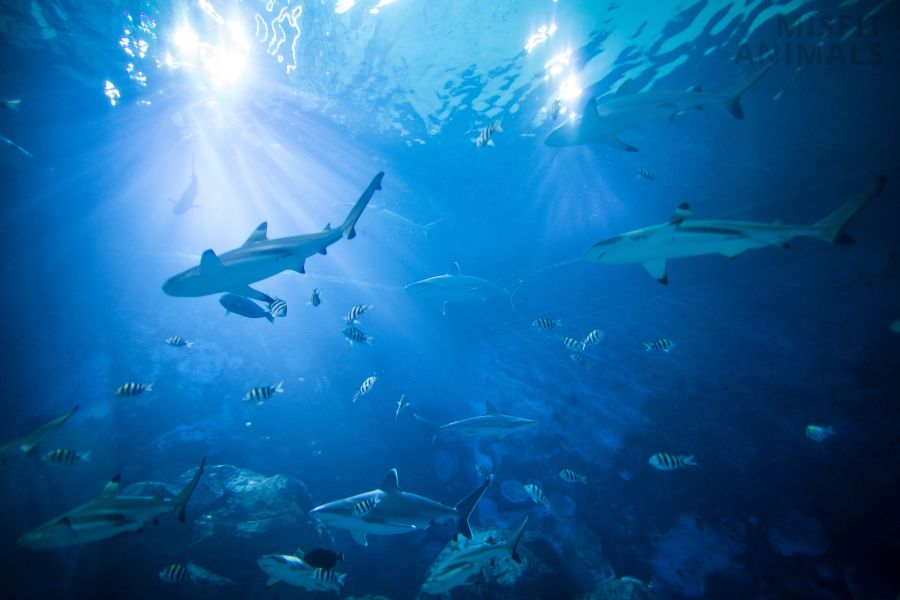 We all know that the world is full of beautiful animals, but when it comes to sea creatures, they often get overlooked.

With this list, we hope to change that by showcasing 10 of the most stunning marine animals out there.

From the playful dolphins to the shy seahorses, these creatures are sure to take your breath away. So if you’re looking for a little bit of aquatic beauty in your life, be sure to check out our list!

There are many different types of sea animals, from the largest whales to the smallest plankton. Here is a list of the sea animals around the world:

Orcas, also known as killer whales, are the largest member of the dolphin family. Orcas are apex predators, meaning they sit at the top of the food chain and have no natural predators.[1]

Orcas are found in all oceans, from the frigid Arctic to warm tropical waters. They are very social animals, living in pods of up to 40 individuals. With high intelligence, they are known to use tools, communicate using complex vocalizations, and even teach other orcas new behaviors.

They are one of the most endangered animals in the world. Orcas are threatened by pollution, overfishing, and habitat loss.

Lion’s Mane Jelly Fish is the largest of all jellyfish. Their scientific name is Cyanea capillata. These Jelly Fish are found in cold waters all over the world.

Lion’s Mane Jelly Fish feed on small fish, plankton, and other marine animals. They use their stinging tentacles to capture prey. While they aren’t poisonous to humans, their sting can be painful.

The humpback whale (Megaptera novaeangliae) is a species of baleen whale. One of the larger rorqual species, adults range in length from 12–16 m (39–52 ft) and weigh around 25–30 metric tons (28–33 short tons).

The humpback has long pectoral fins, a distinct ridge running along its back, and large knobs on its head. These features distinguish the humpback from other whales in the family Balaenopteridae.

Humpbacks live in all the world’s oceans and are known for their breaching (jumping out of the saltwater) and singing. Males produce complex songs that are transmitted across great distances, perhaps serving to attract females and establish dominance.[3]

Like other large whales, the humpback was a target of the whaling industry. Once hunted to the brink of extinction, its population fell by an estimated 90% before a moratorium was introduced in 1966.

While the population has since partially recovered, entanglement in fishing gear, collisions with ships, and noise pollution continue to impact the 75,000 humpbacks worldwide.

The basking shark is a large filter-feeding shark found in temperate and tropical waters worldwide. The second-largest living fish after the whale shark, it can grow to an average length of 10 m (32 ft) and a weight of up to 4 tonnes (3.9 long tons; 4.4 short tons).

The basking shark is a slow-moving shark, spending most of its time swimming near the surface with its mouth open, filter-feeding on plankton. It is largely harmless to humans but has been known to attack when startled.

This giant shark was first described by Scottish naturalist Francis Buchanan-Hamilton in 1802, and its taxonomic placement has been the subject of much debate. It was formerly classified as the sole member of the genus Cetorhinus, but is now considered one of three members in the family Cetorhinidae, with the other two members being the megamouth shark and the goblin shark.

The basking shark’s specific epithet means “precursor” or “forerunner”, referring to its streamlined shape indicating an evolutionary link to the great white shark.

Giant squids are one of the most fascinating creatures in the sea. These massive animals can grow up to 60 feet long and weigh over 2,000 pounds. Despite their size, they are very shy and elusive creatures that are rarely seen by humans.

The Giant Squid lives in deep water and prefers to stay close to the ocean floor. They are predators who hunt for fish, crabs, and other smaller squid. Their diet also includes sharks, whales, and even other giant squids.

The giant Squid has a very strange appearance: a large body with long tentacles and a small head. Their eyes are huge and they have beak-like mouths. They are often called “the monsters of the deep”.

Despite their fearsome appearance, Giant Squid is not dangerous to humans. In fact, they are very gentle creatures. They have been known to attack boats and other large objects out of curiosity.

Giant Octopus is much smaller than the giant squid. It is a cephalopod mollusk of the order Octopoda. This animal is known to have large eyes and eight arms which are all connected to its mouth.

Giant octopus grows to an average size of 4.3 m (14 ft) in length and weighs around 15 kg (33 lb). They are found in the temperate and tropical waters of the world. It is a highly intelligent creature and has been known to escape from its aquariums.

The giant octopus is an apex predator, known to feed on fish, small sharks, seals, and even small whales. It is one of the few animals that is known to attack humans.

Narwhal, or Monodon monoceros, is a medium-sized toothed whale native to the Arctic Ocean. The most conspicuous feature of the male narwhal is its long, spiraled tusk, which can grow up to 3 m (9.8 ft) in length and is actually an enlarged tooth.

Narwhals are one of the few mammal species in which males and females look different from each other. Males are larger than females, with longer tusks and more prominent hoods. Females have smaller tusks and lack the hoods.

The narwhal is a relatively solitary creature, although it can be found in small groups of up to 10 individuals. They live for around 30 years, although some have been known to reach 50. It is hunted by humans for its meat and ivory tusk. Narwhals are also affected by climate change and the loss of sea ice in their Arctic habitat.

The narwhal is a member of the cetacean family, which includes all whales, dolphins, and porpoises. This whale is closely related to the beluga whale (Delphinapterus leucas) and the Bottlenose dolphin (Tursiops truncates).

Oarfish are large, long, and thin fish that are typically found in tropical and temperate waters. They are the largest member of the family Regalecidae, and can grow up to 11 m (36 ft) in length. Oarfish are very rarely seen by humans, as they prefer deep waters.

Oarfish are known to be an important food source for many animals, including sharks, whales, and dolphins. They are also considered to be a delicacy in some cultures.

The name “oarfish” comes from their long, oar-like fins. These fins can grow up to 3 m (9 ft) in length. Oarfish are believed to use these fins to “row” through the water.

Oarfish are covered in scales that are iridescent in color. They are also known to have long, ribbon-like tails.

Bull sharks are large sharks, with adults reaching lengths of up to 11 feet. They have a stocky build and a wide, flat snout. They are gray on the top and white on the bottom, with a distinctive black tip on their fins.

They can be found in warm, shallow coastal waters all over the world. They are especially common in the Gulf of Mexico and in the waters around Australia. Bull sharks often swim in rivers and can be found far inland from the coast.

As aggressive predators, they are known for attacking humans. They are responsible for many attacks on swimmers and surfers and are considered to be one of the most dangerous sharks to people.

The King Penguin is a marine bird that is found in the southern regions of the Earth. It is the second-largest species of penguin. It has a body length of about 70 to 100 cm and weighs between 9 and 15 kg.

The king penguin has a black head, white belly, and orange-brown back. Its bill is pink with a black tip. The king penguin is a proficient swimmer and can dive to depths of more than 100 meters in search of food.

The diet of the king penguin consists mainly of fish, squid, and krill. They breed on the Isles of Antarctica, South Georgia, and the Falkland Islands, where they lay their eggs in nests made of vegetation or in crevices.

Eggs are incubated for about two months. After hatching, the chicks are cared for by both parents. The king penguin is a social creature and can often be seen gathered in large groups called ‘rookeries’.

These charismatic birds are an important part of the Antarctic ecosystem and play a vital role in the health of the Southern Ocean.

What Do You Call the Animals That Live in the Water?

The animals that live in the water are called aquatic animals. There are many different kinds of aquatic animals, including fish, whales, dolphins, and sharks. Aquatic animals have a few things in common. They all live in water, they all breathe through gills, and they all have fins or flippers to help them swim.

What Is the Most Common Animal in the Sea?

The most common animal in the sea is not a fish, but a tiny crustacean called krill. These shrimp-like creatures are an important part of the ocean food chain and are a major food source for whales, penguins, and other marine animals.