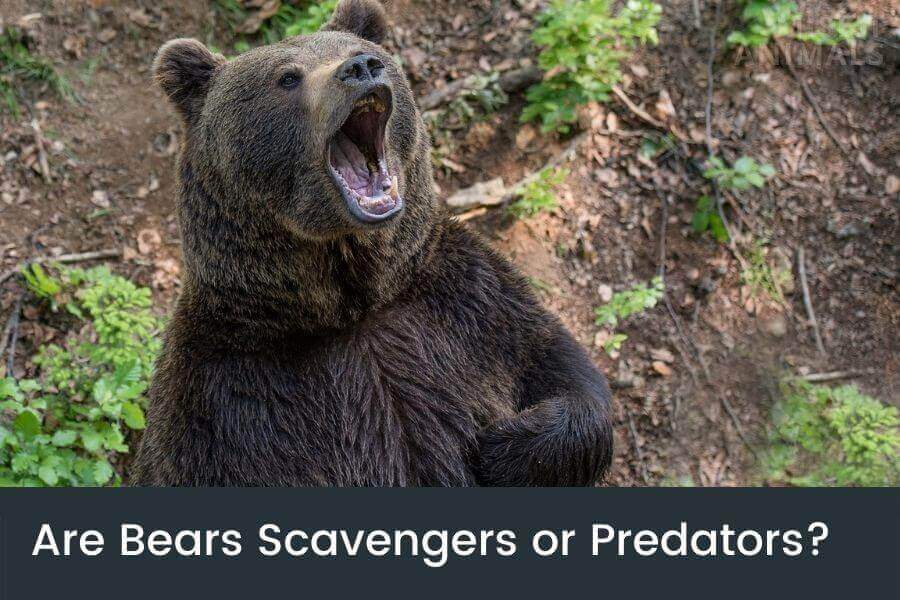 Bears are scavengers and predators. They both forage for food by killing other animals, but also by gathering scraps and leftovers from other animals, or humans.

Bears are very versatile. For starters, they eat both plants and meat, something very few animals do.

They will eat anything that is available to them, including the remains of dead animals.

Additionally, they’re very versatile in the way that they gather their food.

In this article, we’ll take a look at exactly this: how bears forage, and why they do as they do.

How Do Bears Forage for Food?

Bears both hunt and scavenge. If there’s anything to scavenge, they don’t mind eating remains of dead animals, but if nothing is available, they’ll turn to hunt.

Bears are known to be opportunistic feeders, which means they’ll take advantage of any food source that is available to them.

While most bears primarily eat plants, as they are omnivores, they do also eat a lot of meat.

There are two ways of acquiring meat in the wild:

Bears do both. While they don’t mind hunting, they will take advantage of a dead animal carcass laying around.

Both scavenging and hunting are important to the health of the environment. Hunting keeps the population of prey animals down, while scavenging helps recycle nutrients into nature.[1]

Yes, bears are scavengers. They eat the remains of dead animals, leftovers from other predators, and will even scavenge from human garbage.

It’s not uncommon for bears to look for an easy meal by finding the remains of a dead animal, ripping off strings of meat, or gnawing at the carcass.

Bears are predators in the wild[2]. In other words, they hunt animals, kill them, and eat them.

Bears are opportunistic feeders, and they will take advantage of any opportunity that comes their way. This makes them versatile predators, and it also helps them survive in the wild easier.

Bears are not the only predators in the forest, but they are one of the few apex predators.

An apex predator is a predator which is not preyed upon by other animals.

Bears are very powerful animals, and they have sharp claws and teeth that help them kill their prey. They also have a keen sense of smell, which allows them to find food, even in difficult conditions.

Are Bears Primarily Hunters or Scavengers?

Bears are opportunistic feeders, meaning they’ll eat whatever is easiest. If there’s anything to scavenge, they’ll do that. But they are also hunters. They’ll stalk and catch their prey if they can.

Bears are both scavengers and hunters. They’ll generally eat whatever is easiest to acquire.

Their diet depends on what’s available in their environment. In some areas, there are more opportunities to scavenge, while hunting is more common in other areas.

Bears are highly capable of both scavenging and hunting. Due to their omnivorous diet, they almost always have access to food in one way or another.

What Animals Do Bears Scavenge From?

Bears typically live in areas with other predators, such as wolves, foxes, birds of prey, tigers, cougars, and other animals.

From time to time, they’ll scavenge the remains of their leftovers.

Bears will eat remains left by wolves. This includes dead animals that are left behind by wolves after hunting trips, or any food left at den sites when the wolves leave the site.

Bears not only eat the leftovers from wolves, but they’re also more healthy when doing so. When wolves and bears live in the same areas, bears’ diet improves.[3]

Wolves are also scavengers, which can result in negative encounters from time to time. The two species have been known to fight over carcasses.

Bears do rummage through human garbage. They don’t mind digging through dumpsters for food. If there are any leftovers, they’ll eat them. This includes anything from meat to vegetables.

In some cases, bears have been known to break into homes and steal food that’s inside. They are also attracted to campsites because of the smell of food.

When camping in bears territories, you need to take precautions. Keep your food locked up and away from the bears’ keen sense of smell.

Bears are scavengers, so they will eat whatever is available. While they tend to keep their distance from humans, they don’t mind getting close to civilization, if there’s a chance of an easy meal.

Yes, black bears are scavengers. While they mostly eat plants, they do also eat meat and take part in both hunting and scavenging for food.

Black bears are very resourceful and will take advantage of any opportunity to find food. If there’s anything to scavenge, they won’t mind eating the remains of dead animals.

They are also known to raid garbage cans and campgrounds in search of food.

Black bears are typically not as aggressive as other bear species, but they can still be dangerous if provoked.

Yes, grizzly bears are scavengers. They are opportunistic feeders and will take advantage of any opportunity to eat. They’re very large, and they eat a lot.

The scavenging habits of grizzlies are beneficial to both the bears and the environment. By eating the remains of dead animals, grizzlies help to clean up the forest and keep it healthy. They are an important part of the ecosystem.

Scavenging is an important survival skill for grizzlies. It allows them to take advantage of any opportunity to find food and helps them to stay alive in harsh environments.

Grizzlies are well-equipped for scavenging and are able to scavenge on a variety of different food sources.

Yes, polar bears are scavengers, however, they hunt more than they scavenge, due to the lack of other predators in their natural habitats.

Polar bears are well-adapted for scavenging. They are able to scavenge on a variety of different food sources.

However, polar bears typically live in colder environments and are the only apex predators much of the time. In other words, polar bears are exposed less to available carrion than other bears.

Bears are omnivores, meaning they eat both plants and meat. This makes it easy for them to find food.

Bears are known to eat a variety of things, including berries, honey, insects, salmon, small mammals, and carrion (dead animals).

Bears are not picky eaters and will consume whatever is available to them. This sometimes leads them to eat garbage or human food. While this is not ideal for the bear, it does provide them with the necessary nutrients.

Bears are opportunistic predators that will scavenge if the opportunity presents itself, but they are also skilled hunters. While bears will consume just about anything they can find, they mostly eat plants.