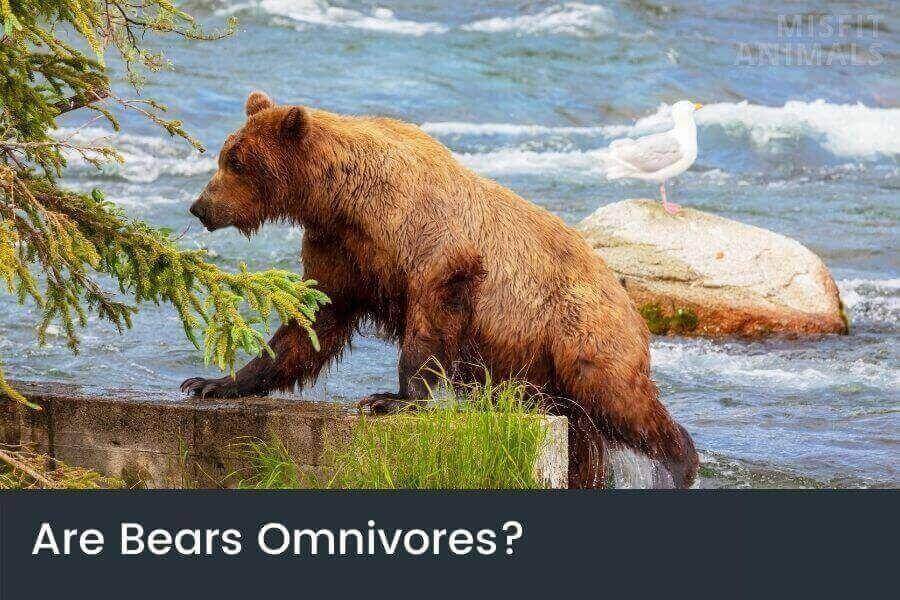 Bears are omnivores as they eat both plant matter and meat. They are not strictly carnivores or herbivores but instead fit somewhere in between the two classifications.

Bears eat a lot. They can eat about 30 pounds of food in a single day. But what type of food do they eat?

All beings fit into one of three categories: carnivore, herbivore, or omnivore. While most bears fit into the last one, not all species do.

In this article, we’ll take a look at bears’ diet, as well as which bears are herbivores, carnivores, and omnivores.

What Is an Omnivore?

An omnivore is a being that can eat and digest both plants and meat. They are not limited to a single type of food. This makes them adaptable and able to survive in a variety of environments.

This type of creature is able to switch between food sources to ensure they get the nutrition they need. This makes them ideal for survival in many circumstances and environments.

They are many different types of omnivores. These include deer, bears, birds, and humans to name a few examples.

Besides omnivores, animals can also be consideres carnivores or herbivores.

Yes, bears are omnivores. Their diet is about 80% plants and 20% meat. While their diet does change according to season, they eat both meat and plants all year.

As animals are split into carnivores, herbivores, and omnivores, bears fit into all three. Now, most bears are omnivores, but not all of them.

Their diet is not only dependent on species though, but also seasonality.

For example, in the summer bears will mostly eat berries, fruits, and insects. But in the winter, they will eat more meat such as deer or elk.

Polar bears are carnivores. The rest of them aren’t, even though they still eat meat. About 10-30% of a bear’s diet is animal-based. Bears feed on insects, fish, small mammals, and ungulates.

Carnivores are animals that only, or primarily, feed on meat for sustenance.[1]

As bears feed on both plants and meat, depending on availability, season, and species, they aren’t fully carnivorous. At least not most bears.

Polar bears are however considered carnivores. Their largest food source consists of seals.[2]

No, bears are not herbivores, but they do eat a lot of plants[3]. Most of their diet consists of plants. While berries are their favorite, they also eat grasses, seeds, nuts, and other vegetation.

Most bears feed primarily on plants, which make up 60-90% of their diet. Bears are opportunistic feeders who are not picky about what they eat.

This isn’t true for all bears, and Pandas are exclusively herbivores.[3]

The biggest animals throughout time have always been herbivores, excluding animals that live in water, such as whales. This is because plants are more accessible, and may explain why bears are larger than all other meat-eating predators on land.[4]

Why Are Bears Omnivores?

Bears have an elongated digestive tract, an adaptation that allows them more efficient digestion of vegetation.

The interior of a bear’s stomach has many ridges that are used for grinding up tough plant matter.

They’ve most likely evolved into omnivores because of the abundance of food out there.

Bears, as we know them today, evolved from an ancient species about 30 million years ago. While their ancestors were carnivores, they evolved the ability to eat plants along the way.

Are All Bears Omnivores?

Interestingly enough, not all bears are omnivores. Polar bears are categorized as mostly carnivorous, as they almost exclusively eat meat.

Polar bears are found in Canada and Alaska. They are also seen on land sporadically throughout Russia and other parts of Europe due to climate change effects.

These are all areas where polar bear habitat is shrinking as sea ice continues to melt away quicker each year than it can replenish.

In most cases, a polar bear will almost only eat meat. This is because plants can’t grow where polar bears live. Hence, they’ve evolved to solely rely on meat for nutrition.

Bears have a very diverse diet and are highly adaptable to their situations. Most bears eat the following:

Depending on the species, they may consume more or less of some of the things than other bears.

Plants are the main part of a bear’s diet, they are 80% of plants most are berries, fruits, and nuts. There are also grasses, roots, and leaves that they eat.

The time when these foods are available changes throughout different seasons but bears still eat both meat and plant matter in each season.

Insects are not only a good source of protein but are also low in fat. They are also rich in vitamins and minerals.

Wild animals like beavers or bears are known to eat insects as part of their diet during winter times when vegetation is scarce. The bugs can contain up to 70% protein.

Small Mammals are a large part of the diet for all bears, including polar bears. Some are also known to scavenge carrion. This includes seals as well – meat from whales is often consumed by both brown and black bear species.

Most adult bears are quite selective in which small mammals they hunt: squirrels are rarely eaten by even grizzly or Kodiak bears but are commonly fed upon when found dead in trees.

Fish are an important part of a bear’s diet, especially during the summer months. Salmon is a favorite food for bears and they can be found in rivers and streams throughout North America. Bears will also eat trout, char, whitefish, and suckers.

Bears have been seen diving up to 100 feet deep when looking for food such as salmon or crabs. Even though they prefer fish over anything else it is hard to catch because there are a lot of other animals that like eating fish too so if you see a bear fishing doesn’t get any ideas about stealing its dinner.

Ungulates are animals that have hooves. Deer, elk, moose, and caribou are all examples of ungulates. Ungulates are herbivores and eat mostly plants. They also eat some bark and leaves. This is necessary to get the nutrients they need to survive.

Bears are omnivores and are opportunistic feeders. They are known to eat ungulates when they can find them, but there are no set rules as to what bears will hunt or not.

Bears’ diet changes according to the season. This seasonal change happens because of the natural flow of nature. Plants bloom in the spring, and they become inactive in the winter. Hence, bears adapt.[6]

Bears will also eat insects and fish when they are available[3].

Despite these seasonal changes, bears still consume both meat and plants on a regular basis. This helps them stay healthy and survive in different environments.

A bear’s diet is also determined by the region that they are living in, as well as their species.

While most bears are omnivores, polar bears are carnivores, and panda bears are herbivores.