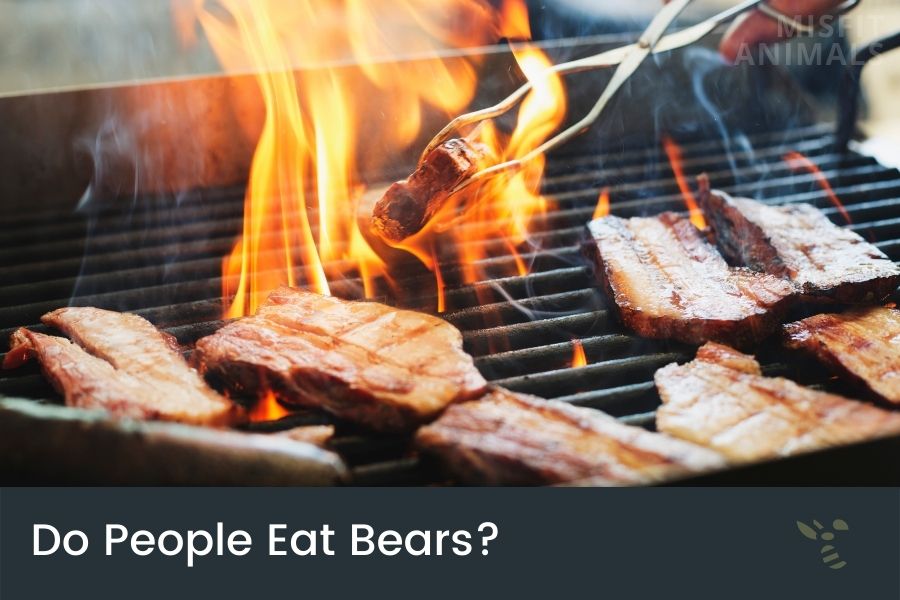 People do eat bears. In fact, bear meat is a traditional food in America. For hundreds of years, North America’s native tribes, settlers, and frontiersmen have consumed it.

Most people are used to eating meat from cows, chickens, pigs, and other domesticated animals.

But what about the wild game? Do people eat bears?

While some people might find the idea of eating bear meat unappetizing, others believe that it is a healthy source of protein. Let’s take a closer look at this controversial topic.

Yes, some people do consume bear meat. Bear meat is a traditional food in America. For hundreds of years, North America’s native tribes, settlers, and frontiersmen have consumed it.

Today, bear meat is still enjoyed by some people. There are many ways to prepare bear meat, including frying, baking, and smoking.

Some people believe that bear meat is healthy due to its high protein content. However, it does have a high-fat content. Others believe that eating bears can help conserve the population of bears.

However, there are also some risks associated with eating bear meat. Bears can carry diseases, and the meat can be contaminated.

What Is Bear Meat Called?

Bear meat is simply called bear meat. It doesn’t have a name, such as beef. This is most likely because bear meat isn’t a common food item. Few people in the world eat it on a regular basis.

Some people may refer to bear meat as “venison.” Venison originally described meat from the wild game but is used mostly about deer meat nowadays.

Are Bears Hunted for Their Meat?

Bears are hunted for their meat in some parts of the world, but it is not a common practice. In North America, bear hunting is regulated by state and federal agencies.

The main reason people kill bears is to protect public safety. Bears can be dangerous when they’re threatened.

While they usually don’t attack people, they may if agitated.

Bears are not only hunted for meat, or as protection, but also for their fur.

Bear hunting is a tradition in some parts of the United States, but it is not as common as it used to be. There are more restrictions on bear hunting, and the number of bears that can be hunted has been reduced.

This is because there is a growing awareness of the importance of preserving bears populations.

Regulations on bear hunting have been reduced in recent years.[1]

Meat from black bears can be eaten, and some people do exactly that[2]. This has been done for hundreds of years. They’re not endangered, and the population is rising. Hunting black bears is a popular sport. Some people do it to put food on the table, while others do it for fun.

Black bear meat is considered a delicacy by some. It’s very healthy and has a unique flavor that many people enjoy. It’s high in protein and fat and contains all of the essential amino acids.

Although there are countries, like the US, where hunting of the polar bear is banned (or at least regulated), polar bears have long been hunted for meat and are considered as a nutritious food source.

In some areas, the hunting of polar bears is still allowed.[3]

The Inuit people eat polar bears as a staple food. They hunt them extensively and eat their meat. Their fur is also used for clothes and shelter. Many indigenous tribes consider the killing of these creatures as crucial for existence.

Brown bears in Alaska and North America have long been hunted for their meat, which is said to taste similar to black bear meat.

Many people enjoy bear hunting and some hunt grizzlies and browns for their flesh. Most trophy hunters want to shoot these animals for their size or pelts.

Grizzly or brown bear meat is frequently slow-cooked to make it more tender. Some people ground the flesh into burgers, sausage, or tacos. Others may smoke or dry the meat to store it.

The taste of bear meat differs depending on what they feed on. Most hunters don’t like bear meat if they’ve been feeding on fish. The meat from bears isn’t as red as venison or cattle meat, but darker.

Bear meat is abundant in nutrients and fibers and has a chewy texture, somewhat similar to beef, but not as tender. Some say it tastes a little like pork, others liken the flavor to lamb.

The flavor of bear meat differs greatly depending on their diet. Meat from bears that feed on lots of fish is less desired.

How to Cook Bear Meat

It’s important to cook bear meat slow, such as a stew braising, or cooking in a Crock-Pot. Bear meat is often tough and needs to be cooked low and slow to make it tender.

If you’re planning on cooking bear meat, you should do so slowly. The meat can very easily become chewy, and take a long cooking time to become tender.

A marinade can also help to tenderize the meat. Try using a mixture of olive oil, red wine vinegar, garlic, salt, and pepper.

Another option is to grind the bear meat up into burger patties or sausage links. This will help it cook faster and more evenly.

If you do choose to fry or grill the bear meat, make sure it’s very well done so that any harmful bacteria are killed off.

Bear meat has both pros and cons. On one hand, bear meat is high in protein and iron, making it a healthier alternative to other meats[4]. Also, free-range bears have fewer pollutants in their meat than factory-farmed animals.[5]

However, bears can carry diseases like brucellosis and trichinosis, so it’s necessary to carefully boil their flesh to destroy harmful bacteria.  It’s also high in fat.

Is It Legal to Hunt Bears?

It’s legal to hunt some bears, but not all species. You typically need a hunting permit to kill bears. There are also regulations, such as the number of bears you’re allowed to kill with each permit.

In most cases, black bears may be hunted during open season. With a permit, you’re allowed to hunt one bear of each sex[6] (regulations may vary depending on state and country).

Brown and grizzly bears are large game creatures that can only be hunted with a permit and during designated seasons.

While bear meat is a traditional American dish, other game meats are also eaten. Deer, elk, and moose are examples. Most game meat shares one trait, which is that it’s not as tender as meat from domesticated animals.

Deer meat is popular game meat. It’s delicious and healthful. Deer are hunted around the country, and the meat is prepared in various ways.

Another popular game of meat is elk. It’s a touch rougher than deer meat, but it has a great flavor. Elk is a versatile meat that may be prepared in a variety of ways.

Bear meat is a traditional food in America. For hundreds of years, North America’s native tribes, settlers, and frontiersmen have consumed it.

Bear meat is high in protein and fat. It also contains important nutrients like zinc and iron. Although there are some risks associated with eating bear meat, such as the possibility of contracting trichinosis, these can be avoided by taking proper precautions when hunting or preparing the meat.