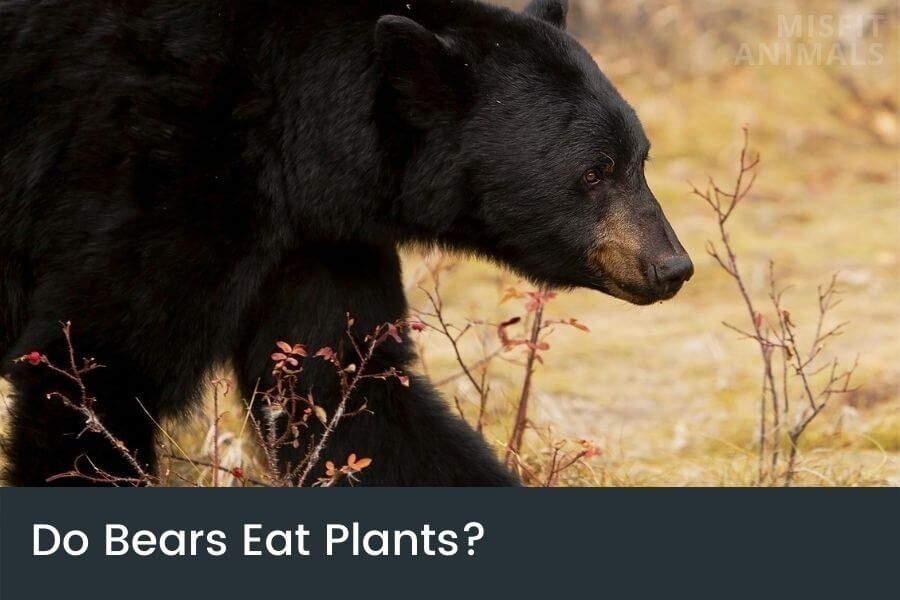 Yes, bears do eat plants and fruit. They’re omnivores, meaning they feed on both plant matter and animals. Bears are both hunters, scavengers, and gatherers.

Different animals have evolved different feeding habits. This comes down to their natural evolution. While most animals are either carnivores or herbivores, 3% of animals are omnivores.

There are eight different species of bears, each with their different dietary preferences.

So what do they really eat? Plants? Meat?

In this article, we’ll provide you with an answer to the question of whether bears really do eat plants, and if so, which ones do they eat? And how many?

Yes, bears eat plants. Most bears are omnivores and hence eat both plants and meat. Plants make up 60-90% of grizzly and black bears’ diet, while they only make up 0-10% of a polar bear’s diet.

The majority of a bear’s diet comes from plants. This helps them get the nutrients they need to survive in the wild. Bears have specially adapted digestive systems that allow them to digest fibrous foods like plants very well.

Bears have a less specialized digestive system than other predators. This allows them to process both plants and meat.[1]

Bears are one of the few animals that can digest large amounts of cellulose, which is a type of plant fiber.

This helps them digest plants that many other animals cannot eat. Bears also consume a lot of fruit, which gives them important nutrients like Vitamin C and antioxidants.

Black bears and grizzly bears consume a lot of berries, while panda bears eat mostly bamboo (a type of plant) and other types of vegetation.

Polar bears do not typically consume many plants, their diet is mostly made up of animals such as seals, walruses, and whales.

What Plants Do Bears Eat?

Most bears are primarily herbivores or plant-eaters, meaning they most of all eat plants[2].

Seven out of eight species of bears mostly feed on plants, including:

Bears are not picky eaters and eat whatever is available. They eat a variety of plants depending on their location.

Panda bears are herbivores, meaning they only ingest plant matter, such as bamboo and vegetables.

Yes, bears do eat fruits. They often do this during the summer and fall, when fruits are widely available.

Bears don’t just hunt for food. They also gather it, scavenging for remains of fruits on the ground.

Not only that, but they also climb into trees to get a hold of the tasty, sugary, and calorie-dense foods.

Research shows that this mixed-diet strategy in bears helps them avoid potential deficiency of the following minerals[3]:

Panda bears are much different. They do not spend as much time searching for fruit in forests since they are naturally vegetarians.

Instead, Pandas have a more varied diet consisting of bamboo, fruits, and other plant matter.

What Fruits Do Bears Eat?

While different bears have different preferences, most bears enjoy eating a variety of fruits.

Some common bear favorites include:

In the wintertime, when fruits are not as readily available, bears will eat things like acorns, pine nuts, and huckleberries instead.

Pandas eat around 26 to 84 pounds per day (11 to 38 kg) of bamboo every day, but they’ll also consume other types of vegetation, including fruit.

While all bears are plant-eaters, the type of plants they feast on differs depending on their geographic region.

And pandas living in China love to munch on bamboo shoots and leaves, but will also snack on apple trees, watermelons, and oranges when available.

What Berries Do Bears Eat?

One thing all bears have in common is that they love to eat sweet things.

Berries are a great source of natural sugar, which provides the bears with plenty of energy for their active lifestyle. Not only do the berries taste good, but they’re also packed full of nutrients that help keep the bears healthy.

Aside from berries, bears also enjoy feeding on honey. This again shows the tendency and attraction to sweet foods.

Do All Bears Eat Plants?

Yes, all bears eat plants, but some eat more than others[4]. Polar bears are considered carnivores, and hence eat the least plants of all species, approximately 0-10% of their diet. Pandas are the most plant-eating bears as they only eat plants.

Most bears are herbivores, which means they feed on both plants and meat. However, the diet varies depending on species, as well as location and season.

For example, black bears living in northern areas mostly eat insects and fish during the summer months when those items are more available.

On the other side of the spectrum is the polar bear. These bears almost exclusively eat meat from animals they hunt, as plants don’t grow very well in their habitats.

Black bears are omnivores, meaning they eat both meat and plants. However, black bears are more herbivores than carnivores. Black bears have a very diverse diet that includes over 600 different types of plants.

The majority of a black bear’s diet (up to 90%) is plant matter.

While black bears do eat some meat, such as small mammals, insects, and fish, the majority of their caloric intake comes from vegetation.

The main reason why black bears consume so much plant matter is that it’s nutrient-rich and calorie-dense. A single pound of blueberries can provide a black bear with up to 250 calories.[5]

Some of the common plants that black bears eat include:

Black bears also eat a lot of vegetation such as grasses, sedges, ferns, tubers, bulbs, and cambium (inner bark). They will also consume mushrooms, lichens, and even honey.

Yes, pandas are herbivores, meaning they only eat plants. They don’t eat meat. Panda bears eat a lot of different types of plants, such as bamboo, fruits, and vegetables.

Pandas are the only bear species that don’t eat some sort of meat (less than 1%).

While they’re extremely fond of bamboo, they also eat leaves, stems, and bark from trees and other plants.

Panda bears get most of the water they need from the food they eat. They do not usually drink water from streams or other sources.

Pandas use their powerful jaws to chew through tough plants. Their teeth are specially adapted for grinding up bamboo shoots and stems.

Bears are omnivores who eat plants, fruit, and berries. While this is true for most bears, the polar bear is an exception, as they mostly eat meat.

Other bears, such as black bears and grizzly bears, eat a lot of berries. These are high in calories, high in vitamins, and full of antioxidants, which are all necessary nutrients.